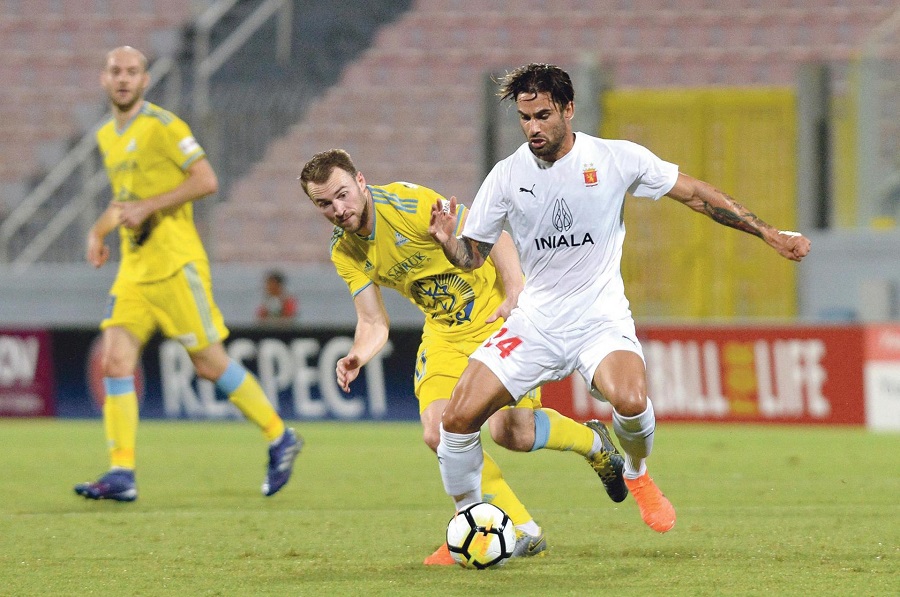 Goals from Roman Murtazayev and Marin Tomasov helped Astana reach the Europa League play-offs last week, after a 4-0 shutout win over Valletta for the second time in a row. / Times of Malta

Three teams from the Caspian region are set to enter the playoffs in the UEFA Europa League group stages.

Goals from Roman Murtazayev and Marin Tomasov helped Astana reach the Europa League play-offs last week, after a 4-0 shutout win over Valletta for the second time in a row. Murtazayev scored in the 25th minute of Thursday’s game, followed by a goal from Marin Tomasov in the 37th minute. During the second half, Murtazayev scored another goal, while Tomasov completed the scoring in 89th minute, crushing the team from Malta.

“We left for Malta with the thought of victory, and, thank God, we managed to win,” said Murtazayev after the match, according to reports by Prosports.kz. “Despite the score, we still have a lot work to do and need to improve.”

Astana will face BATE from Belarus for a place in the Europa League group stages. The first leg will be in Nur-Sultan next Thursday, with the return match taking place in Minsk on August 29.

“BATE is already a brand in football [soccer] as they have achieved a lot in Europe. They have a very competently selected composition and a very experienced coach. So we are waiting for very serious matches, and we should be best prepared for this confrontation,” said Astana’s head coach Roman Grigorchuk, according to reports by Footboom.

The group stage will consist of 22 winners from the playoff round and 10 losing teams from UEFA Champions League playoff round, which runs parallel to the Europa League and is considered more prestigious.

Russia’s Spartak had secured its place in the playoffs after beating Switzerland’s Thun. In the first half of Thursday’s match, the guests from Switzerland came forward after Stefan Glarner scored the debut and last goal for his team. Spartak claimed victory over Thun, scoring two goals in the second half. Playing in front of 33,000 fans, Ezequiel Ponce scored a goal in the 52nd minute of the game, followed by another goal from André Schürrle in the 58th minute.

Spartak is now just two games away from reaching the Europa League group stage. Next week, they will face Braga, who beat Brondby from Denmark on aggregate. The two games against the Portuguese team will take place on August 22 and 29.

Meanwhile, the 2-1 defeat away to Bnei Yehuda saw Azerbaijan’s Neftchi exit the Europe League at the third qualifying round stage. During the second leg on August 15, Dor Jan and Tamabi Sages gave Bnei Yehuda the lead and a consolation goal from Emin Mahmudov in the dying 93rd minute did not save Neftchi from defeat. The previous game with the Israeli team ended with a draw.

Qarabağ will go into next week’s play-offs to meet the Irish Premiership champions, Linfield.