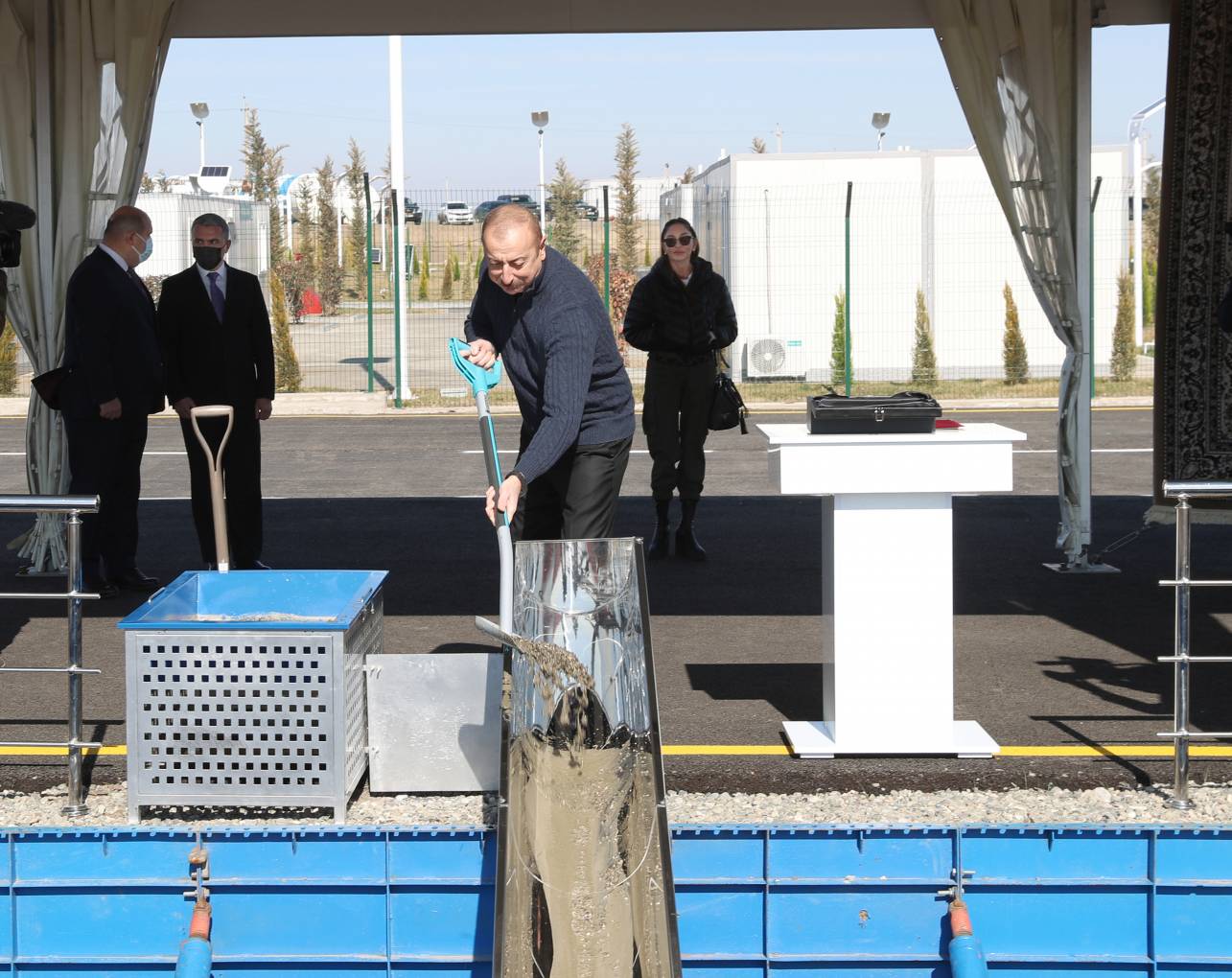 The first construction work on the production units of resident enterprises in the Aghdam Industrial Park in Azerbaijan’s Karabakh region ushered in a new era for the region’s economic revival after decades of illegal Armenian occupation.

As part of his visit to the Aghdam district on February 13, President Aliyev attended the groundbreaking ceremonies for the production facilities of Smartpoint LLC and Dadash-N LLC - two of five resident companies registered in the newly created industrial hub.

Smartpoint LLC will reportedly produce light poles and devices powered by renewable energy sources, including mainly solar energy. The investment cost of the project is $5.4 million. The production facility will use cutting-edge technologies procured from Turkish and Italian manufacturers. The annual production capacity of the enterprise is expected to be around 21,000 light poles and other devices with a capacity of 40 megawatts (MW) of power. Eighty people will be permanently employed at the facility, which will come online six months after the start of its construction. The goods churned out by Smartpoint LLC will go on sales both in the domestic market and those in Georgia, Kazakhstan, and Uzbekistan.

Dadash-N LLC will produce a variety of synthetic carpets at the production unit to be built in the Aghdam Industrial Park. The investment cost of the project is estimated at $5.6 million. The volume of the annual production at the facility will be 700,000 square meters (7.5 million square feet) of carpets. Locally made polypropylene, polyethylene and polyacrylic will make the largest part of the unit’s raw material stock. Equipment for the production complex will be procured from Belgium and China. The plant, due to become operational within 24 months from the start of construction, will employ 60 workers. Dadash-N LLC considers overseas markets in the Commonwealth of Independent States (CIS) countries as the main export destinations in addition to domestic market supplies.

The Aghdam Industrial Park is supposed to turn Aghdam into a super modern and sophisticated industrial center of the entire Karabakh region. President Ilham Aliyev laid the foundation for the park in May 2021. The priority areas of the park, which covers 190 hectares (469 acres) of territory, are the production of construction materials, packaging of agricultural products, canned fruits and vegetables, meat and dairy products, production and processing of feed, fertilizers, as well as refrigeration, storage, and other services.

Currently, there are five registered residents at the Aghdam Industrial Park. More than 10 projects submitted by entrepreneurs are being considered for realization including in the production of ventilation systems, firefighting equipment, and metal products, concrete production, maintenance of heavy machinery, production of orthopedic mattresses and soft furniture, production of sewerage and drinking water pipes, and etc.

Aghdam is one of the Azerbaijani districts liberated from the Armenian occupation as a result of the 44-day war in 2020. The district suffered from Armenian vandalism to the largest extent during 27 years of occupation since 1993. Aghdam has been referred to as a “ghost town” and “Hiroshima of Caucasus” due to the scale of destruction caused by Armenians. International analysts labeled Aghdam as the planet’s “largest home depot” as Armenians plundered and ransacked the district’s properties to use as building supplies.

Currently, Aghdam is being revived as part of the post-war reconstruction and restoration campaign rolled out by the Azerbaijani government. In May, President Aliyev broke ground for the construction of new highway and first “smart” residential building in Aghdam. A total of 1,750 houses and 23,000 apartments will reportedly be built in Aghdam. Seventy percent of the city’s population will live in apartment buildings and the rest 30 percent in private houses.

During last week’s visit to Aghdam, President Ilham Aliyev has also laid the foundation stones for Aghdam Central Hospital, a 209-apartment residential building, and a hotel. The Azerbaijani president has also visited the Imaret complex of the Karabakh khans and the Aghdam Juma Mosque, which are currently being restored.