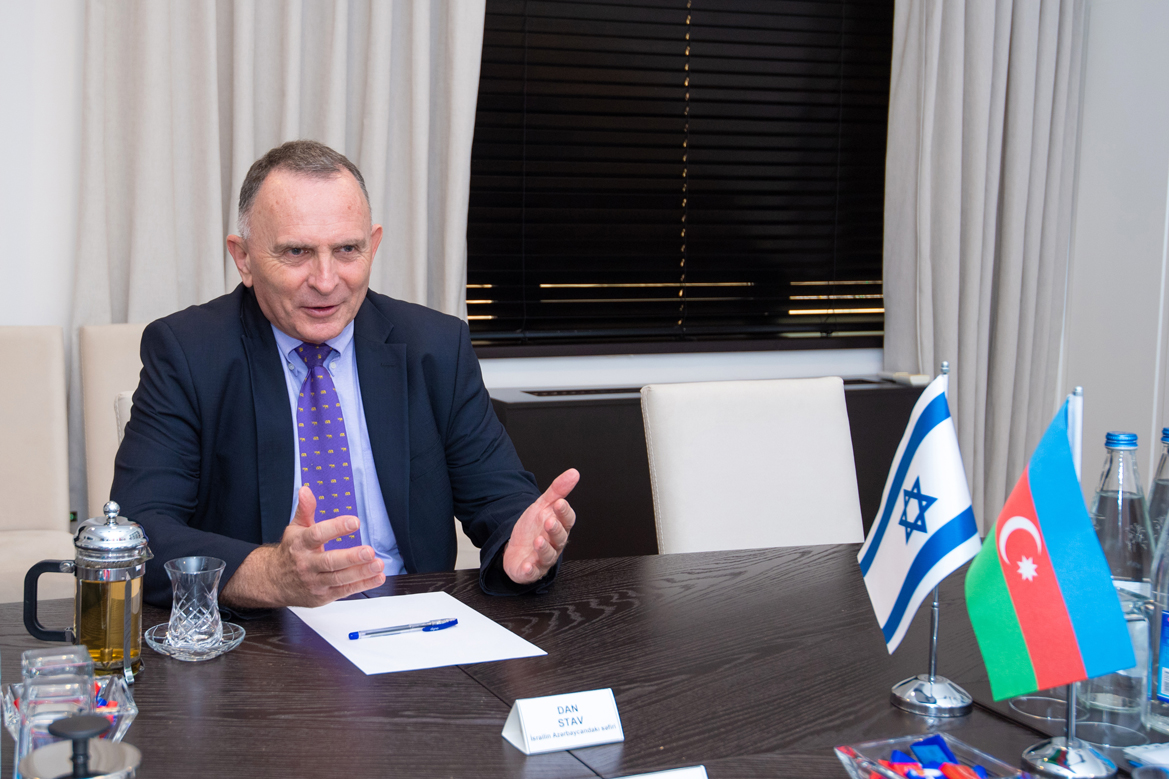 Dan Stav served as Israel's ambassador to Azerbaijan in 2015-2019 / Economy.Gov.Az

Israel’s ambassador to Azerbaijan, Dan Stav, will be leaving his diplomatic post after four years of service in the Caspian region country. Before departing, Stav gave an interview to Trend, during which he commented on Israel’s relationship with Azerbaijan, including Israel’s position on the Armenia-Azerbaijan Nagorno-Karabakh conflict.

“The consequences of the conflict, if it continues, can go beyond the region,” Stav noted on Tuesday, adding “We support the territorial integrity of Azerbaijan.”

“We are for a peaceful resolution to the conflict. We also support the efforts of the OSCE Minsk Group in this regard. Azerbaijan and Armenia must find a solution that will be acceptable to them.” Stav was referencing the body set up in the 1990s by the Organization for Security and Co-operation in Europe, which is co-chaired by diplomats from Russia, the United States and France.

Stav’s tenure in Baku kicked off in August 2015, meaning he was posted in the capital when the conflict between Armenia and Azerbaijan flared up to its worst point since the ceasefire in 1994. From April 1-4 in 2016, armed forces from the two sides fought a short but bloody war that broke out after the Armenian military attacked civilians in Azerbaijani villages. That war was later called the “Four Day War” or “April War.”

The war claimed the lives of 30,000 ethnic Azerbaijanis and displaced one million from their homeland. In Shusha, located in the region’s highlands, 200 people were killed, 150 were injured and 22,000 were displaced.

Israel has been a strong supporter of Azerbaijan and its territorial integrity.

Avigdor Lieberman, Israel’s defense minister from 2016-2018, said a look at the map is enough to understand that the position of Azerbaijan on the conflict coincides with relevant facts of history, geography and demography.

“We certainly support the people of Azerbaijan. Azerbaijan pursues rather balanced policy in this issue,” he said in a previous interview with Azertag.

Israel's cooperation with Baku extends beyond diplomacy and policy support, however, and includes defense cooperation.

The modernization of Azerbaijan’s military is being made possible thanks in part to Israeli arms sales. According to data compiled by the Stockholm International and Peace Research Institute, Azerbaijan was the second-largest buyer of Israeli arms, accounting for 17 percent of the country’s arms exports. In 2017, Baku paid $137 million for Israeli weapons. Azerbaijan’s President Ilham Aliyev noted a year earlier that the contracts between Azerbaijan and Israeli companies with respect to purchasing of defense equipment had reached $4.85 billion.

Israeli domestically produced Harop kamikaze drones are just one such weapon system said to be in the Azerbaijani army’s arsenal, which were reportedly used during the April War. Earlier this year, officials in Baku agreed to purchase SkyStriker drones from Elbit Systems, an Israeli electronics company – the first foreign export deal for the drone.

Baku sees upgrading its military as imperative to the country’s defense posture, as it is poised against the backdrop of a conflict that continues to this day through ceasefire violations by Armenia's troops stationed along the Line of Contact in the occupied lands of Azerbaijan. Despite the OSCE Minsk Group’s mediation efforts and four resolutions adopted by the United Nations Security Council against Armenian occupation, Armenia's troops continue to occupy the Nagorno-Karabakh region and the surrounding districts, meaning the South Caucasus is always on edge.