From Summer To Spring: How Seasonal Change Could Affect 2018 Formula 1 Azerbaijan Grand Prix 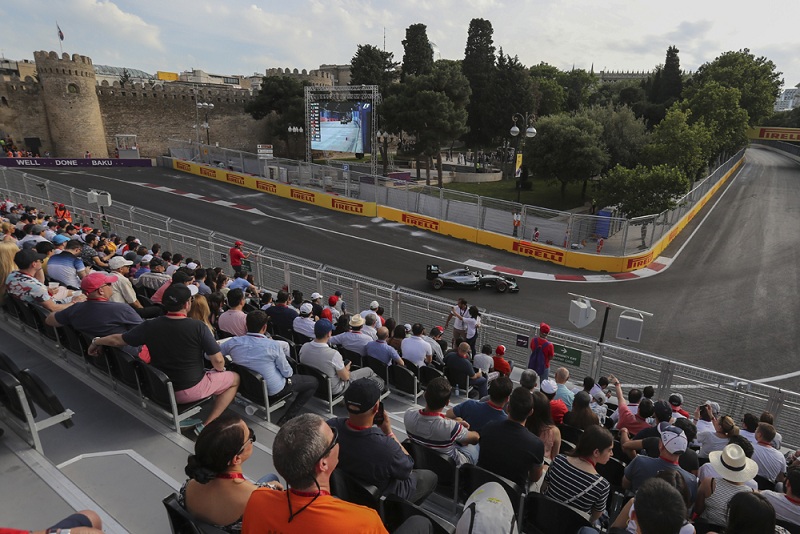 Fans watching the Formula One racing in a grandstand near the Icherisheher or the Old City in Baku, June 2017 / Baku City Circuit

The Formula 1 Azerbaijan Grand Prix race is more than five months away, but it already has people talking – about the weather.

Baku is scheduled to host what will be its third consecutive Formula 1 race from April 27-29, 2018. The last two races were held in the summer, but next year’s tournament is seasonally different, causing organizers, sports analysts and motorsport fans to be concerned about the outcomes, including spectator attendance.

“This is true that the average precipitation rate in April in millimeters is higher, but it is unknown which days it will be raining,” the head of Baku City Circuit’s Commercial Department Bülent Özderim told Caspian News.

“Rainfall and periodical rains could, of course, affect the interest and entertainment activities of the spectators. However, we’re doing our preparations, planning our activities in all of our facilities, including the grandstands, entertainment spaces, food court, and concert zone with considering the possibility of rainfall.”

While the lowlands in the eastern and central parts of the country receive the lowest amounts of rainfall, highland mountainous areas, in the west, get more. Baku is located on the Absheron peninsula, which juts into the Caspian Sea, at the very eastern edge of Azerbaijan, where semi-desert, low-precipitation climate is typical.

Gulshad Mammadova, the head of the Forecast Bureau of the National Hydrometeorology Department at the Ecology and Natural Resources Ministry of Azerbaijan, said that to expect rainfall in April is not exceptional, but trying to predict if it will rain during the three days of the Formula 1 race is impossible at this point.

“Rainfall is usually observed in Azerbaijan in April. However, it is not possible to say whether it will be raining during the days of Formula One racing in Baku or not,” Mammadova told Caspian News.

The last Formula 1 Azerbaijan Grand Prix race, which was held from June 23-25 this year, attracted over 70,000 fans. Around 35 percent of them were from 65 different countries, including the Caspian basin’s Russia, Iran, and Kazakhstan, as well as the United Kingdom, Ukraine, the United Arab Emirates, Iran, Turkey, the U.S. and Finland.

As the Baku City Circuit aims to increase sales for next year’s event, motorsport experts claim racing in wet weather conditions in intra-urban Formula 1 circuits like that in Baku will not negatively impact the interest of fans.

“I hope that the audience will not be scared off by the rain! And it will attract more TV viewers, by the way. In the rain, the race is always even more interesting and unpredictable,” Alexander Popov, a Formula One Commentator in Moscow, told Caspian News.

“And then there's the city track! So I would not be afraid of rain - this, on the contrary, can bring its own color,” Popov said.

Tickets for the 2018 Formula 1 Azerbaijan Grand Prix went on sale November 6, and are available online.