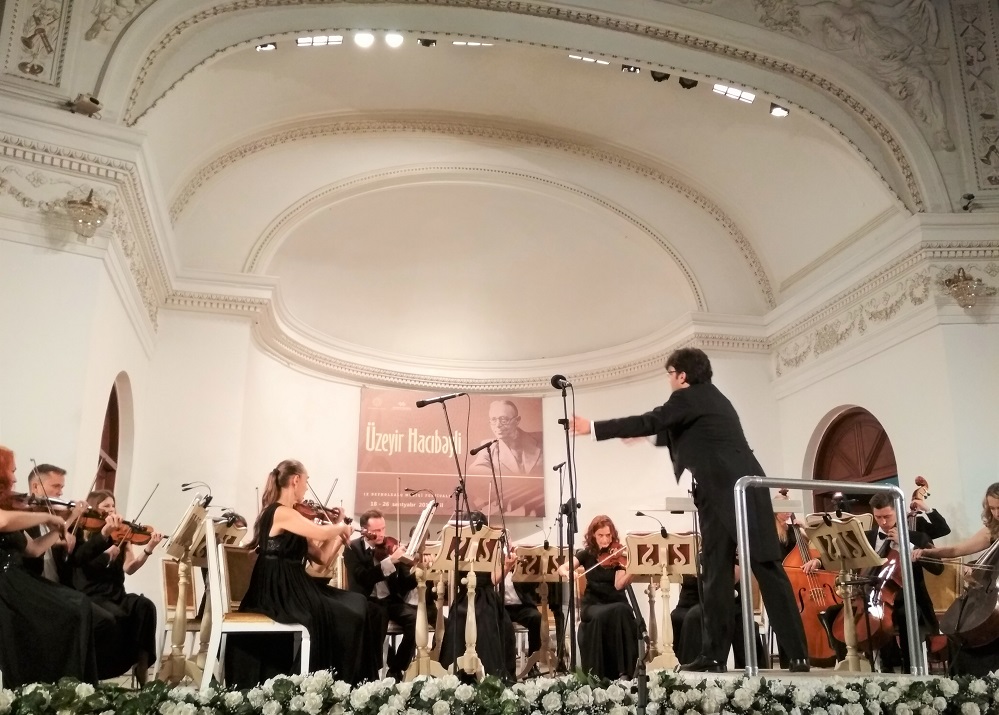 The event opens today with a performance by the Uzeyir Hajibeyov State Symphony Orchestra and State Choir Cappella playing pieces from his opera “Leyli and Majnun,” which premiered in 1908. / Wikimedia Commons

Every year on September 18, Azerbaijanis celebrate National Music Day to commemorate the birthday of Uzeyir Hajibeyov – the father of Azerbaijani classical music and the composer of the first opera in the Muslim world.

To mark this year’s occasion, a nine-day musical extravaganza known as the Uzeyir Hajibeyov International Music Festival is taking place in Baku. The event opens today with a performance by the Uzeyir Hajibeyov State Symphony Orchestra and State Choir Cappella playing pieces from his opera “Leyli and Majnun,” which premiered in 1908.

The Uzeyir Hajibeyov International Music Festival was first held in 2009. Now in its tenth edition, the festival, which runs through September 26, is bringing together famous classical musicians from across Azerbaijan, Russia, Turkey, Italy, Slovakia and the United States. Like previous years’ events, concerts are organized by the Heydar Aliyev Foundation and the Ministry of Culture. Nearly 30 events are scheduled to take place in multiple cities across the country, with the main events held in the capital.

Hajibeyov is recognized as forming the basis for modern Azerbaijani music. The iconic Azerbaijani composer, Hajibeyov has also been credited with creating a synthesis of what has become a source of national pride and ethnic identity after he mixed classical music with mugham, which is a unique set of melodies that have influenced music throughout the Caspian and Middle East regions, well beyond Azerbaijan’s borders. Hajibeyov is also credited with inventing Azerbaijani musical comedy. His most famous work of that sort is “Arshin Mal Alan,” a work about a textile merchant who is in search of a wife. Its performance was staged in 120 theaters including those in Moscow, Istanbul, New York, Paris and London.

Hajibeyov’s works provided a springboard for musicians of the 1920s, a time when Azerbaijan became something of a hub for jazz musicians and around the same time the genre was budding in the U.S. Composers Niyazi and Tofig Guliyev, the pioneers of Azerbaijani jazz, created a jazz orchestra in the 1930s. The 1930s – a time during which Azerbaijan was part of the Soviet Union – saw its first symphony orchestra, choir, musical orchestra of folk instruments, dance ensemble and the Azerbaijan State Philharmonic Hall spring up. Guliyev led jazz musicians during their first concert in the Baku Philharmonic Hall.

Following World War II, known as the Great Patriotic War in the Soviet Union, Azerbaijani national music boomed – and Gara Garayev, whose ballet called “The Seven Beauties” led it. But a real breakthrough came when Vagif Mustafazade created jazz-mugham, a synthesis of the two musical forms.

The author of numerous fugues, preludes, ballads and scherzos, Mustafazade was a constant participant in jazz festivals, and was ranked first at the 8th International Monte Carlo Jazz Competition, held in Monaco in 1979. His music won the top award for a performance of “Waiting for Aziza,” a track dedicated to his daughter and fellow jazz artist and composer, Aziza Mustafa Zadeh, who became known as The Princess of Jazz.

The Uzeyir Hajibeyov International Music Festival is a high-profile musical event for Azerbaijan, but it is one in a series of major festivals held throughout the country over the course of a year. In an attempt to strengthen country’s musical traditions, Azerbaijan also hosts the annual Gabala International Music Festival and Baku Jazz Festival – both considered some of the biggest festivals in the South Caucasus region.

This year’s Jazz Festival is scheduled for October 14–28. Musicians from Israel, Russia, Estonia, France, Sweden, Turkey, Hungary, Belgium, Norway, the U.S. and Brazil are expected to converge on the city for what is another highly anticipated Azerbaijani musical event.