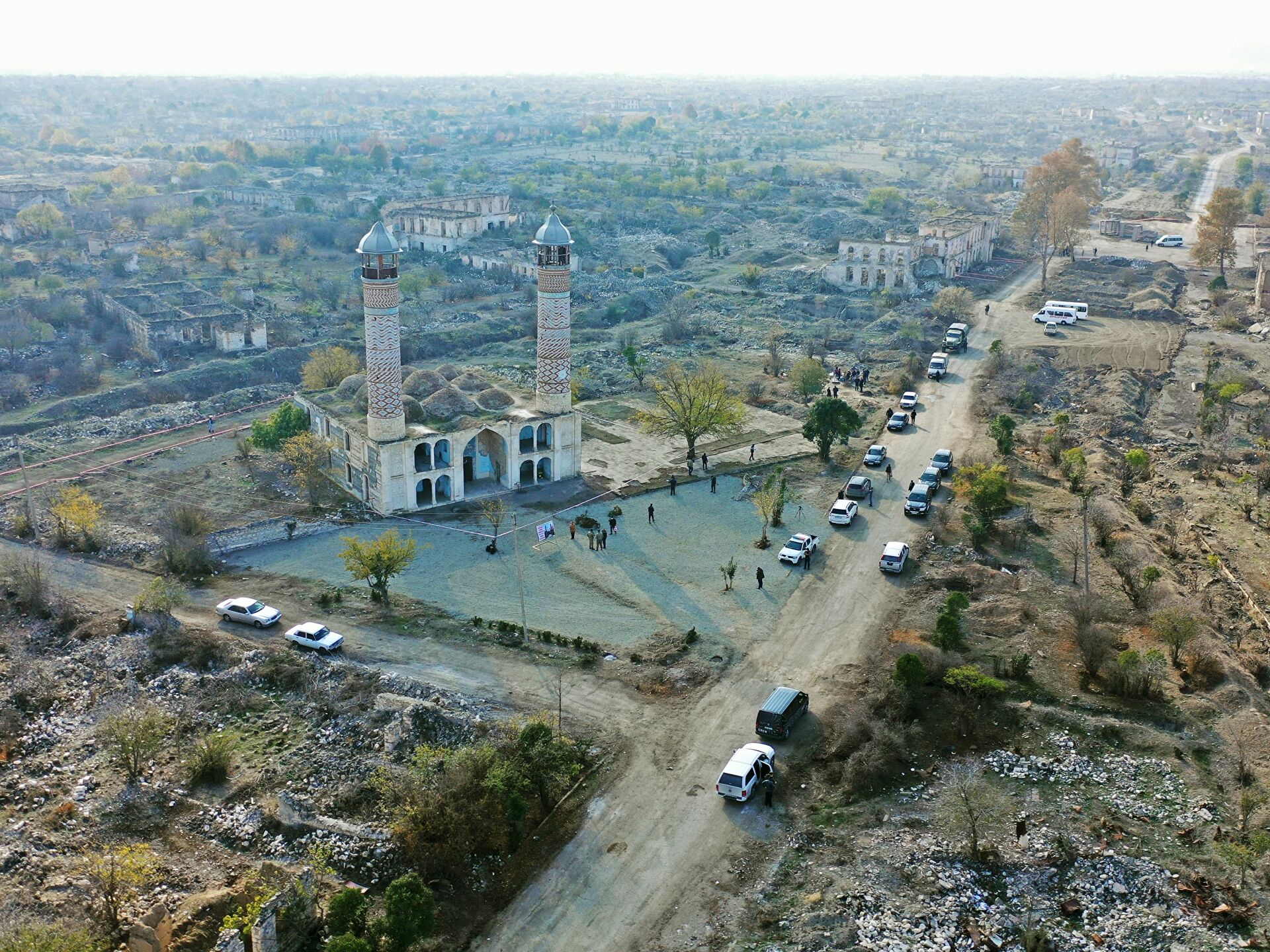 The only building that partially survived the Armenian vandalism in Aghdam is the Juma Mosque, which has been used as a landmark by the Armenian forces / Alexei Kudenko / Sputnik

The Azerbaijani government is sparing no effort to develop and integrate the liberated territories in the Karabakh region into the country’s economy with multi-million-dollar investments made particularly in the non-oil industry sectors.

Member of the Azerbaijani Parliament, Vugar Bayramli, said Aghdam will become the industrial center of the region thanks to the ongoing reconstruction and restoration works. The Aghdam Industrial Park will be the backbone of the district’s and the entire region's industrial revival, according to Bayramov.

“It is planned to invest 110 million manats ($64.7 million) in the new industrial park in Aghdam, which will involve 333 jobs and 33 entrepreneurs in the process,” he said. “Along with the local investment, foreign investment is also expected to be attracted to Aghdam. From this point of view, it is considered to produce both agricultural products and industrial products, some of which will be marketed domestically and some exported to overseas.”

Bayramli is convinced that part of the goods produced in Aghdam would reach foreign markets through the North-South International Transport Corridor, adding value to the non-oil industry of Azerbaijan.

The Aghdam Industry Park is supposed to turn Aghdam into a super modern and sophisticated industrial center of the entire Karabakh region. President Ilham Aliyev laid the foundation for the park in May 2021. The construction of the industry park comes in line with the government’s strategy to transform Aghdam into one of four major regional centers in Azerbaijan’s liberated Karabakh (Garabagh) and East Zangazur regions. While Aghdam will be positioned as an industrial center, Kalbajar will become a mining and tourism hub. At the same time, the government plans to turn Shusha into a cultural and touristic center, and Jabrayil will become a logistics and trade hub.

Aghdam is one of the districts liberated from the Armenian occupation as a result of the 44-day war last year. The district suffered Armenian vandalism to the largest extent during 27 years of occupation since 1993. Aghdam has been referred to as a “ghost town” and “Hiroshima of Caucasus” due to the scale of destruction caused by Armenians. International analysts labeled Aghdam as the planet’s “largest home depot” as Armenians plundered and ransacked the district’s properties to use as building supplies.

Currently, Aghdam is being revived as part of the post-war reconstruction and restoration campaign rolled out by the government. In May, President Aliyev broke ground to construct a new highway and first “smart” residential building in Aghdam. A total of 1,750 houses and 23,000 apartments will reportedly be built in the district. Seventy percent of the city’s population will live in apartment buildings and the rest 30 percent in private houses.

The government is going to hold a presentation of the future projects developed for the restoration of the liberated territories in South Korea. The Korean entrepreneurs are reportedly interested in investing in green energy zones. In addition, entrepreneurs from Austria, who want to build a hydropower plant in liberated lands, will travel to the Karabakh region next year. Azerbaijani authorities aim to help both countries explore investment opportunities and encourage them to join the reconstruction projects. Turkish, Italian, Israeli, British, and Japanese companies have already secured participation in those projects.

An international airport in the district of Fuzuli, a 100-kilometer highway leading from Fuzuli to the city of Shusha, two hotels, multiple power generation stations was built in the liberated lands so far. Seven other highways, a smart city and a smart village, two industrial parks, green energy zones, residential buildings, and many more are currently being constructed. The government of Azerbaijan plans to start returning IDPs to their native lands in early 2022.

Around 800,000 Azerbaijanis have been forcibly expelled from the Karabakh region in a brutal ethnic cleansing policy conducted by Armenia during the First Karabakh War in 1991-1994. In addition, Armenian authorities have forcefully displaced 350,000 Azerbaijanis from their ancestral lands in the territory of modern-day Armenia in 1988-1992, turning more than one million Azerbaijanis into IDPs and refugees.