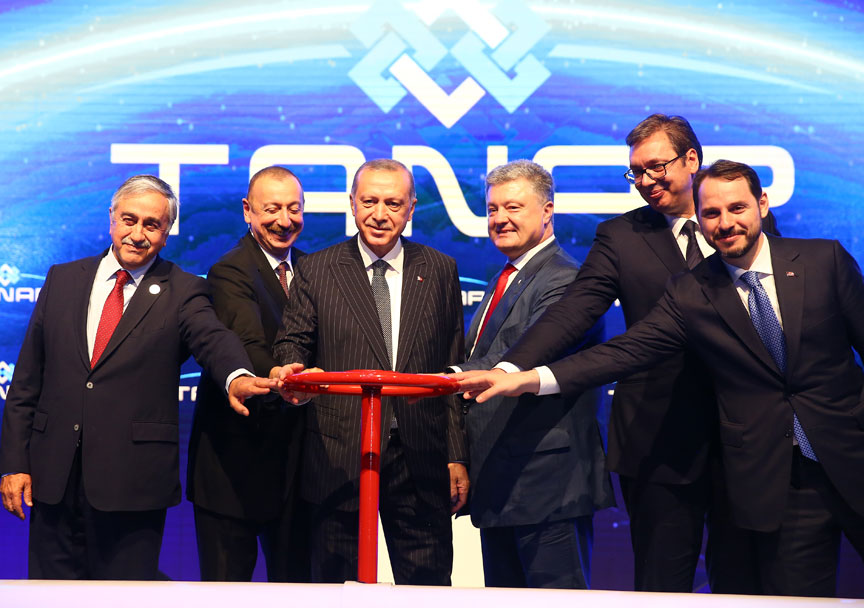 The Trans Anatolian Pipeline (TANAP), the largest segment of the Southern Gas Corridor energy project, came online on Tuesday in Turkey’s central-western province of Eskishehir, marking the opening of a long-anticipated project that will initially supply Europe with 10 billion cubic meters (bcm) of natural gas and Turkey with another 6 bcm.

"Today, we are taking a historic step for the region and for our country,” Turkish President Recep Tayyip Erdogan said in his speech at the opening ceremony on Tuesday, according to Haberturk.

“We are opening the Trans Anatolian Pipeline, which is the backbone of the Southern Gas Corridor, and which we define as the “Silk Road” of energy,” Erdogan added. “With TANAP, Caspian gas reached Europe for the first time.”

TANAP is the longest gas pipeline in Turkey, the Middle East and Europe.

“TANAP owns a route that passes through 20 provinces, 67 districts [all within Turkey] and the Dardanelles Strait,” Erdogan said, explaining how the gas moved throughout the corridor will be split between European and Turkish markets.

BOTAŞ Petroleum Pipeline Corporation, the state-run energy pipeline and trading company in Turkey, said it will receive two bcm of gas via TANAP, which begins where the South Caucasus Pipeline ends, in far eastern Turkey and near the border with Georgia. That pipeline is ultimately responsible for moving what is gas trapped in the Shah Deniz gas field beneath the Caspian Sea located off Azerbaijan’s coast, and head westward to Europe and Turkey.

The complete Southern Gas Corridor – comprised of the South Caucasus Pipeline in the east, TANAP in the middle, and the Trans Adriatic Pipeline in the west – will not be fully online until sometime in 2020. But TANAP will kick off its operations and first commercial deliveries of gas from Azerbaijan on June 30, according to Reuters.

Measuring 1,850 km and the largest of the 3,500 km, three-segmented Southern Gas Corridor, TANAP cuts through the entire territory of Turkey horizontally from its eastern border with Georgia in the village of Türkgözü and ends at the Turkish-Greek border in the İpsala district. There the Trans Adriatic Pipeline begins, which traverses Greece and Albania, dips underneath the Adriatic Sea, all before plugging into southern Italy near the town of San Foca.

The $8.6 billion TANAP pipeline consists of seven compressor stations, four measuring stations, 11 pigging stations, 49 block valve stations and two off-take stations. To connect to the international natural gas grid, TANAP will have two exit points: one in Eskishehir and the other in Turkey’s Thrace region in southeastern Europe. Around 19 km of the pipeline runs underneath the Sea of Marmara.

TANAP became a reality in December 2011, when Turkey and Azerbaijan signed a preliminary economic deal that lead to an agreement by June of the following year. By January 2018, the pipeline received its first test batch of Caspian gas.

“TANAP is the next victory of Turkey and Azerbaijan,” Azerbaijan’s President Ilham Aliyev said in his speech at the opening ceremony on June 12, according to his official website.

“Today, we are writing the energy history of the 21st century. This is the history of cooperation, history of stability. Our energy projects bring stability to the region,” President Aliyev’s website reads.

“TANAP unites seven countries [and] many companies. TANAP, an integral part of the Southern Gas Corridor, is an indispensable infrastructure project to address energy security issues today and in the future.”

President Aliyev inaugurated the South Caucasus Pipeline in Baku on May 29. Shah Deniz is the sole supplier thus far to the pipeline, although eastern Caspian countries such as Kazakhstan and Turkmenistan have expressed interest in exporting some of their gas through the larger corridor.

BP identifies the Shah Deniz, however, as its second biggest energy deposit discovery after the Prudhoe Bay oil field in Alaska. Located in the deep-water shelf of the Caspian, the field has estimated reserves of about 1.2 trillion cubic meters (42.38 trillion cubic feet) of natural gas and 2.2 billion barrels of condensate.

“We will all benefit from this bridge between the Caspian region and the EU market,” Vice-President of the European Commission for Energy Union Maroš Šefčovič told Trend on Tuesday at the opening of TANAP.

“It is in our common interest to succeed [in the implementation of this project]. The Southern Gas Corridor, which will contribute to the diversification of suppliers and routes of energy supplies to Europe, is a strategically important project for the energy security of the EU.”