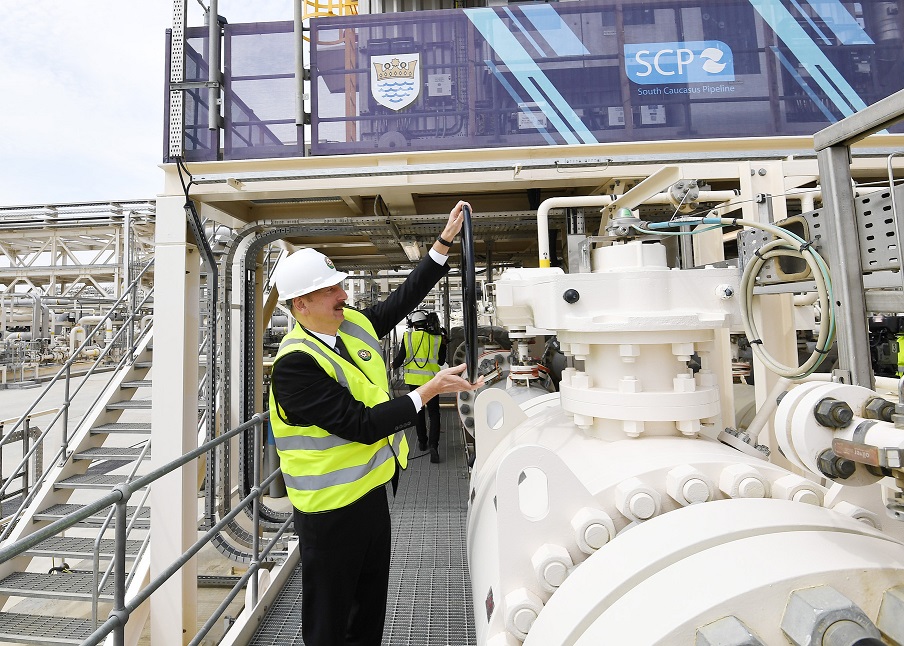 Azerbaijan President Ilham Aliyev opened a valve of the South Caucasus Pipeline, the first segment of the Southern Gas Corridor, to mark the opening of mega pipeline, Baku, Azerbaijan, May 29, 2018 / President.Az

The Southern Gas Corridor mega-pipeline that bridges Europe with the Caspian Sea came online on May 29, when Azerbaijan’s President Ilham Aliyev opened a valve at the Sangachal terminal near Baku, allowing gas to start flowing westward.

“Today, while marking the inauguration of the Southern Gas Corridor on this historic day, we see how timely and wise that step was,” President Aliyev said, according to President.Az, as he turned the wheel that allowed gas to travel into the South Caucasus Pipeline, the first of three segments to the corridor.

“Of course, we all knew very well that gas pipelines were required to transport large volumes of Azerbaijani gas to world markets. Thus, specific work started on the creation of the Southern Gas Corridor,” President Aliyev said, mentioning that in 2012 Azerbaijan and Turkey signed an agreement for the construction of the second segment, known as the Trans-Anatolian Pipeline, or TANAP for short, according to President.Az.

“Thus, a powerful impetus was given to the implementation of the Southern Gas Corridor,” President Aliyev said.

The opening of the massive energy route that stretched 3,500 km and traverses six countries comes after an agreement was signed in 2013 between nine European companies and Azerbaijan’s state-run energy conglomerate SOCAR. That year the government of Azerbaijan authorized the exploration and development of the Shah Deniz-2 gas field beneath the Caspian Sea, currently the sole supplier of natural gas to the SGC pipeline.

Shah Deniz is one of the world’s largest gas condensate fields. Located in the deep water shelf of the Caspian, the field has estimated reserves of about 1.2 trillion cubic meters (42.38 trillion cubic feet) of natural gas, and 2.2 billion barrels of condensate, according to data provided by BP.

The Southern Gas Corridor will deliver that gas to Europe after passing through three pipelines: the South Caucasus Pipeline, TANAP, and the Trans Adriatic Pipeline, which ends in southern Italy and allows for 10 billion cubic meters (bcm) to enter Europe’s energy grid, after delivering another six bcm to Turkey.

The South Caucasus Pipeline at Sangachal terminal near Baku is where the route starts absorbing Caspian gas and cuts its way through Azerbaijan to join TANAP on the Georgian-Turkish border in the village of Türkgözü. TANAP measures 1,850 kilometers, comprising the largest segment of the corridor. The route’s infrastructure includes seven compressor stations, four measuring stations, 11 pigging stations, 49 block valve stations and two off-take stations. A 19 km-long part of the route runs submerged in the Marmara Sea.

As of March 2018, around 93 percent of TANAP was completed. Earlier this month top officials revealed that the presidents of Azerbaijan and Turkey have agreed to launch TANAP on June 12, roughly two weeks before presidential elections in Turkey.

The corridor’s final segment, the Trans Adriatic Pipeline, will not go online until 2020. What starts in İpsala village at the Turkish-Greek border runs throughout Greece and Albania, passes underneath the Adriatic Sea, to reach its end in southern Italy, where gas will enter Europe’s energy grid and further reach markets in Austria, Switzerland, Germany, the Netherlands, Belgium and the U.K. Bulgaria and the Balkan countries may, in the future receive gas via the corridor. As of February, two-thirds of the Trans Adriatic Pipeline has been completed.

The mega-pipeline serves to alleviate the energy dependence of Turkey and the European Union on other countries. The corridor gives the EU a diversified market of energy resources, while making its relationship with Azerbaijan critical to its long-term energy needs. European leaders want to secure additional energy sources as quickly as possible amidst Europe’s growing reliance on foreign energy reserves. Russia, Norway, and Algeria are today the major natural gas sellers to Europe, and Azerbaijan is expected to be the next supplier, thanks to the corridor. Europe will reportedly be the world’s largest gas market in 2035.

As for Turkey, which lies closer to the Caspian country, its energy market depends almost fully on foreign resources.

Tuesday’s ceremony at the Sangachal terminal was attended by Deputy Assistant Secretary of State for Energy Diplomacy Ms. Sandra Oudkirk; the U.K.’s trade envoy to Azerbaijan, Baroness Emma Nicholson; and high-profile officials from OPEC and BP. Officials from Turkey and the U.K. read congratulatory letters sent by Turkish President Recep Tayyip Erdogan and the U.K. Prime Minister Theresa May.

Ms. Oudkirk said the corridor provides new opportunities for more extensive economic integration of the countries of the Caspian region, and that Washington plans to continue cooperating with all participant countries.

"The President of the United States Donald Trump has repeatedly stated his support for this project,” Oudkirk said at the ceremony. “In his recent letter addressed to the President of Azerbaijan in honor of the 100th anniversary of the Azerbaijani Democratic Republic, he also stressed that the Southern Gas Corridor is an incredible achievement that will ensure the energy security of Europe."