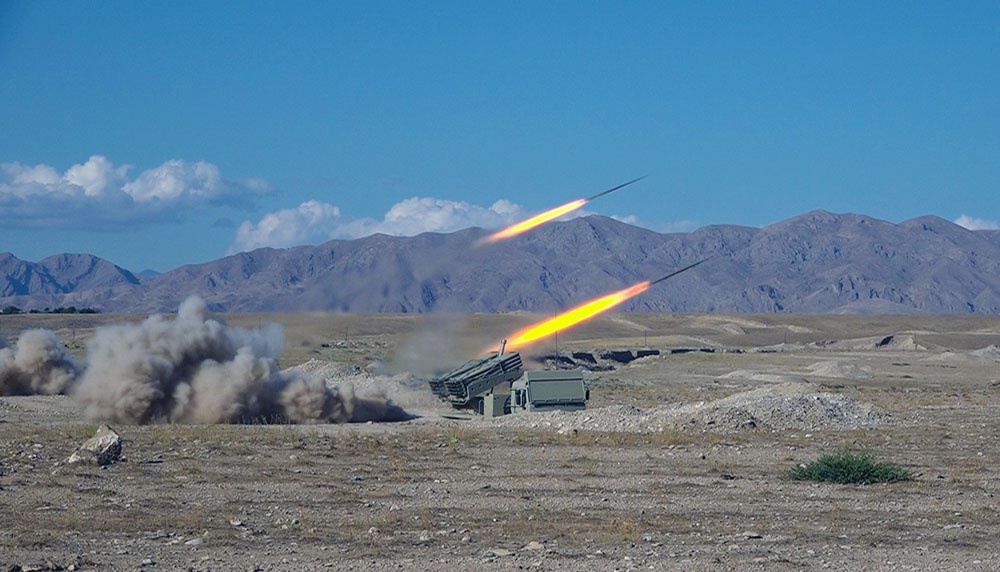 A photo from the live-fire drills of the Azerbaijani Armed Forces' artillery units, July 2, 2020 / Ministry of Defense of Azerbaijan

Tensions between Armenia and Azerbaijan have once again led to short, but deadly skirmishes after Armenian armed forces opened fire on Azerbaijani positions.

The Defense Ministry of Azerbaijan said in a statement issued on Sunday that starting from noon on July 12, the Armenian armed forces violated the ceasefire in Azerbaijan's western Tovuz region on the border with Armenia by artillery fire.

"The armed forces of Armenia attempted to attack using artillery to capture our positions on the Tovuz direction of the Azerbaijani-Armenian state border. As a result of the adequate steps undertaken by our units, the enemy was defeated and driven back suffering losses," read a statement published on the ministry's website.

Four Azerbaijani servicemen were killed and four others were injured following the incident. Azerbaijani forces destroyed a strong point, artillery installations, vehicles and manpower of the Armenian army with the use of artillery fire, mortars and tanks.

Although Armenian officials said only two policemen were injured during the skirmishes, a number of Armenian media and users of social networks reported that the country's army lost 31 soldiers, including 7 officers, in the clashes with the Azerbaijani forces.

An aide to the president of Azerbaijan, Head of the Foreign Policy Affairs Department of the Presidential Administration Hikmet Hajiyev described Armenia's attacking on the positions of Azerbaijani armed forces as an act of aggression and provocation from Yerevan.

"The provocation by Armenia, perpetrated along the border, is yet another evidence that the official Yerevan is disinterested in the negotiated settlement of the Armenia-Azerbaijan conflict," Azertag quoted Hajiyev as saying.

Meanwhile, the Foreign Ministry of Azerbaijan stated that the recent provocation by Armenia downplays the core principles of the negotiations mediated by the OSCE Minsk Group co-chairs on the settlement of the Armenia-Azerbaijan Nagorno-Karabakh conflict.

"Armenia bears full responsibility for such provocative actions that serve to aggravate the situation," the ministry said in a statement on Sunday.

Armenia and Azerbaijan have been at odds since the late 1980s with the dramatic rise in anti-Azerbaijan sentiments in Armenia, as well as Armenia's claims to Azerbaijan's historic Nagorno-Karabakh region, where partial Armenian population was living side by side indigenous Azerbaijanis. These sentiments transitioned into a full-blown military campaign in 1991, when Armenia launched an attack on Azerbaijani lands.

A four-year bloody war between the two neighbor countries ended with a ceasefire in 1994, which saw Armenia occupying 20 percent of Azerbaijan's sovereign territory, including the entire Nagorno-Karabakh region and seven surrounding districts. Over 30,000 ethnic Azerbaijanis fell victim in the war, while one million were forced to leave their homes.

In the early 1990s, the Organization for Security and Cooperation in Europe established the Minsk Group, a special mediation structure co-chaired by diplomats from Russia, the U.S. and France and tasked to help Armenia and Azerbaijan find a political end to the conflict. The Group's activities failed to produce a lasting solution so far due to what authorities in Baku explain as the inaction of the co-chairs on Armenia's illegal occupation of Azerbaijani lands.

Despite the ceasefire agreement, Armenian forces launch regular armed attacks on Azerbaijani positions, causing both civilian and servicemen deaths. According to data compiled by the Military Prosecutor's Office, 856 Azerbaijani servicemen have been killed and injured over 26 years since the ceasefire came into force in 1994.

Amid the clashes between Armenian and Azerbaijani forces on Sunday, Prime Minister Nikol Pashinyan of Armenia posted on his personal Facebook page a document titled "The national goals of the Armenian people," 1news.az reported. The seven so-called targets included also the international recognition of the right to self-determination of the illegal separatist regime in the occupied Nagorno-Karabakh region of Azerbaijan, which is an open violation of Yerevan's obligations under the international law and as part of the negotiation process.