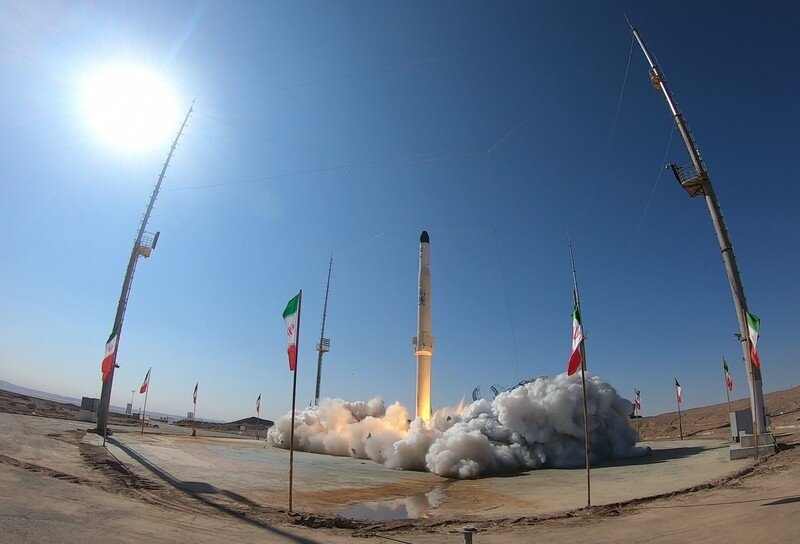 On February 1, Iran launched the Zol-Jannah three-staged satellite carrier, which is equipped with a solid-fuel engine. The satellite carrier is capable of carrying satellites weighing up to 220 kilograms in a 500-kilometer orbit. / MEHR News Agency

The United States has expressed concerns that Iran could advance its ballistic missile development as it launches satellite-carrying rockets.

He added that "SLVs pose a significant proliferation concern due to the fact that SLVs incorporate technologies identical to, and interchangeable with, those used in ballistic missiles, including longer-range systems."

On February 1, Iran launched the Zol-Jannah three-staged satellite carrier, which is equipped with a solid-fuel engine. The satellite carrier is capable of carrying satellites weighing up to 220 kilograms in a 500-kilometer orbit, according to the spokesman of the space division of the Iranian Defense Ministry, Seyyed Ahmad Hosseini.

“The satellite carrier is equipped with the most powerful solid-fuel engine in the country with a thrust of more than 750 tons which is one of the most important achievements of this space experiment” he added.

On the occasion of the launch of a research satellite, Major General Seyed Abdolrahim Mousavi, Commander-in-Chief of Iran’s Army, congratulated the country’s Defense Minister Amir Hatami, saying that “undoubtedly, the diligence, self-sacrifice and revolutionary and jihadist spirit of scientists and young people of Iran specialized in the field of defense of the country, paved the way for the progress and conquest of the peaks of power and today we are witnessing it. Iran is at the forefront of defense achievements, and stands at the height of dignity and authority.”

The Iranian officials have reiterated that the country’s space program aims to boost business and does not violate any international agreements. Tehran has been domestically producing new missiles, despite the US warnings about the Islamic Republic’s ballistic arsenal. The US has demanded that the Islamic Republic halt its missile program, amid rising tensions between the two countries.

Tehran is moving “closer and closer to having enough fissile material” for a nuclear weapon, Sullivan said at an event at the US Institute of Peace, on January 29. Returning to the deal intended to limit Iran’s nuclear program is a “critical early priority” for the new administration, he added.

In April 2020, the Islamic Revolutionary Guards Corps (IRGC) launched Iran's first military satellite, dubbed Noor-1, by the domestically-built launcher Qassed (translated as "messenger" in Persian) and placed it into orbit at an altitude of 425 km.

Following the satellite's launch, the then US Secretary of State Mike Pompeo said Iran should be held accountable for the launch of a military satellite, referring to UN Security Council resolution 2231.

The United Nations' resolution adopted in 2015 urges Iran to refrain from working on ballistic missiles designed to be capable of delivering nuclear weapons for up to eight years after the JCPOA, an agreement that was signed between Tehran and six world powers to limit its nuclear program.