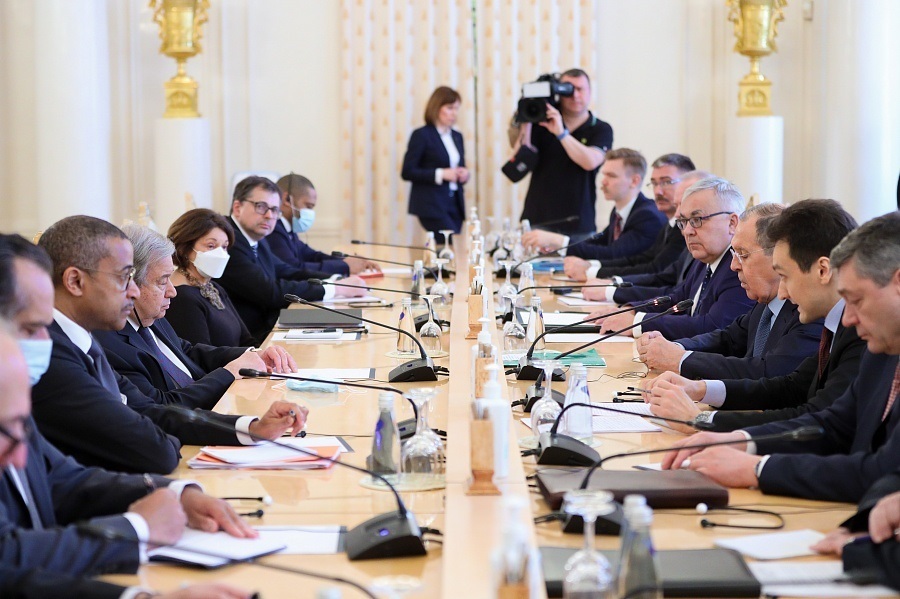 Guterres’ visit came at the time when Russian forces launched fresh airstrikes on a Mariupol steel plant, where nearly 2,000 Ukrainian fighters and around 1,000 civilians are holed up. / Foreign Ministry of Russia

UN Secretary-General António Guterres has tabled a proposal to establish a humanitarian contact group comprising the UN, Russia, and Ukraine to help save lives and safely evacuate people in Ukraine.

Speaking at a joint press conference after his talks with Russian Foreign Minister Sergei Lavrov on Tuesday, the UN chief voiced concerns over the repeated reports about the violations of international humanitarian law and war crimes in Ukraine.

“We urgently need humanitarian corridors that are truly safe and effective and that are respected by all to evacuate civilians and deliver much-needed assistance,” the UN chief said in Moscow after what he described as “frank discussions” with Lavrov.

“To that end, I have proposed the establishment of a Humanitarian Contact Group, bringing together the Russian Federation, Ukraine and the United Nations, to look for opportunities for the opening of safe corridors, with local cessations of hostilities, and to guarantee that they are actually effective,” Guterres said.

Guterres further said that the UN stood ready to mobilize all of its resources to help civilians in besieged Mariupol, a port city on the Sea of Azov that had withstood nearly two months of Russian bombardments.

“We recognize that we face a crisis within a crisis in Mariupol. Thousands of civilians are in dire need of life-saving humanitarian assistance, and many, of evacuation,” Guterres said.

He also proposed working with the Red Cross to enable people holed up inside the Azovstal steel plant in Mariupol to leave.

Guterres’ visit to Russia came amid fresh airstrikes launched by Russian forces on a Mariupol steel plant, where nearly 2,000 Ukrainian fighters and around 1,000 civilians are holed up. The Azovstal iron and steelworks is considered the last Ukrainian stronghold in the devastated city. About 100,000 civilians are reportedly trapped in the city without much food or aid.

On Monday, Ukrainian Deputy Prime Minister Iryna Vereshchuk reported that Kyiv appealed for the United Nations “to be the initiator and guarantor of the humanitarian corridor from Azovstal for civilians.”

The Soviet-era Azovstal plant in the southeast of Mariupol is a major industrial complex with a labyrinth of tunnels and bunkers spreading out across about 11 square kilometers (4 square miles). The plant shelters thousands of Ukrainian troops and civilians, including women and children.

Although Russia is still blocking Ukrainian forces at the Azovstal steel plant in Mariupol, the Kremlin claimed victory in the long-besieged southeastern Ukrainian city. President Putin said last week that it was unnecessary to storm the plant, calling instead for Russian troops to blockade the area “so that a fly can’t get through.”

Control of Mariupol plays a strategic role for the Kremlin since the port city and the separatist-controlled Donbas region would form a land bridge to the Crimea peninsula annexed by Russia in 2014.