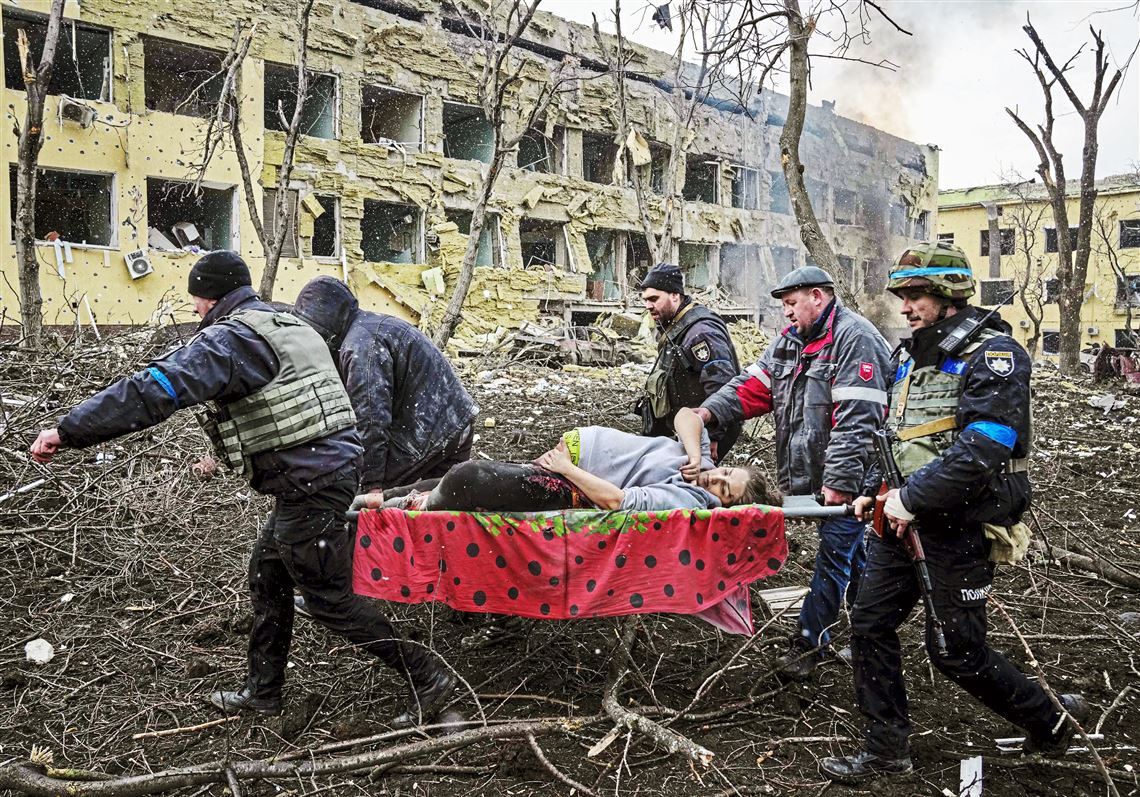 Three people, including one child, were killed, and 17 people were injured in Wednesday's attack in Mariupol, the city council said.

Ukrainian officials have accused Russian air forces of bombing a children’s hospital and maternity ward in the besieged southeastern coastal city of Mariupol, as the war in Ukraine entered its third week on Thursday.

On Wednesday, the 600-bed complex in Mariupol was hit by a series of blasts that blew out windows and ripped away much of the front of one building, leaving women and children under rubble.

Three people, including one child, were killed, and 17 people were injured in Wednesday's attack in Mariupol, the city council said.

Footage from the scene showed several injured civilians, including a bloodied pregnant woman being carried away on a stretcher.

Pavlo Kyrylenko, who heads the Donetsk regional administration which includes the port city of Mariupol, accused Russian forces of deliberately targeting the maternity hospital, which has a pediatric unit, claiming that it was “literally destroyed.”

“How much longer will the world be an accomplice ignoring terror? Close the sky right now! Stop the killings! You have power but you seem to be losing humanity,” he wrote in a clear rebuke to Western allies’ refusal to establish a no-fly zone over the area.

The Kremlin has insisted the children's and maternity hospital in Mariupol – shelled during a ceasefire – was seized by Ukrainian troops. At a press conference after talks with his Ukrainian counterpart Dmytro Kuleba, Russian Foreign Minister Sergey Lavrov said that Russia had bombed the hospital because it was being used by Ukrainian militants.

“At a meeting of the UN Security Council, facts were presented by our delegation about that this maternity hospital was seized long ago by the Azov Battalion and other radicals,” RIA Novosti quoted Lavrov as saying on Thursday. “All the women in labor, all the nurses, and all the attendants were expelled.”

The city, which is home to roughly 430,000 people, has been surrounded by Russian forces for more than a week and has suffered a humanitarian crisis, as attempts to deliver water, medicines and fuel have been thwarted.

Attempted evacuations of civilians have failed, as Ukraine and Russia trade accusations of ceasefire violations.

The city, which is strategically located along the Sea of Azov in southeastern Ukraine, has been under “continuous Russian shelling,” said Mariupol’s Deputy Mayor Sergiy Orlov.

At least 1,170 people have been killed in Mariupol, 47 of whom were buried in a mass grave, Orlov told CNN, adding that “it’s pure genocide.”

On February 21, Russian President Vladimir Putin recognized the so-called Donetsk and Lugansk People’s Republics as independent entities. He signed friendship, cooperation, and mutual assistance agreements with the two separatist territories. On February 24, Russia launched an all-out offensive in Ukraine, claiming that the assault was aimed at protecting the people of two self-proclaimed separatist-controlled regions of Ukraine allegedly being attacked by the Ukrainian military. The Kremlin explained that the decision was made after separatist leaders of the so-called republics asked Moscow for military support against Kyiv.

Around 2.5 million people have fled Ukraine since the start of Russia's invasion, according to the latest data compiled by the International Organization for Migration as of March 10.

Since the invasion began, thousands of Ukrainian civilians have been killed, while Russia has been plunged into isolation never before experienced by an economy of its size.