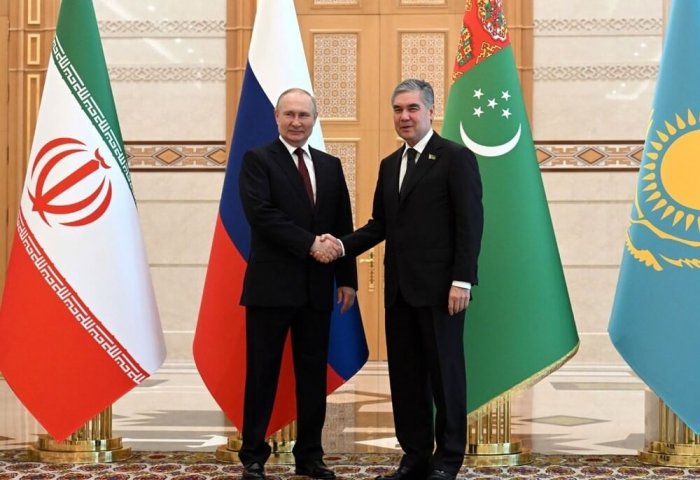 Russian President Vladimir Putin signed a decree on conferring the Order for Services to the Fatherland on Gurbanguly Berdimuhamedow. The decree states that Berdimuhamedow was awarded the order “for his great contribution to strengthening the strategic partnership between the Russian Federation and Turkmenistan”. / Orient.tm

"Establishing strong and long-term relations between our countries is a guarantee for the inviolability of the two peoples' aspiration to achieve progress and prosperity. At this moment, which is special for me, I think that it is necessary to note Russian President Vladimir Putin's outstanding contribution to strengthening interstate partnership," Berdimuhamedow who currently serves as the chairman of the Turkmen parliament's upper house, said in a phone conversation with his Russian counterpart, Valentina Matviyenko, on August 29, according to Turkmenistan Today.

The Turkmen and Russian officials also expressed their support towards "developing strategic cooperation," and confirmed that they were ready to develop relations between the countries' legislative bodies to facilitate communication to address a wide range of issues of mutual interest.

The two sides highlighted the importance of mutual understanding as a solid foundation upon which the countries can expand their scope of cooperation.

Earlier, President Putin signed a decree on conferring the Order for Services to the Fatherland on Gurbanguly Berdimuhamedow, who is President Serdar Berdimuhamedow's father, Khronika Turkmenistana reported on August 27.

The decree states that Berdimuhamedow was awarded the order “for his great contribution to strengthening the strategic partnership between the Russian Federation and Turkmenistan”.

The two sides discussed issues related to the purchase of Turkmen gas by the Russian holding under the existing contract and the expansion of cooperation in this area on a long-term basis.

Berdimuhamedow said that his country was "always open to proposals by its long-standing business partners" and ready to support new promising formats of cooperation, while Gazprom pledged to "continue to firmly follow" its commitments.

It should be noted that Turkmenistan and Russia signed 15 cooperation documents along with a declaration on expanding their strategic partnership on June 10 during Serdar Berdimuhamedow's official visit to Moscow.

These documents were agreements between the governments of Turkmenistan and Russia, which aim to prevent, detect and halt suspicious financial transactions in foreign economic activity. The Turkmen Central Bank and the Russian Central Bank also signed a memorandum of understanding on banking supervision. The two sides also signed a number of documents aimed at building bilateral partnerships in communications, transport transit and logistics sectors.