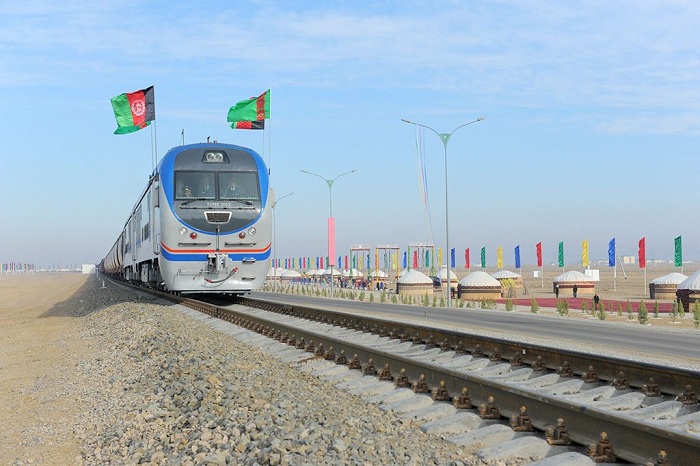 Presidents of Turkmenistan and Afghanistan launched a 30 km railway segment that links the Afghan border cities of Aqina and Andkhoy. The first train carrying oil products, mineral fertilizers, and crop products from Turkmenistan left Aqina on the same day.

Top government officials from Ashgabat and Kabul launched a series of infrastructure projects to link landlocked Afghanistan to distant markets.

As part of the video conference held on Thursday, Turkmenistan’s President Gurbanguly Berdimuhamedow and his Afghan counterpart Ashraf Ghani launched a new section of the Turkmenistan-Afghanistan-Tajikistan railway, which will help traders in Kabul and Kandahar market their products to customers as far away as China and other Pacific Rim countries.

“It is an immense honor that Afghanistan is renewing long-standing relations with Central Asian countries after more than 100 years of isolation,” President Ghani said in his video address. “Those who thought that building a network of the railway in Afghanistan is impossible, need to reconsider their perspective.”

The newly launched railway line is supposed to become a part of the 400-km trade and transportation corridor connecting Jaloliddini Balkhi district in Tajikistan, the cities of Sherkhan Bandar, Kunduz, Mazari Sharif, and Sheberghan in Afghanistan, and Turkmenistan’s Ymamnazar and Kerki (formerly known as Atamyrat). The railway line may be extended to the border with Kyrgyzstan, with further access to the states of the Asia-Pacific region.

According to the state-owned news outlet Turkmenistan Today, the construction of the railway on the Afghan territory is being carried out at the expense of Turkmenistan. Ashgabat also provided the human resources and technical equipment to see the project to completion.

Meanwhile, the other projects launched this week by the presidents of Turkmenistan and Afghanistan include a power line, which is a part of a project aimed to envisage power supplies from Turkmenistan to Afghanistan and Pakistan, and an optic cable line.

The 153 km power line will connect the city of Kerki in Turkmenistan with Sheberghan in Afghanistan, and supply power to Andkhoy and Mazar-e-Sharif in northern Afghanistan. The line is supposed to be extended by early 2022 to provide electricity to Puli Khumri, Kabul, and, eventually, Pakistan.

The optic cable line launched on Thursday will connect the Turkmen cities of Ymamnazar and Serhetabat to Aqina and Torghundi in Afghanistan. According to Turkmenistan Today, the line will help increase transit network traffic through Turkmenistan, ensure its transmission to Afghanistan, and further to Pakistan.

Officials in Turkmenistan have had an interest in helping rebuild war-torn Afghanistan after decades of conflict. The Turkmenistani government in Ashgabat is in favor of providing targeted international economic assistance to Afghanistan primarily in the form of infrastructure and energy projects.

Last year, officials from Turkmenistan and Afghanistan signed a memorandum of understanding to speed up the construction of a nearly 2,000-kilometer pipeline known as TAPI that would transport Turkmenistan’s natural gas to Pakistan and India through Afghanistan. The pipeline is expected to supply about 33 billion cubic meters (bcm) of gas per year from Turkmenistan’s giant Galkynysh gas field. Five bcm out of the entire volume will be absorbed by Afghanistan, while Pakistan and India will receive 14 bcm each.