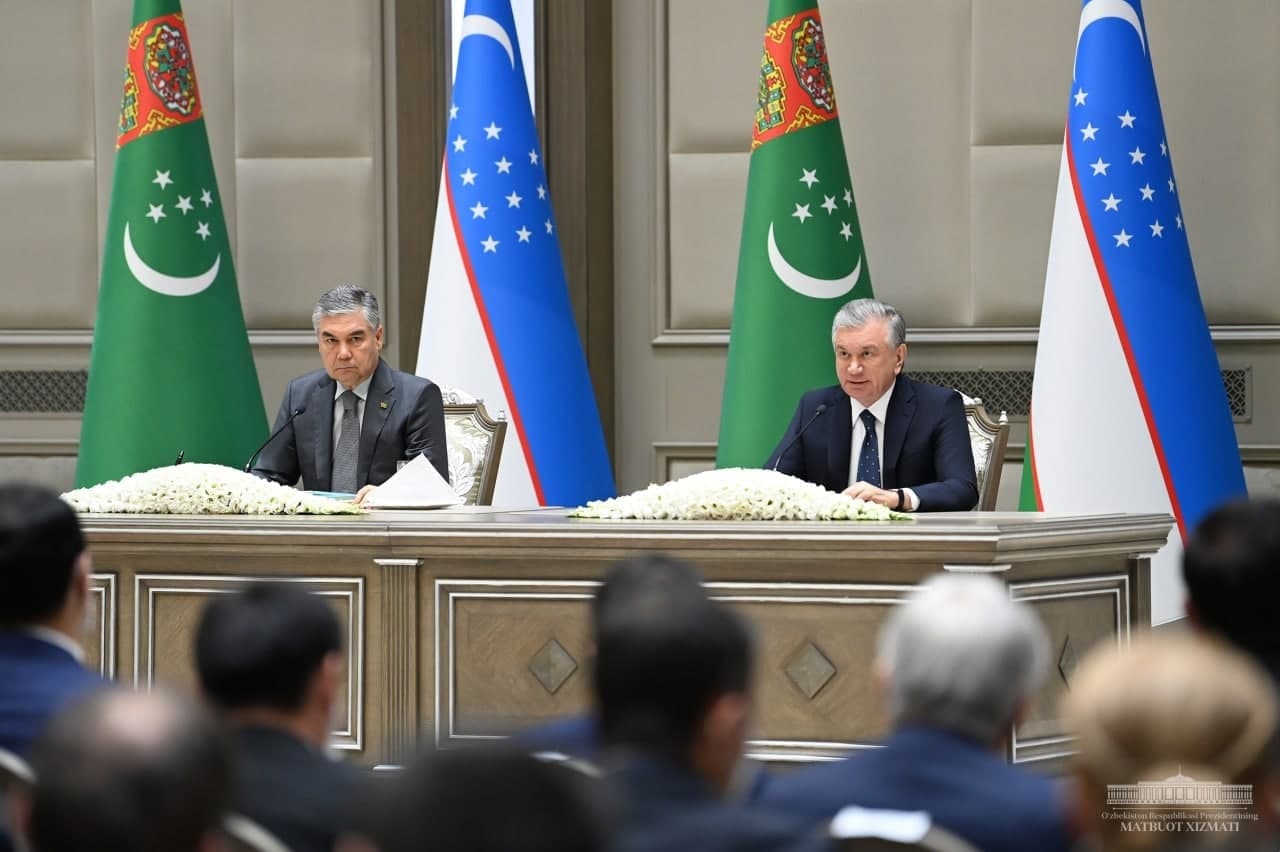 This picture shows Turkmenistan’s President Gurbanguly Berdimuhamedow and his Uzbek counterpart Shavkat Mirziyoyev at a press conference in the Uzbek capital Tashkent on October 5, 2021. / President.uz

The Turkmen and Uzbek presidents have discussed ways to expand strategic partnership and increase trade volume between the two Central Asian states.

“The main goal of the current official visit to Uzbekistan is to demonstrate firm support to the esteemed president and my friend, Shavkat Mirziyoyev, as well as the reforms carried out under his leadership in all spheres of the state, socio-political and socio-economic life of the country,” Turkmenistan’s President Gurbanguly Berdimuhamedow said at a press conference in Tashkent on October 5.

President Berdimuhamedow, who arrived in Uzbekistan on a two-day official visit, expressed satisfaction with “a trustful and constructive exchange of views on a wide range of bilateral cooperation issues.”

For his part, the Uzbek president said his country highly appreciated “the level of strategic partnership reached with Turkmenistan.”

“The results of today’s talks have once again clearly shown our sincere desire and unchangeable commitment to expand our cooperation. I would like to note that strengthening the good-neighborly relations with brotherly Turkmenistan is a priority in Uzbekistan’s foreign policy,” President Mirziyoyev said.

Mirziyoyev further added that he was pleased with “the positive trend in the development of Uzbek-Turkmen relations, especially in the trade and economic sphere.”

Meanwhile, the two countries signed a solid package of agreements following the results of the Uzbek-Turkmen Economic Forum held within the framework of President Berdimuhamedow’s visit. Uzbekistan’s president believes the agreement signed to set up a border trade zone and those inked to replace imports from third countries with competitive products produced in Uzbekistan and Turkmenistan would help increase mutual trade.

The trade between Uzbekistan and Turkmenistan has tripled in recent years despite the novel coronavirus pandemic, and increased by 25 percent since the beginning of 2021. The two countries are now planning to set up trans-border trade zones on the frontier between the two countries.

According to the Ministry of Investment and Foreign Trade of Uzbekistan, improving conditions for the development of bilateral trade, including through joint efforts to consistently remove existing tariff and non-tariff barriers, is expected to help increase Uzbek-Turkmen trade to $1 billion a year.

During the meeting, President Mirziyoyev also expressed his country and Turkmenistan’s readiness to contribute to peace in Afghanistan by implementing major transnational projects related to this country.

Turkmenistan shares an 800-kilometer border with Afghanistan, where the Taliban militant group seized power on August 15. The Taliban offensive began months ago and accelerated amid the withdrawal of US-led troops from Afghanistan that started on May 1.

Hundreds of Afghans, including soldiers and local police, have reportedly fled into neighboring Central Asian countries.