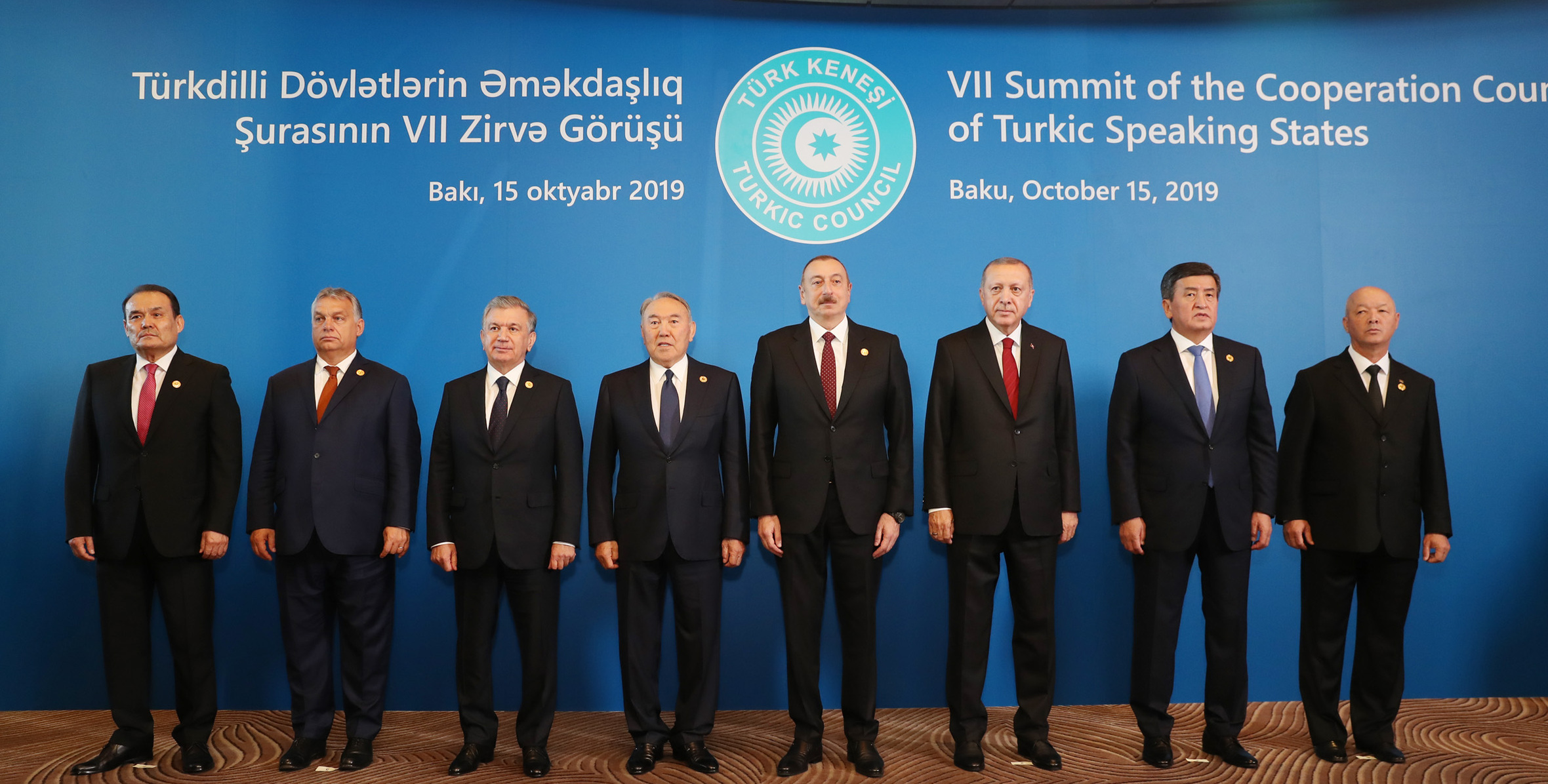 Participants of the 7th Summit of the Cooperation Council of Turkic-Speaking States pose for a photo before starting the meeting in Baku, October 15, 2019 / President.Az

Officials from Turkic-speaking nations have vowed to work together and advance their causes collectively, from foreign policy to transportation and technology.

Leaders and dignitaries from Azerbaijan, Turkey, Kazakhstan, Uzbekistan, Kyrgyzstan, Hungary and Turkmenistan met at the seventh summit of the Cooperation Council of Turkic-Speaking States, also known as the Turkic Council, in Baku on Tuesday.

“Azerbaijan, who took over the chairmanship of the Turkic Council from Kyrgyzstan, will continue its efforts to strengthen cooperation and friendship between our countries during this period,” Azerbaijan’s President Ilham Aliyev said in a speech, according to his official website.

“The common roots, history, culture, and national values that unite us are the basis for our mutually beneficial cooperation. Development of cooperation between the Turkic-speaking states is one of the priority directions of Azerbaijan's foreign policy.”

The Turkic Council was formed in 2009 and includes those countries in Europe and Asia that share a common ethnicity and closely-related languages, described as Turkic. Azerbaijan, Kazakhstan, Kyrgyzstan, Turkey and Uzbekistan – which was granted full membership this week – are all full members, while Turkmenistan and Hungary are observers that could be incorporated into the organization in the future.

President Aliyev said cooperation between the Turkic-speaking countries in the transportation sector is important, given the countries’ historical connection to the ancient Silk Road and the potential for becoming a reliable transit hub between Europe and Asia.

“Azerbaijan is an active participant in the East-West transport corridor. The Baku-Tbilisi-Kars railway, commissioned in October 2017, is our joint contribution to the restoration of the historic Silk Road,” President Aliyev said in his remarks.

The East-West Transport Corridor is an overland transportation corridor that stretches from China to Turkey, and ultimately to Europe.

Azerbaijan, Kazakhstan and Turkey are incorporated into the route, which starts in eastern China and extends westward, traversing Kazakhstan, the Caspian Sea, Azerbaijan, Georgia and Turkey. From there, it forks in two directions: Eastern Europe and to the Mediterranean Sea.

Azerbaijan is considered a key location along the route, due to its maritime Baku International Sea Trade Port and the Baku-Tbilisi-Kars railway, making transportation across what is considered the world’s largest lake possible.