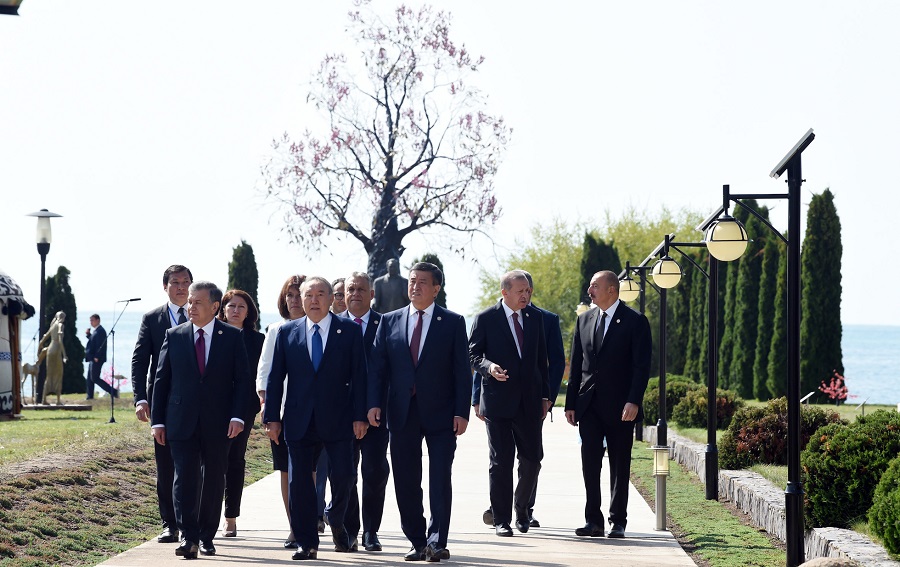 Leaders from Azerbaijan, Kazakhstan, Turkey, Kyrgyzstan, Uzbekistan, and Hungary gathered at the sixth Summit of the Turkic Council, held in Cholpon-Ata, Kyrgyzstan. / President.Az

Officials from the Turkic states have signaled that they are ready to support China’s mega-transportation and logistics project called the Belt and Road Initiative (BRI), which will connect east Asia and Africa together with Europe via a series of rail, road and sea routes.

BRI and related projects came into the spotlight this week, as leaders from Azerbaijan, Kazakhstan, Turkey, Kyrgyzstan, Uzbekistan, and Hungary gathered at the sixth Summit of the Turkic Council, held in Cholpon-Ata, Kyrgyzstan.

“We are ready to lead all our efforts to successfully implement the Modern Silk Road project, which [also] encompasses Azerbaijan, Turkey, Kazakhstan and Kyrgyzstan,” Kyrgyzstan’s President Sooronbai Zheenbekov said while addressing the summit on Monday.

The five countries are members of the Turkic Council, an international organization founded in 2009. Turkmenistan is not currently official member of the council due to its neutral stance.

BRI is also known as the 21st Century Silk Road. It is being designed to promote economic co-operation among countries along the proposed routes.

Since 2013, when Chinese Premier Xi Jinping announced the launch of the project, China has executed more than 100 agreements with 86 countries. At the same time, Beijing is reported to have invested $50 billion in 24 countries along routes, creating 75 industrial and trade zones and 200,000 jobs.

Meanwhile, officials in Azerbaijan and Kazakhstan, both Caspian littoral states, are working to adjust their local infrastructure. Both countries are benefiting from their geographical location and positioning along the trade routes, which allows them to act as pivotal overland transit centers.

Azerbaijan’s position on the western side of the Caspian Sea and its close proximity to its fellow Turkic state Turkey, give it the potential to become a major transit hub in the region. Baku, the capital, stands at the crossroads of major air, sea, rail and land routes within Eurasia, including the Trans-Caspian International Transport Route, the North-South and East-West routes, and the Baku-Tbilisi-Kars railway.

Launched last October, Baku-Tbilisi-Kars adds value to the region and consumers, by cutting transit time nearly in half. What normally takes 25-30 days to move from China to Europe will take only 15. Azerbaijan invested over $670 million in the railway’s construction.

“This is a new transport corridor, a new transport artery. With the implementation of this project, Azerbaijan, together with neighboring countries, is re-creating the transport map of Eurasia. [...]Kazakhstan, Turkey, and Azerbaijan already use this road,” Azerbaijan’s President Ilham Aliyev said on Monday.

Kazakhstan, Central Asia’s largest country and largest economy, is also well situated and regarded as a bridge for goods moving from the Far East and through the Caspian. China, with its $11.2 trillion economy and global exporter status, sees Kazakhstan as a gateway to western markets. Astana and Beijing agreed in 2013 to link Kazakhstan’s railways to China’s project, and are already working on laying down nearly 1,500 km (932 mi) of railway tracks.

“Transportation of containers from China via Kazakhstan to the Caspian Sea, the Caucasus region, and Europe is a new opportunity for us in terms of strengthening trade and economic cooperation,” said President Nursultan Nazarbayev.