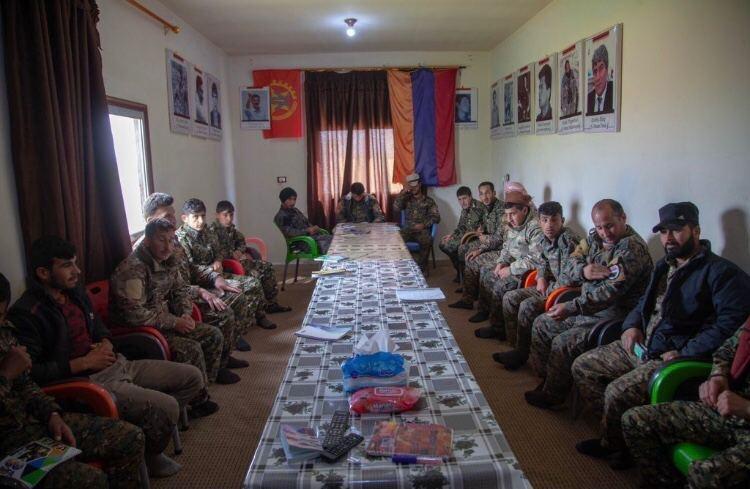 A meeting of the Kurdish militants and the Armenian military officials on October 1, 2020. / Twitter

The Defense Ministry of Turkey has urged the Kurdish PKK terror group and its Syrian wing YPG, who collaborate with the Armenian Army in the occupied Nagorno-Karabakh region of Azerbaijan, to leave the region immediately.

"PKK/YPG terrorists collaborating with Armenian terrorists who target innocent civilians must leave the region immediately, otherwise, as always, they will be once again disappointed,'' the defense ministry’s spokeswoman Nadide Sebnem Aktop told reporters on October 4.

She also dismissed Armenian claims that Turkish aircraft and drones had been deployed in the region, and said “nobody except Yerevan's supporters took those assertions seriously”.

According to Middle East Monitor, around 300 militants belonging to the Kurdish groups were transported by Armenia from various countries in the Middle East and placed in the Nagorno-Karabakh region, where they have subsequently began training Armenian militias in battle and guerrilla tactics against Azerbaijani forces over the past month or two.

“The transfer of militants was a result of a covert deal struck between Armenia and the PKK towards the end of July. The Armenian militias trained by the Kurdish militants are also reportedly those carrying out attacks on Azeri civilian settlements” the report added.

The militants reportedly make their way to Armenia through transit routes mainly in Iran and from northern Iraq. One of the routes included the transfer of terrorists from Iraq’s Sulaymaniyah to Sabis, then to Kermanshah in Iran. Another group from Mount Qandil in Iraq also passed through Iran’s Urmiya on their way to the occupied Nagorno-Karabakh region, Turkey’s Daily Sabah says.

Furthermore, Istanbul Azerbaijan Cultural Home Association Chairman, Hikmet Elp said that the PKK aims to settle in the Nagorno-Karabakh region and that the Yerevan administration is trying to change the demography of the area by transferring the terrorists and Armenians in Lebanon to the region.

Radio France International (RFI) also reported that fighters from Lebanon, Syria, and Latin America had volunteered to fight for Armenia against Azerbaijan in the ongoing conflict in the occupied Nagorno-Karabakh region. Around 30 volunteer fighters, some of whom had never held a weapon before, received "express training" before joining the attacks, the report added.

On October 6, Azerbaijan’s State Security Service released audio recordings of a dialogue between two PKK terrorists who had come to the region to fight alongside Armenian forces against Azerbaijan.

“Armenia uses foreign mercenaries, including members of the Kurdish terrorist groups whom Armenia has brought from Iraq and Syria, in its aggression against Azerbaijan. The State Security Service has intercepted conversations of the terrorists related to the PKK who are participating in combat activities against Azerbaijan,” the Azerbaijani intelligence service said at the beginning of a Youtube video that included the dialogue.

In the intercepted dialogue, the terrorists discussed the precarious situation on Armenia’s side and numerous losses. They also talk about how the Azerbaijani side effectively uses drones and regret having come to the war zone and being deceived by the Armenians.

On October 5, military sources told the Baku-based APA news agency that “most of the PKK militants fighting on the Armenian side have been destroyed, the rest began to operate as a provocative group jointly with local servicemen of Armenia”.

It was decided to bring 500 mercenaries gathered in Syria to Armenia on the night of October 4-5 and send them to guerrilla fighting in the occupied Nagorno-Karabakh region, the report added.

On October 3, the Turkish bureau of the US news channel CNN Turk published footage that claimed the PKK terrorists were fighting alongside the Armenian ASALA terrorist organization and Armenia's Army in ongoing battles in the Karabakh region.

The PKK is listed as a terrorist organization by Turkey, the US, the European Union, Australia, Japan, Azerbaijan, with the YPG being the terror group’s Syrian offshoot.

“Armenia has always embraced the PKK”, retired Turkish ambassador Uluch Ozulker told CNN Türk, adding that “it would not be a surprise that PKK was brought there over Iran”.

As Armenia became independent in 1991, it started to attract mercenaries who had their training at the ASALA camps in the Middle East, many of whom participated in the acts of terror and served prison terms for that.

“The most famous of them, Monte Melkonyan from California, who was among the organizers of the Orly attack, is now a much-revered national hero in Armenia,” according to the Baku-based Topchubashov Center.

Clashes between Armenian and Azerbaijani forces along the Line of Contact erupted after Armenia's forces deployed in the occupied Azerbaijani lands started shelling the military positions and civilian settlements of Azerbaijan on September 27. Azerbaijani troops took immediate counter-attack measures to push back against Armenia’s artillery offensive. A total of 28 civilians in Azerbaijan have been killed and 144 people have been injured as a result of shelling of residential settlements by Armenia's forces since September 27.