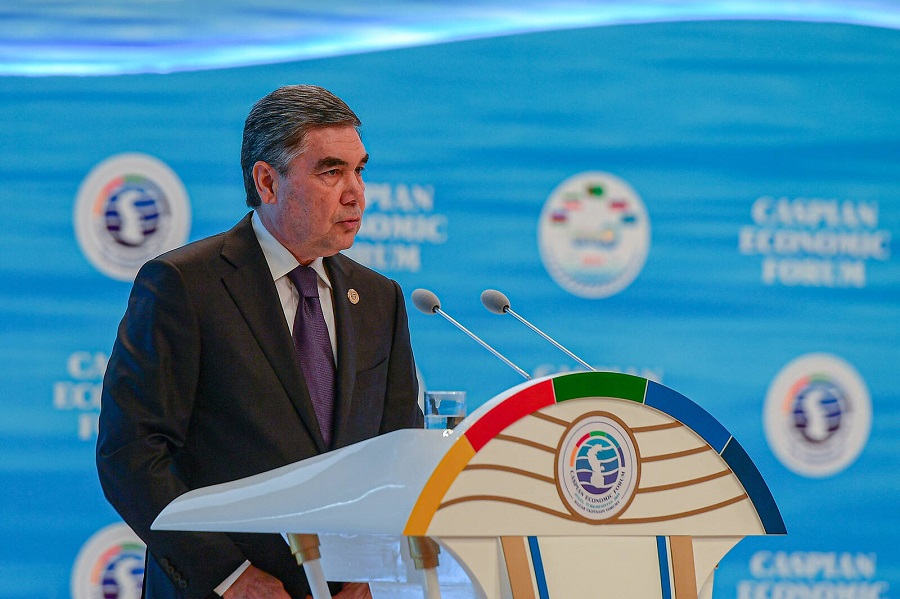 President Gurbanguly Berdimuhamedow at the two-day forum that took place in Avaza, a coastal resort city in Turkmenistan along the Caspian Sea.

Trade, investment ties and technologies within the Caspian region were the main theme in Turkmenistan last week at the inaugural Caspian Economic Forum.

“Both [Caspian] littoral states and other countries are centered on the Caspian region as it is a large natural source of hydrocarbon resources, a global transport and transit hub, and promising territory for expanding international trade,” President Gurbanguly Berdimuhamedow said at the event, according to reports by Turkmenistan Today.

The Caspian Sea region is considered one of the oldest oil-producing areas in the world with significant oil and natural gas reserves concentrated in both offshore and onshore deposits.

Russia’s prime minister says vast hydrocarbon reserves give all five states a geostrategic advantage, but they need to move on it and boost their economies also through non-oil industries.

“A modern economy is not limited with oil and gas production. Digital technologies, clean energy and rational use of natural resources, free movement of goods and services – these are what today make the country strong and competitive,” Dmitry Medvedev said while addressing the forum, according to reports by TASS.

Innovative technologies also came under the spotlight at the Caspian forum, when each country showcased recent national achievements.

AzerTelecom, the backbone internet provider which connects Azerbaijan to the international Internet network, was one of several Azerbaijani companies that took part at the Caspian Economic Forum in Avaza.

The company’s participation at the forum is no coincidence. Earlier this year AzerTelecom, which is the subsidiary of the country’s first mobile operator - Bakcell, launched "Azerbaijan Digital Hub" program, which is meant to turn Azerbaijan into a regional digital hub. AzerTelecom is looking to make Azerbaijan a link between the Caucasus, the Middle East, Central and South Asia, improving access to the Internet and digital services for 1.8 billion people.

AzerTelecom recently entered into an agreement with Kazakhstani Transtelecom and KazTransCom to build a fiber-optic cable line stretching over nearly 400 km (249 mi) along the bottom of the Caspian Sea, which will help increase regional capacity and global connectivity. The initiative is a part of the Trans-Caspian ambitious project implemented by AzerTelecom within its “Azerbaijan Digital Hub” program.

Meanwhile, the two-day forum reportedly resulted in more than $380 million in trade deals, after Turkmenistan-made goods, including petrochemicals, were bought by entrepreneurs from Russia, Turkey, the United States, Singapore, and other countries. Participants inked 57 documents covering multiple fields, such as information technologies, trade, transportation and agriculture, for an undisclosed fee.