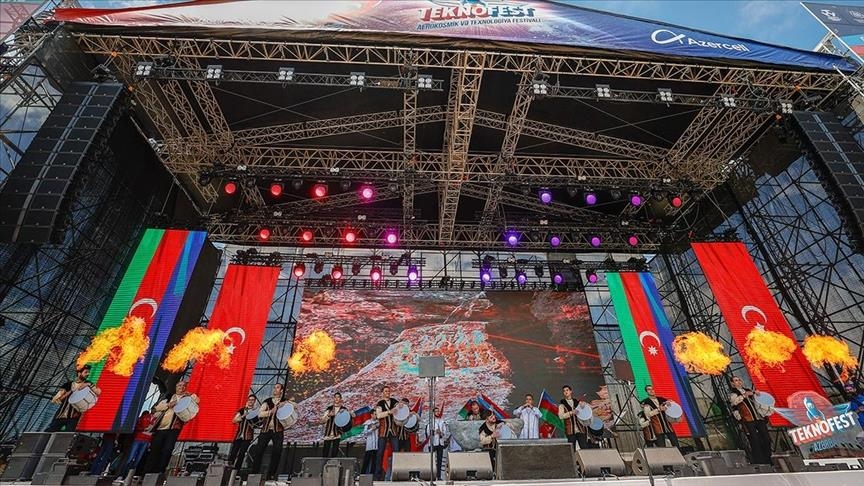 TEKNOFEST Azerbaijan Aerospace and Technology Festival kicked off on Thursday in Azerbaijan’s capital Baku. The Seaside Boulevard and Crystal Hall sports and concert complex on the boulevard’s western end are the main venues where the famous festival welcomes visitors and participants.

The four-day event is expected to attract more than 200,000 visitors, including 500 from 33 countries from around the world. More than 1,000 technology teams and 6,000 participants have registered for the festival.

Azerbaijan’s President Ilham Aliyev and his Turkish counterpart Recep Tayyip Erdogan are expected to visit the festival on May 28.

“The festival of aerospace engineering and technology TEKNOFEST is being held in Azerbaijan, for the first time outside of Turkey. This is an example of friendship and brotherhood between our countries,” Minister Nabiyev said.

Developers of a total of 287 startup participants from 32 countries have applied for participating in the hi-tech jamboree, including 101 introduced by the local developers in Azerbaijan. Fifty startups have made it through to final, of which 15 are from overseas industries located in the US, Argentina, Estonia, Jordan, Egypt, Pakistan, and Turkey. Among the finalists, there are also 35 Azerbaijani startuppers.

Winners will be personally awarded by the Azerbaijani and Turkish presidents.

A cybersport tournament, called Rocket League, featuring participants from ten European countries, including Azerbaijan, was already announced as part of TEKNOFEST Azerbaijan on May 25.

A total of 30 competitors in 10 teams from Azerbaijan, Hungary, Luxembourg, Monaco, the Netherlands, Slovakia, Spain, Sweden, Turkey and Wales will compete in the championship through May 29. The high-octane tournament in Baku is watched by 21 representatives from national federations in Europe, including the European Esports Federation, one of the organizers of Rocket League.

A total of ten competitions and challenges, focusing mainly on unmanned aerial vehicles, amateur satellite modeling, robotics, as well as agricultural, socially-oriented, and green technologies and sailplanes, will be held as part of the festival. This year’s festival also features such initiatives as the “Baku Skills” competition in 3D printing, the Take-Off Azerbaijan Startup Summit of startuppers and potential investors, the Smart Karabakh Hackathon for producing smart technology solutions for use in the Karabakh region of Azerbaijan, and Rocket League Esports EuroCup.

TEKNOFEST is Turkey's first and only aerospace and technology festival, boasting the world’s largest show of technological competitions. Having made its debut in 2018 with 20,000 participants competing in 14 categories, the festival attracted nearly 200,000 competitors in 35 types of technological challenges in 2021.

TEKNOFEST Azerbaijan is the first overseas edition of Turkey's national technology festival since its launch in 2018.