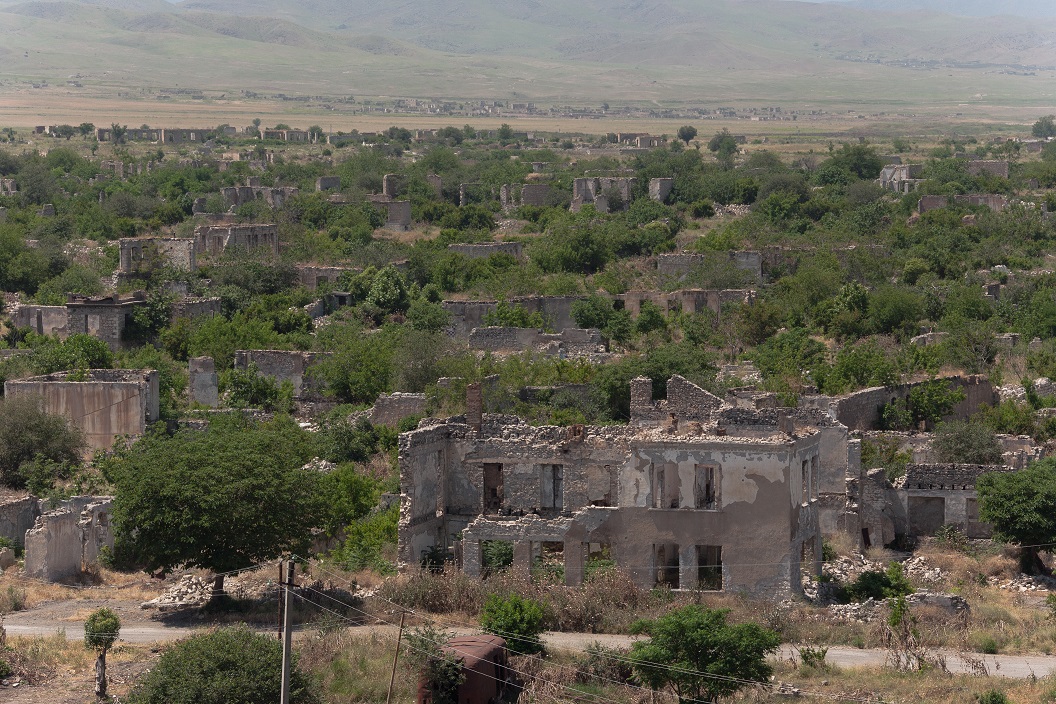 Ruins of "ghost town" Aghdam, which was occupied by Armenia's forces in 1993 / Wikimedia Commons

New details about the wanton destruction of cultural heritage by Armenia in the occupied territories of Azerbaijan have surfaced, as Azerbaijan’s Foreign Ministry and state-owned satellite operator Azercosmos presented earlier this week a groundbreaking report that includes satellite imagery.

The report, titled “Illegal Activities in the Territories of Azerbaijan under Armenia’s Occupation: Evidence from Satellite Imagery,” details Armenia’s systematic annihilation of public and private property via dozens of satellite images, and was presented at ADA University in Baku on Monday.

“The occupation of the territories of Azerbaijan has been accompanied with serious and systematic interference with property rights, which include extensive destruction and appropriation of public and private property, appropriation of land, dismantling of abandoned houses or public buildings for use as construction materials, building of new houses on lands and properties of the Azerbaijani displaced persons,” the report reads.

“Armenia takes consistent measures aimed at altering the Azerbaijani historical and cultural features of the occupied territories. Purposeful destruction and looting of the cultural heritage in the occupied territories, including archeological, cultural and religious monuments, and archeological excavations pursue the goal of removing any signs of their Azerbaijani cultural and historical roots.”

Aerial photography from the Azersky surveillance and oversight satellite revealed the ruins of severely damaged mosques that date to the 17th and 18th centuries in the city of Shusha, namely Saatly, Mardinli and Ashaghy Govhar Agha. Damage to the Juma mosque, located in Aghdam and dating to the 19th century, was also shown. 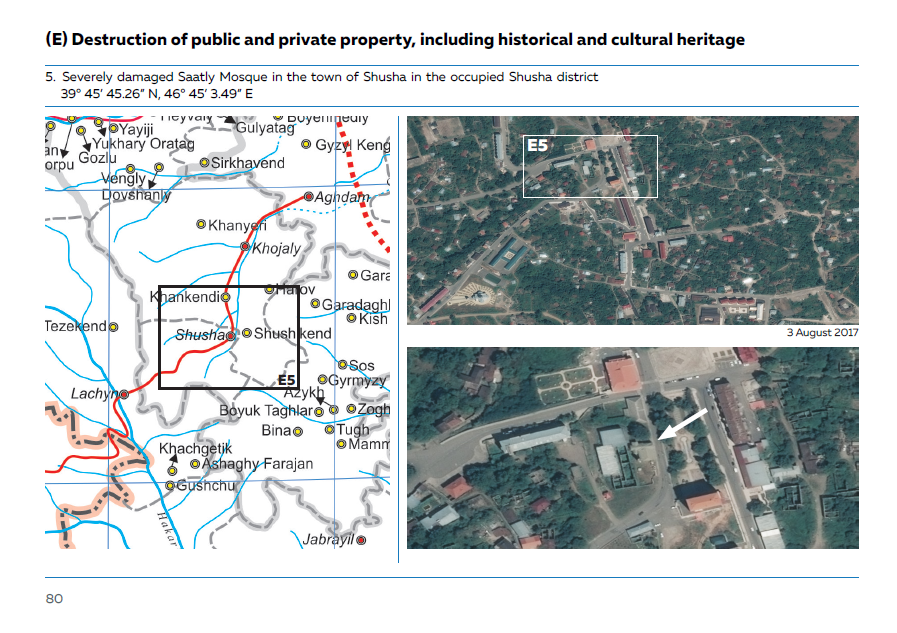 Satellite imagery also shows traces of cultural vandalism in the villages of Dondarli, Damirchilar, Garadagly, Ismailbayli, as well as the towns of Fuzuli, Aghdam and Jabrayil. Today the ruins of Juma mosque in Aghdam, for example, are used as a cattle and swine barn by the Armenians that were relocated there after the occupation, according to Azercosmos’s report.

Azerbaijan's Nagorno-Karabakh region and seven adjacent districts fell under Armenia’s occupation as the result of a full-scale war that lasted from 1991 to a ceasefire agreement in 1994. Armenia was trying to seize the Nagorno-Karabakh region that had partial ethnic Armenian population living alongside indigenous Azerbaijanis. The war resulted in the death of 30,000 Azerbaijanis, displacing one million, and occupying 20 percent of Azerbaijan’s internationally recognized territory.

According to 2015 data compiled by the State Committee for Work with Religious Organizations of Azerbaijan, the number of historical and cultural monuments in the occupied lands exceeds 900. Some sources even claim it to be more than 1,500. Of them, 403 are historical-religious monuments, including 67 mosques, 144 tombs and 192 sanctuaries.

Some 738 historical monuments, 28 museums with 83,500 exhibits, four photo galleries, 14 memorial complexes have been plundered or destroyed completely or partially in the wake of Armenia's state-sponsored vandalism acts in the occupied lands, according to the Foreign Ministry of Azerbaijan.

Calculations by the Special Investigation Department under the Military Prosecutor’s Office of Azerbaijan claim that the overall amount of material damage to the economy of Azerbaijan due to the occupation is around $819 billion.