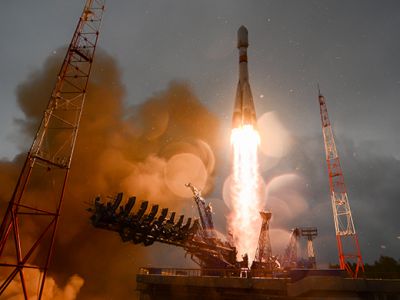 Monday’s launch marked the fifth flight of a Soyuz-2 rocket this year that lifted off from the Plesetsk Cosmodrome, a spaceport on the edge of the Russian Arctic.

Russia is building up its presence in space with the launch of another surveillance satellite controlled by the Space Troops of the Aerospace Force.

“On Monday, November 25, at 20:52 Moscow Standard Time, a crew of the Space Troops of the Aerospace Force of the Russian Federation launched the Soyuz-2.1v light launch vehicle with a spacecraft designed in the interests of the Defense Ministry from the State Cosmodrome of the Ministry of Defense of the Russian Federation in the Arkhangelsk region,” read a statement issued by Russia’s defense ministry on Tuesday, referring to the Plesetsk Cosmodrome.

The satellite will monitor the condition of other Russian satellites in orbit, suggesting that the newly launched equipment is being used for surveillance. The satellite is under the control of the Space Troops of the Aerospace Force and is fitted with special optical equipment that allows it to photograph Earth.

The satellite is included in the list of space objects of Russia’s space monitoring system, which is aimed at exploring military and space systems, detecting hostilities in and from space, as well as providing Russia’s armed forces with information about space.

Launching satellites into orbit to inspect unspecified Russian satellites via photographic surveys is not something new for Russia. In 2017, Russia launched three small satellites treated as a single system: Kosmos-2519, Kosmos-2521 and Kosmos-2523, some used to diagnose the technical conditions of Russian satellites and determine if they could be returned to working order.

Monday’s launch marked the fifth flight of a Soyuz-2 rocket this year that lifted off from the Plesetsk Cosmodrome, a spaceport on the edge of the Russian Arctic. The latest launch of a Russian-made carrier rocket for placing payloads into low Earth orbit was successfully launched in September.

Soyuz-2 is considered a next-generation rocket after Soyuz-U, which underwent 435 launches from Plesetsk Cosmodrome from 1973 to 2012. The Soyuz 2-1v rocket is a modified version of the 2 that flies without the four liquid-fueled strap-on boosters used on standard Soyuz configurations.