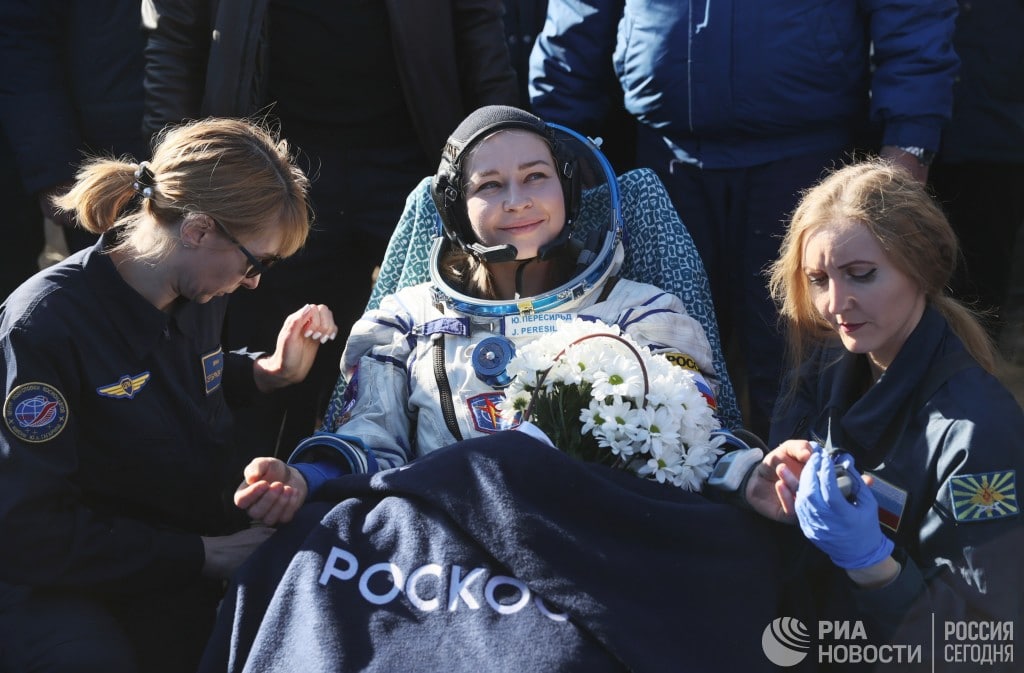 The 38-year-old director and one of Russia's most famous actresses, who arrived at the station on October 5 to film a segment of a new fictional movie titled "Challenge," have successfully completed their mission. / RIA Novosti

After spending 12 days on board the International Space Station (ISS), the first professional film crew to travel to space returned to Earth on Sunday.

Their journey home began with the undocking of Soyuz MS-18 from the Nauka multipurpose laboratory module on Sunday at 4:14 a.m. Moscow time. The spacecraft performed a deorbit burn and shed its orbital and propulsion modules before re-entering Earth's atmosphere and descending under a parachute for a soft landing.

The 38-year-old director and one of Russia's most famous actresses, who arrived at the station on October 5 to film a segment of a new fictional movie titled "Challenge," have successfully completed their mission. The Russian filmmaking duo was ferried back to terra firma by cosmonaut Oleg Novitsky, who wrapped up his 191-day mission on the space station.

After being extracted from the capsule to applause and a bouquet of flowers, Peresild, who plays the film's starring role, admitted she was “sad” to have left the ISS.

“It seemed that 12 days was a lot, but when it was all over, I didn't want to leave,” BBC quoted Peresild as saying before being carried off by medical workers for an examination. “This is a one-time experience.”

Earlier this month, the film-makers blasted off onboard the Soyuz MS-19 craft from the Russia-leased Baikonur Cosmodrome in Kazakhstan. Both Shipenko and Peresild had to go through a three-month training program before joining a mission to the ISS, along with veteran cosmonaut Anton Shkaplerov.

The movie’s plot centers around a surgeon launched to the space station on short notice to save a crew member who suffers a heart condition. In the film, the doctor performs heart surgery in zero gravity to save the life of a cosmonaut. In total, about 35-40 minutes of screen time should have been filmed in orbit.

Seasoned astronaut Shkaplerov, along with the two Russian cosmonauts who were already aboard the ISS, is said to serve several behind-the-scene roles while in orbit. Shkaplerov will stay on the station and return to Earth in March or April along with Dubrov and Vande Hei, who would have spent nearly a year in orbit since its launch on April 9.

The movie is a joint production of Roscosmos, the Russian television station Channel One and the studio Yellow, Black and White.

The first full-length movie filmed around 250 miles above Earth will beat a Hollywood project announced last year by the iconic Mission: Impossible franchise star Tom Cruise together with NASA and Elon Musk's SpaceX.