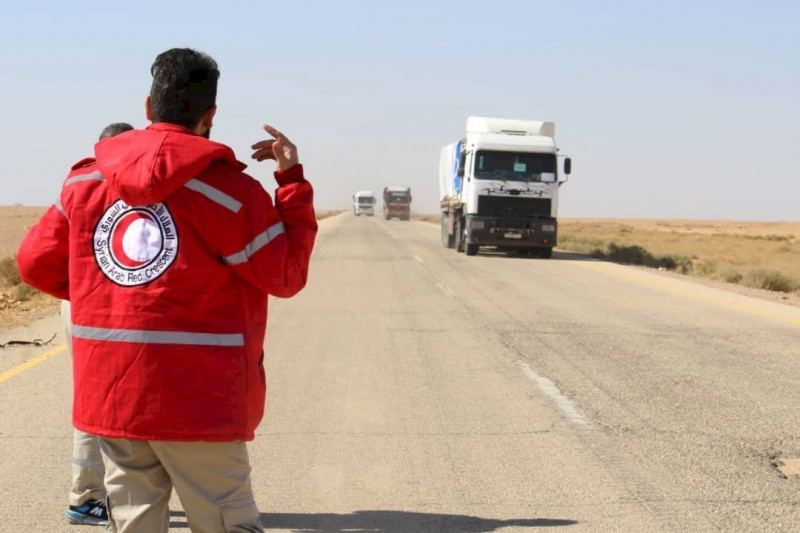 On May 22, Colonel General Mikhail Mizintsev, head of Russia’s National Centre for State Defence Control, and Hussein Makhlouf, Syria’s local administration minister, released a joint statement about the problems hindering the return of refugees from the Rukban camp.

A joint Russia-Syria coordination center for refugee repatriation has rejected Washington’s proposal to send a third humanitarian convoy to the Rukban refugee camp located on the Syrian-Jordanian border. Officials are blaming the United States for supporting Syria-based militants located in Al-Tanf.

“Representatives of the American side again call for a third humanitarian convoy, but we have repeatedly seen from practical experience that this way does not lead to the solution of the problems of refugees, but only allows to provide U.S.-controlled militants with all the necessary,” the May 22 statement reads, according to the Russia’s Ministry of Defense. “Such an approach to solving the Rukban problem is unacceptable.”

Rukban, inhabited since 2014, has more than 60,000 Syrian refugees, most of whom were displaced from Homs, Hama and Damascus. The camp is located near to a 55-kilometer (34-mile) zone controlled by the U.S. in Al-Tanf, which some say impedes residents’ access into and out from the camp. Russia and Syria have repeatedly urged the Americans to allow for unimpeded access by refugees, accusing the U.S. of using the residents as human shields to protect against troops based in Al-Tanf, and delaying plans to evacuate the camp.

“It is necessary to intensify the process of withdrawing Syrian citizens and disband the Rukban camp during the remaining days of May and June, because in conditions of shortage of water and food, as well as the establishment of heat, life there will become absolutely unbearable in July-August,” the joint statement reads.

Russia and Syria take credit for already having released nearly 13,000 residents of the camp, some as recent as last week.

“On 22 May, 370 refugees managed to leave the Rukban camp via a humanitarian corridor with the Jleb checkpoint,” Sputnik quoted Major General Viktor Kupchishin, the head of Russia’s defense ministry’s center for Syrian reconciliation, on Thursday. “All those who left the camp were provided with medical assistance, basic necessities and food.”

Residents of the camp have not had adequate access to health care and basic food items, which has reportedly led to the spread of illnesses, resulting in the deaths of children. In January, eight Syrian children reportedly died because of freezing temperatures and a lack of medical care.

Russia has gained a foothold in Syria over the last four years when it began to intervene militarily in Syria and prop up President Bashar Al Assad, who has been embattled since civil war broke out in 2011. The London-based Syrian Observatory for Human Rights has estimated that 560,000 people have been killed in the conflict and more than half of the Syrian population has been displaced, either internally or throughout the world.