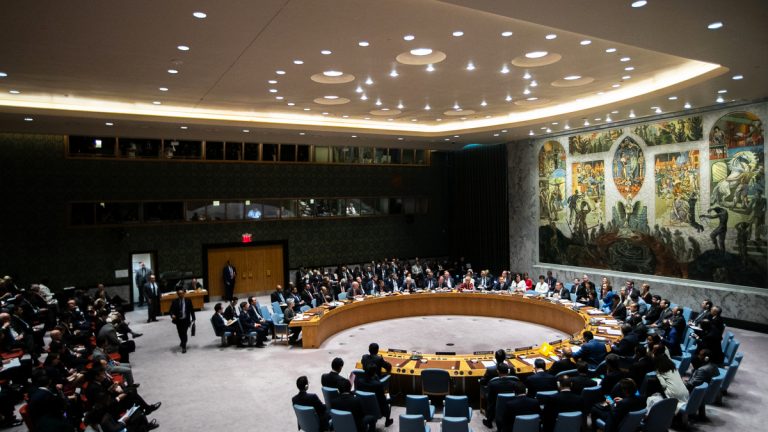 Seeking to gain more support in the 15-member Security Council, the US introduced a revised resolution on Wednesday in a bid to extend an arms embargo on Iran, which has been strongly opposed by veto-powers Russia and China. / Jeenah Moon / Bloomberg

A Russian permanent representative to the Vienna-based International Organizations has described a US resolution to extend a UN arms embargo against Iran as a violation of UN Security Council Resolution 2231 which endorsed the 2015 nuclear deal, officially known as the JCPOA.

"US attempts to extend the arms embargo against Iran constitutes a violation of UNSC Resolution 2231 by Washington," Russia’s Permanent Representative to International Organizations in Vienna Mikhail Ulyanov wrote on Twitter on Friday, reported TASS. "The only legitimate way to extend the embargo is a relevant decision of the Joint Commission on the Joint Comprehensive Plan of Action (JCPOA) to be made by consensus."

Seeking to gain more support in the 15-member Security Council, the US introduced a revised resolution on Wednesday in a bid to extend an arms embargo on Iran, which has been strongly opposed by veto-powers Russia and China. In her statement, US Ambassador Kelly Craft said that a draft Security Council resolution to extend the existing embargo on conventional weapons sales to and from Iran was requested by countries in the Middle East that have suffered the most "as a result of the Iranian regime’s active support for terrorism and mayhem across the region and beyond".

Voting at the United Nations on the revised US resolution started on Thursday and is set to finish on Friday. Due to the coronavirus pandemic, the 15-member council has been operating virtually.

The landmark nuclear deal, also known as JCPOA and signed by the five permanent members of the UN Security Council, namely the United States, the United Kingdom, Russia, France and China, plus Germany (P5+1), was designed to limit Iran’s capacity to produce weapons-grade nuclear fuel for a specified period, in exchange for cash that had been frozen and the lifting of nuclear-related sanctions.

After Washington's unilateral withdrawal from the agreement in May 2018, the Trump administration threatened to trigger so-called snapback UN sanctions against Iran if it fails to secure the embargo extension.

On his part, Iranian Foreign Minister Mohammad Javad Zarif said that the United States is not in a position to trigger the snapback mechanism which returns all the UN sanctions on Iran.

Meanwhile, in a letter to UN Secretary-General Antonio Guterres sent in June, Russian Foreign Minister Sergei Lavrov stressed that there are no objective reasons to raise the issue of extending the weapons embargo on Iran as the measures stipulated by UN Security Council Resolution 2231 were temporary.

"The application of relevant provisions of UN Security Council Resolution 2231 was never envisaged after October 18, 2020 and there are no legal or other reasons to review this concept," TASS quoted the letter as saying. "Objective grounds for raising the Iranian weapons embargo issue at the UN Security Council do not exist. Weapons supplies have no relation to Iran’s nuclear program."