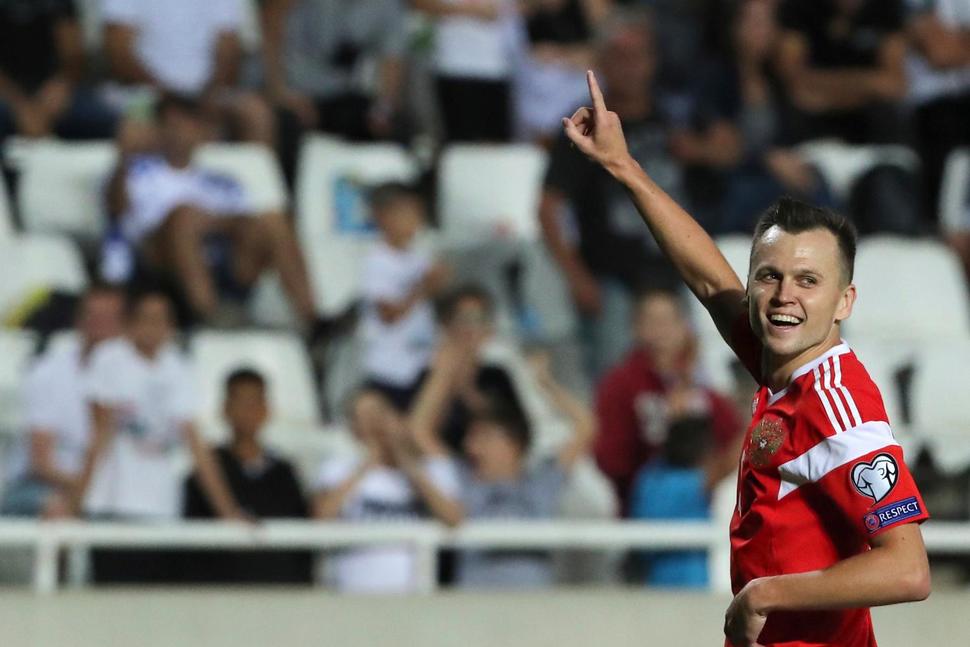 The national football (soccer) team of Russia booked its place in finals of the 2020 UEFA European Football Championship, commonly known as UEFA Euro 2020 or simply Euro 2020, after thrashing Cyprus 5-0 on their own soil in Nicosia on Sunday.

With an impressive victory over 10-man Cyprus team in the qualifying competition, Russia has passed the qualification for the 24-team tournament along with Poland from Group G, Group I rival Belgium and Italy from Group J.

Stanislav Cherchesov's team needed only draw to ensure a top-two finish and qualification, but an early strike scored by Denis Cheryshev in the ninth minute secured them prematurely access to next summer’s finals. Any thoughts of a Cyprus comeback were ended in just the 28th minute when Kostas Laifis picked a red card for a nasty lunge on Russian player Sergei Petrov.

The further goals of Sunday’s game scored by Magomed Ozdoev, Artem Dzyuba, Aleksandr Golovin and Denis Cheryshev paved Russia the path to the final game of what is considered the most prestigious tournament in Europe. With a total of 21 points gained over eight of ten group stage rounds, Cherchesov’s team has grabbed the second spot in its Group I behind leaders Belgium.

Coach Stanislav Cherchesov believes that Sunday’s triumph was only a first step in the ambitious plan set for the Russian national team for the UEFA Euro 2020.

“The main task is to win the European Championship,” said Cherchesov at the press conference following the match with Cyprus, according to Championat. “And the issue of entering the tournament was a local task.”

On November 16, the Russian national team will attempt to get even with the Belgians, who hammered Russia 1-3 earlier in the qualifying tournament in St. Petersburg, and, possibly, come out on top in the group.

“We fight for the first place in the group. And we must not forget about the draw of the Euro. We’ll finish the group, try to take first place, find out the opponents in the Euro - and we will prepare for them,” added Cherchesov during the press conference.

After the match against San Marino scheduled for November 19, the national team will complete the qualifying part. The Russian national team has already set a historical record by scoring seven consecutive victories in the qualifying competitions, surpassing the success of the team led by Oleg Romantsev in 1999. That year, Russia won six meetings in a row but retreated in the seventh.

UEFA Euro 2020 that brings together 24 UEFA national football teams will take place in 12 different cities all around Europe, including St. Petersburg. Russia’s second-largest city after Moscow was granted the right to host three group stage matches and one of the quarterfinals of the 2020 UEFA Euro Cup following the decision made by the UEFA Executive Committee.

The European Qualifiers competition, which is running from March 2019 until March 2020, will decide which teams will fill the 24 places in the finals. On November 20, 20 out of the 24 qualifiers for UEFA Euro 2020 will be known, with the top two teams from each of the 10 qualification groups having made it through to next summer’s finals. The last four teams will book their place in the final tournament via the European Qualifiers play-offs scheduled for March 2020.