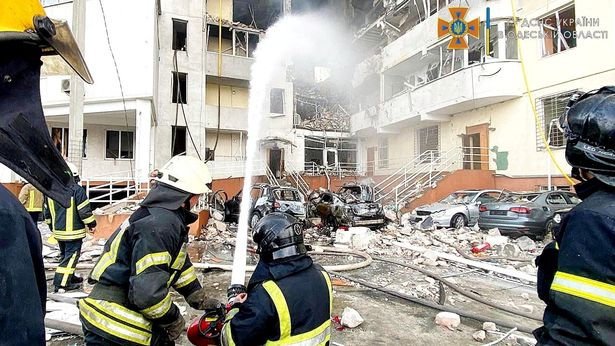 Ukrainian President Volodymyr Zelensky said that Russia fired a total of seven missiles at Odesa, two of which were shot down. / Reuters

Russia’s armed forces have launched missile attacks on residential areas of Ukraine’s port city of Odesa, killing eight civilians, including a three-month-old baby, and injuring 18 others.

Speaking at a press conference on Saturday, Ukrainian President Volodymyr Zelensky said that Russia fired a total of seven missiles at Odesa, two of which were shot down.

According to preliminary reports, the missiles were fired on Saturday afternoon by Tu-95 strategic aircraft. Two aerial targets were said to be shot down by Ukrainian air defense, while another two rockets hit a military facility and two residential buildings.

Earlier, Odesa Mayor Hennadiy Trukhanov said that a Russian missile hit a 16-story residential building in Odesa. About 1,000 square meters of a city cemetery were destroyed as a result of the missile strike.

Condemning the incident, Foreign Minister Dmytro Kuleba said that “the only aim of Russian missile strikes on Odesa is terror.”

“Russia must be designated a state sponsor of terrorism and treated accordingly,” Kuleba wrote on his Twitter page.

“No business, no contacts, no cultural projects. We need a wall between civilization and barbarians striking peaceful cities with missiles,” he added.

The Russian Defence Ministry said, in turn, that the missile strike on Odesa was targeting “a logistics terminal at a military airfield [...] where a large batch of foreign weapons from the United States and European countries was stored.”

The fall of Odesa, which is home to about one million people, would give a strategic advantage to Russia as the city controls access to and over the Black Sea and is a tremendously important port vis-a-vis the movement of cargo and resources through Europe.

Situated 300 km away from the Russian-annexed Crimean Peninsula, Odesa is the largest and only deep-water port in Ukraine. After losing its naval base in Sevastopol following the annexation of Crimea in 2014, the Ukrainian navy moved its headquarters to Odesa.

The port city holds strategic, military, and economic importance to Ukraine. Some 70 percent of all Ukrainian imports and exports were in the form of sea cargo – and Odesa handled about 65 percent of that.

Russian troops, advancing west of Crimea, have already taken the port city of Kherson, just 120km (75 miles) east of Odesa. Russian navy ships have been spotted close to Ukrainian territorial waters, raising fears of a possible attack from the sea.

Meanwhile, Russia resumed its attacks on the Azovstal iron and steelworks in Mariupol after claiming victory in the city and calling off an assault on the plant.

President Zelensky warned that Kyiv would quit talks with Moscow if Russia destroyed “our people” surrounded in the war-torn city of Mariupol or staged referendums to create more breakaway republics on Ukrainian soil.

“If our men are killed in Mariupol and if these pseudo-referendums are organized in the (southern) region of Kherson, then Ukraine will withdraw from any negotiation process,” Zelensky said in a news conference in Kyiv.