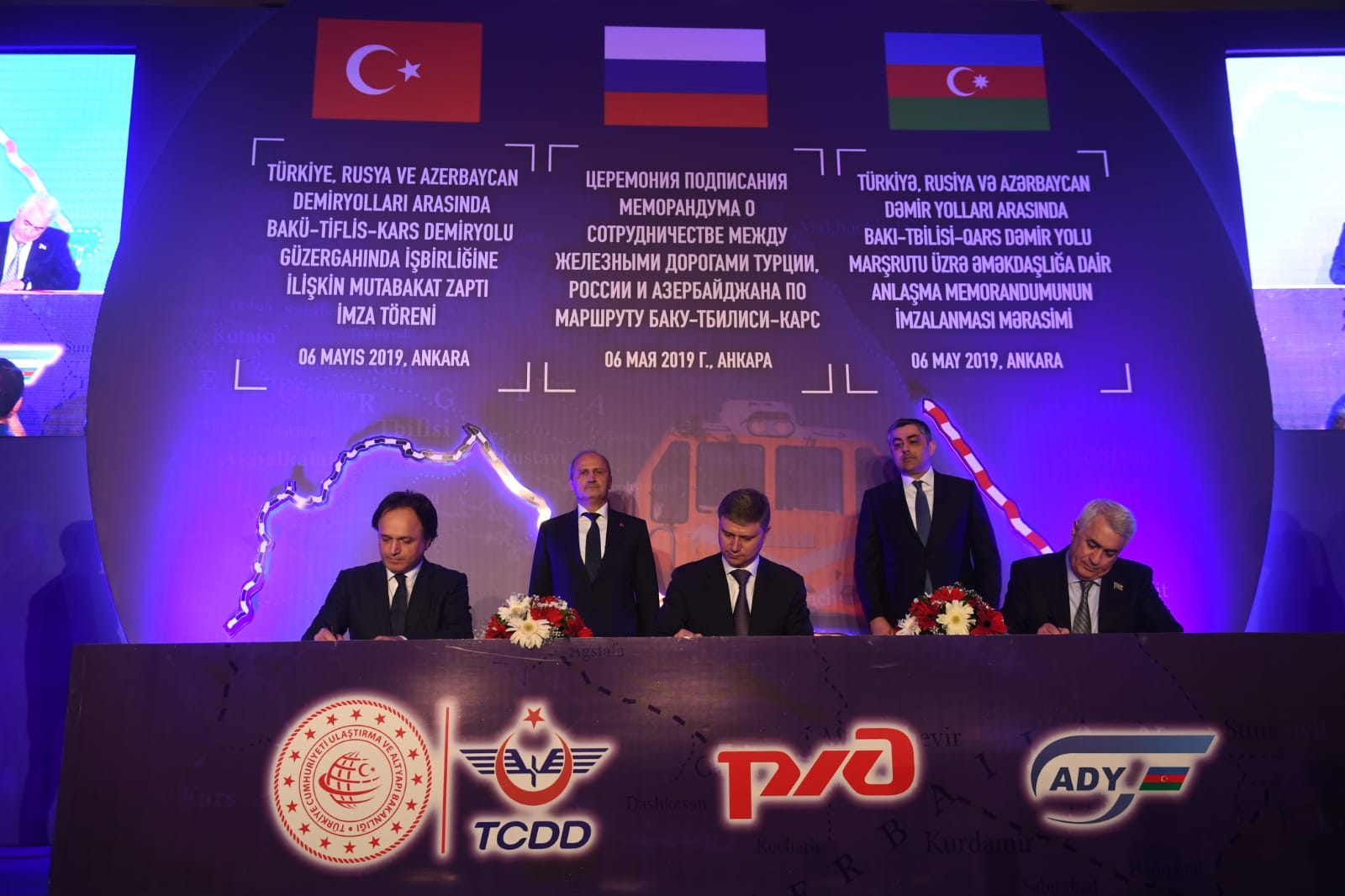 To leverage the potential of Baku-Tbilisi-Kars (BTK) railway in regional cargo supplies, officials from the state railway services of Azerbaijan, Russia and Turkey signed a trilateral memorandum of understanding on Monday in Ankara. The deal will grant access to the BTK to Russia’s eastern ports.

“The tripartite cooperation between Azerbaijan, Turkey and Russia, which will cover the railway sector, will boost the operation of the Baku-Tbilisi-Kars railway,” a statement published on the Azerbaijan Railway’s official website read. “It has been reaffirmed that a new form of cooperation will ensure that the cargo arriving in the eastern ports of Russia passes through the Caucasus and Anatolia to the necessary destinations.”

Five seaports and two cargo terminals operate in Russia’s east, including Ust Kamchatsk, Beringovsky, Anadyr, Providenija and Pevek ports along the Bering and Chukchi seas near Alaska; and Petropavlovsk-Kamchatsky and Magadan terminals near the Sea of Okhotsk, north of Japan. Railways that start from the Russian far eastern cities of Vladivostok and Birobidjan connect these ports and terminals to the central railway grid of Russia, traversing the world’s largest country and cutting through Kazakhstan.

Joining the BTK railway will allow cargo coming from Russia’s far east seaports to go westward to Georgia, Turkey and further westward to Europe, linking the Russian railway grid to the Turkish railway network for the first time. The Baku-Tbilisi-Kars railway, which helps move goods from the far east to Europe and pass through the Caspian region, went online in October 2018.

That railway, running from Baku through the Georgian capital of Tbilisi, to Kars in eastern Turkey, is considered the shortest, fastest and most reliable link between Europe and Asia. BTK has been dubbed “the Iron Silk Road,” referring to the ancient and famous trade and transport corridor known as the Silk Road.

On May 6, Director General of the Russian Railways Oleg Belozyorov met with his Azerbaijani counterpart Javid Gurbanov in Baku, where he proposed to create a regular container service from China to Baku, using the railway infrastructure in the city as a distribution hub within Azerbaijan. Belozyorov said the railway is a significant link in facilitating trade between east and west, and offered to maximize its potential.

The initial capacity of the BTK railway is estimated around three and five million tons of cargo for the first three years of operation, and by the fifth year it is expected to carry between six and eight million tons. Ultimately, Azerbaijan, Georgia and Turkey will increase their transportation capacity to 17 million tons of cargo.

In 2018, Russia shipped products worldwide worth a total of $449.3 billion. Around 54.5 percent of Russian exports reached European countries, while Asian importers purchased 36.8 percent. The rest were sent to Africa, North America, and Latin America.