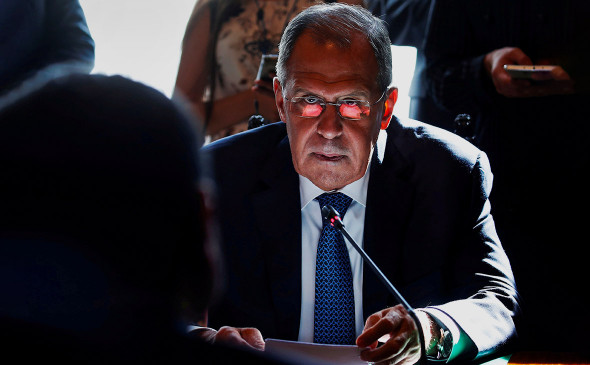 Before bilateral relations spiraled down, both Russian and NATO diplomats had worked together to build trust through dialogue and practical cooperation in the areas of common interest. / Maxim Shemetov / Reuters

Tensions between NATO and Russia have plunged to new depths this week after Moscow announced it was suspending its diplomatic mission to the western alliance.

According to Russia’s Foreign Minister Sergei Lavrov, the country will also close NATO’s offices in Moscow from November. The alliance’s information bureau in Russia’s capital will also be terminated.

The diplomat believes NATO is not “interested in equal dialogue.”

“If so, then we do not see much need to continue to pretend that some change is possible in the foreseeable future,” Lavrov said at the press conference on Monday.

“NATO has already, in fact, declared the impossibility of such changes,” he added.

Lavrov’s announcement comes in response to the recent expulsion of eight Russian diplomats from the alliance’s Brussels headquarters.

On October 6, NATO expelled eight members of the Russian mission to the alliance and halved the size of the country's team at its headquarters from 20 to 10.

NATO Secretary-General Jens Stoltenberg explained the alliance’s decision as a measure aimed to prevent the activities, which are “not in line with their accreditation.”

“This decision is not linked to any particular event, but we have seen over some time now an increase in Russian malign activity, and therefore we need to be vigilant,” Stoltenberg said on October 7.

At the same time, Sky News reported that the expulsions came “in response to suspected malign Russian activities, including killings and espionage.”

Meanwhile, the recent tense exchange is nothing new for NATO and Russia.

In 2018, NATO expelled Russian diplomats and reduced the country’s mission from 30 to 20 personnel over the alleged poisoning of former Russian double-agent Sergei Skripal and his daughter Yulia in Salisbury, the United Kingdom.

As part of a concerted global response, 20 countries, including the United States, expelled more than 100 Russian diplomats. In response, Russia expelled 60 US diplomats and closed the US Consulate in St. Petersburg.

NATO and Russia have been at odds since the Ukrainian crisis in 2014, followed by Russia’s takeover of Crimea — a Ukrainian territory that extends into the Black Sea. In addition, NATO has been accusing Moscow of “provocative military activities near NATO’s borders, irresponsible and aggressive nuclear rhetoric, as well as military posture and underlying posture.”

The Kremlin, however, had repeatedly denied the alliance’s numerous accusations.

Officials in Russia’s Foreign Ministry believe the NATO’s anti-Russian rhetoric and actions aim to strengthen the bloc’s internal unity and create “the appearance of its relevance in modern geopolitical conditions.”