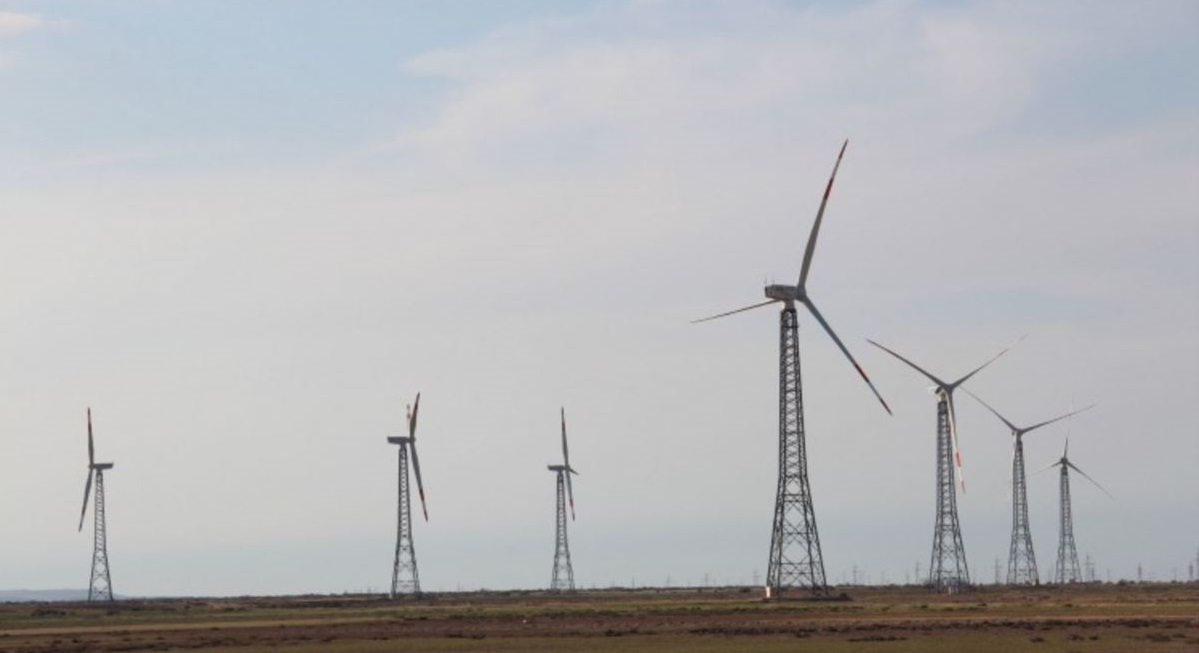 Wind turbines in the Khizi region of Azerbaijan, 100 kilometers north from Baku / Courtesy

According to the agreements, the ACWA Power energy company of Saudi Arabia and the Masdar Company of the United Arab Emirates will invest around $400 million to build wind and solar power plants with a combined energy generation capacity of 440 megawatts (MW).

Elnur Soltanov, Azerbaijan’s Deputy Energy Minister said that a 240-MW wind power project will be built by ACWA Power, while Masdar will construct a 200-MW solar farm. Both facilities are expected to be commissioned within the next two years.

“This is significant for Azerbaijan because today the overall amount of renewable energy generation in the country amounts to 1,276 megawatts, of which 1,135 come from hydropower,” Soltanov said in an interview with Real TV on Tuesday.

“It means that the share of solar, wind, and biomass energy is 141 megawatts, which is not what Azerbaijan strives for. The combined 440 megawatts electricity that will be generated by two new plants is more than 5 percent of our current renewable power.”

On January 9, ACWA Power — an energy giant with 56 assets in 11 countries and a portfolio of 31 gigawatts of power generation — inked an implementation agreement with the Azerbaijani Energy Ministry to develop, build, and operate a 240-MW wind power park in the Caspian country. At the same time, the sides signed a 20-year power purchase agreement for the project on a Build-Own-Operate basis.

On the same date, Masdar, which is ranked the leading energy company in the United Arab Emirates, landed a contract with Azerbaijan to develop, build, and operate a 200-MW solar power park 75 kilometers southwest of capital Baku. The project is expected to go online sometime in 2022.

Both projects sit well with the government’s efforts aimed at diversifying the energy mix of Azerbaijan, which relies heavily on fossil fuel reserves, by leveraging the vast renewable energy resources, including wind and solar power. President Ilham Aliyev has recently said in an “Energy Security” roundtable in Munich that the government plans to provide 30 percent of electricity through renewable energy by 2030.

The potential of wind power for enhancing the replenishable energy capability of Azerbaijan stands at 59.2 percent of the overall renewable sources, according to a report “Market Analysis Azerbaijan 2019” published by the German-Azerbaijani Chamber of Commerce. Wind in Azerbaijan blows more than 250 days out of 365 and is able to generate over 2.4 billion kilowatts per hour (kWh) of electricity per annum.

With a total of 8,000 MW potential supplies, solar power comes in at number two, according to the same publication. Sunshine is observed in Azerbaijan for around 2,400-3,200 hours annually. Biomass, geothermal, and hydropower are introduced to be the next promising renewables at respectively 900 MW, 800 MW, and 650 MW.

Meanwhile, Soltanov said these projects will also help Azerbaijan save 300 million cubic meters of natural gas, which is equal to 10 percent of the annual domestic consumption. This could contribute to energy exports of the country and generate more income, according to him.