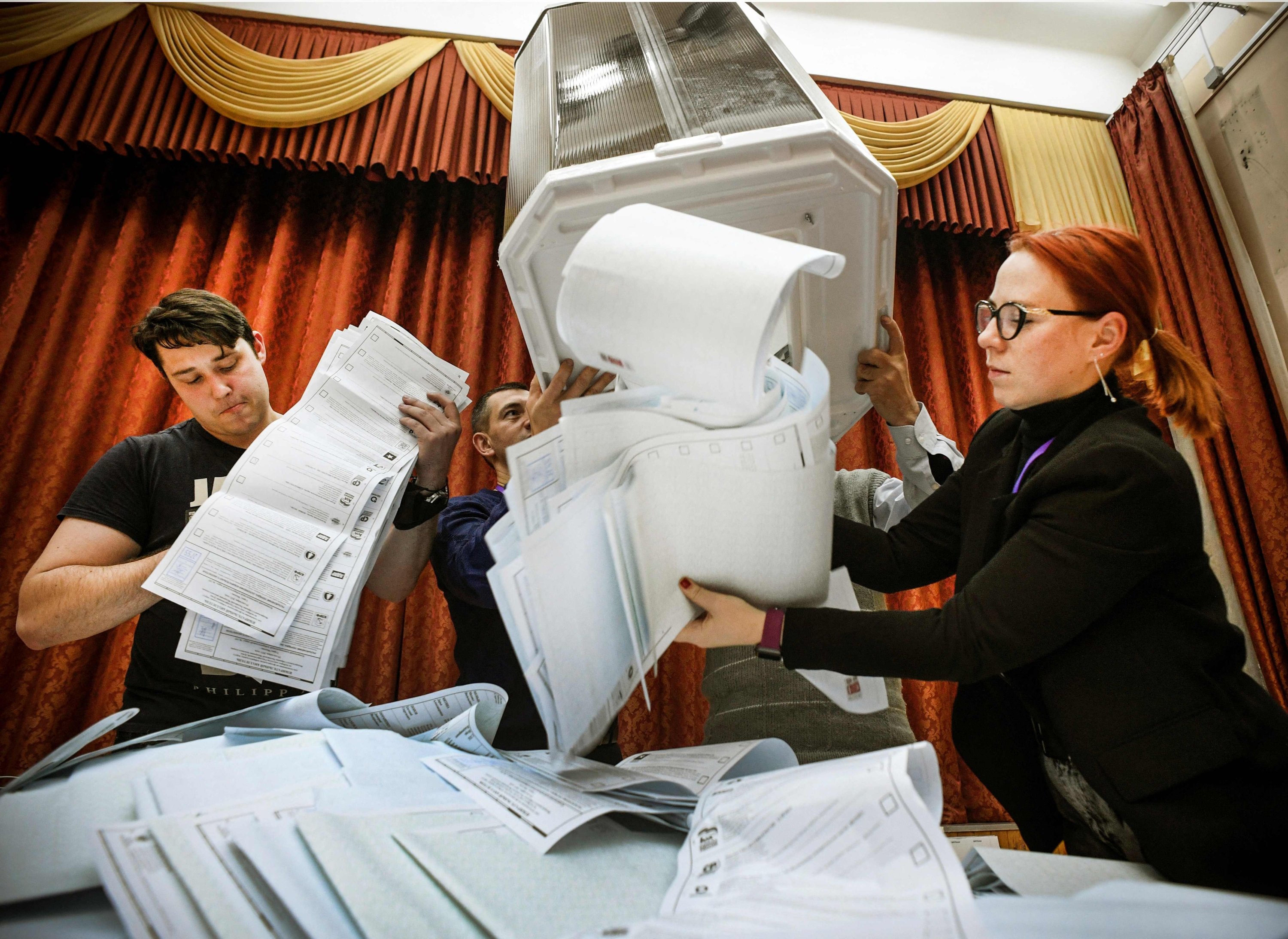 Members of a local electoral commission empty a ballot box at a polling station after the last day of the three-day parliamentary election, in Moscow, Russia, September 19, 2021. / AFP Photo

Russians have overwhelmingly voted for the ruling United Russia party in a three-day-long parliamentary election, the Central Election Commission (CEC) announced on Thursday.

According to the election authorities, 51.7 percent or more than 56 million of the eligible population cast their votes for members of the State Duma — the lower house of the Russian Parliament.

United Russia, the ruling political party of Russia, won the overall vote, getting 324 seats in the lower house of parliament. This gives the party a solid two-thirds majority in the 450-seat Duma, enough to adopt federal constitutional laws and overcome the veto imposed by the president.

United Russia’s nearest rival, the Communist Party, got 57 seats, while Fair Russia now has 27 seats in Parliament. They are followed by the nationalist LDPR party and New People with 21 and 13 seats, respectively.

Legislative elections were held in Russia from September 17 to 19. This year, indoor and outdoor voting stations were located across the country, with ballot boxes set up at parks, fields, and sidewalks. At the same time, voters in several Russian regions were able to vote online. The latest data showed the turnout in the remote electronic voting stood at 93.21 percent.

United Russia has been the ruling political party of Russia since the early years of Vladimir Putin’s presidency. This year, the party saw a weaker result than at the previous parliamentary election in 2016, when it won more than 54 percent of the vote. In 2018, the party faced a slump in its popularity after voting for pension reform, which caused discontent among citizens.

Meanwhile, some officials in Europe criticized the Russian authorities and their behavior ahead and during the elections, claiming that the Kremlin had carefully manipulated the process from the beginning, with the non-parliamentary opposition mostly barred from running. The election lacked significant opposition presence after authorities declared organizations linked to imprisoned opposition politician Alexei Navalny, Kremlin’s most vocal critic and activist, to be “extremist.”

Although voter fraud has been a source of concern for opposition members and independent observers, Ella Pamfilova, who heads the CEC, said that the election went better than the commission had expected. Pamfilova revealed that officials had counted a total of 12 cases of ballot stuffing across eight districts.

Pamfilova also accused the US and Germany of being behind cyberattacks on the online voting system during the three-day elections. However, cyberattacks from overseas could not impede the work of the electronic voting system as specialists from the Moscow-based Department of Information Technologies have successfully repelled them.

“We are ready to provide all the available data to the German side if there is such an interest,” Zakharova said on Tuesday at a briefing.

“I think, after the data we have announced, such interest should appear. [...] We have a special channel for issues related to global cybersecurity. We will be ready to respond to Germany’s requests.”