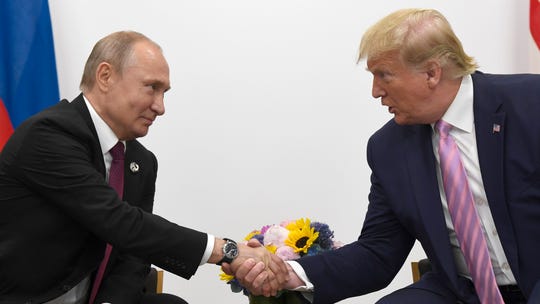 American President Donald Trump (on the right) shakes hands with Russian President Vladimir Putin (on the left) on Friday during a meeting on the sidelines of the G20 summit in Osaka, Japan. / Susan Walsh / AP

The leaders of the world’s two biggest nuclear powers held a closed-door meeting on the sidelines of the Group of 20 summit, better known as the “G20,” in Osaka, Japan on Friday to discuss how the two countries might avoid a new arms race amidst a deterioration in diplomatic relations.

Following the meeting between U.S. President Donald Trump and Russia’s President Vladimir Putin, who last met in Helsinki nearly one year ago, the White House released a statement.

“The presidents agreed the two countries will continue the discussion on a 21st century model of arms control, which President Trump stated as needing to include China,” the statement read according to Bloomberg.

What is already soured relations between the former Cold War foes have only been aggravated with heightened pressure coming from Washington and its withdrawal from the Intermediate-Range Nuclear Forces Treaty (INF), a Cold War-era agreement that safeguarded against nuclear war between the Soviet Union and the United States. After the U.S. pulled out of the INF earlier this year, Russia suspended its compliance, too, blaming Washington for the breakdown. Washington’s reasons for pulling out include that China, now a formidable nuclear weapons state, was never a party to the treaty and could be outpacing the U.S., as well as Russia, in its production capabilities.

In an interview with the Financial Times, Putin voiced his concerns that the U.S. might suspend its participation in the New Strategic Arms Reduction Treaty known as “New START” – a nuclear weapons agreement that caps the number of nuclear warheads Russia and the U.S. may hold. Putin is of the opinion that if the U.S. suspends New START, the world will lose the last tool in arms control.

“We said that we are ready to hold talks and to extend this treaty between the U.S. and Russia, but we have not seen any relevant initiative from our American partners,” TASS quoted Putin as saying. “They keep silent, while the treaty expires in 2021. If we do not begin talks now, it would be over because there would be no time even for formalities.”

Vladimir Dzhabarov, a deputy within Russia’s Federation Council Committee on Foreign Affairs, says that Russian and American experts may soon be instructed by their respective governments to develop a new strategic arms reduction treaty.

“It can be expected that experts will receive a signal to prepare or extend the contract, or its new version,” RIA Novosti quoted Dzhabarov as saying following the Putin-Trump meeting.

New START was signed between former U.S. President Barack Obama and his Russian counterpart Dmitry Medvedev in 2010, replacing a Soviet-era agreement that was known as START I and signed in July 1991, shortly before the USSR had officially collapsed. New START was considered the last major milestone in arms control that would limit Russia and the U.S. from deploying no more than 1,550 deployed nuclear warheads and 700 deployed missiles and bombers. New START is scheduled to expire on February 5, 2021.