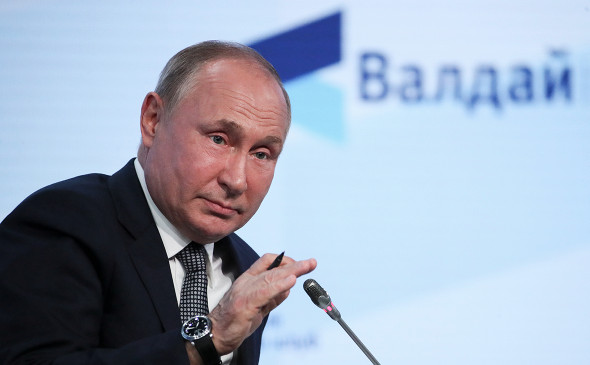 Commenting on Austin's remarks, Putin went on to say that they are practically opening the doors to NATO for Ukraine. / Dmitry Feoktistov / TASS

In his address to the plenary session of the 18th annual meeting of the Valdai Discussion Club in Sochi on Thursday, President Putin claimed that Kyiv's "formal membership in NATO may not take place, but military development of the territory is already underway. "

"This really creates a threat to the Russian Federation, we are aware of this," TASS quoted Putin as saying in response to a question about the deployment of NATO’s military infrastructure in Ukraine.

The remarks came two days after the United States Defense Secretary Lloyd Austin voiced Washington's support for Ukraine's aspiration to join the trans-Atlantic alliance, adding that no third country could veto NATO’s membership decisions. During his brief visit to Kyiv, Austin said that Ukraine had "the right to decide its own future foreign policy," which it should do "without any outside interference."

Commenting on Austin's remarks, Putin went on to say that they are practically opening the doors to NATO for Ukraine.

"In fact, his statements should and can be interpreted exactly this way," Putin said.

The Kremlin has long opposed Ukraine's bid to join NATO, arguing that it would only exacerbate the situation. Russia has long criticized the deployment of NATO troops to Eastern Europe, up to Russia’s borders, which threatens its stability and may force Moscow to take extra measures to ensure its security.

Ukraine has been trying to join the western military block in hopes of gaining protection against what Kyiv calls to be Russian aggression. In June, Ukrainian President Volodymyr Zelensky urged NATO members to speed up the country's entry into the alliance after a massive buildup of Russian troops near Ukraine’s border. Russia did not deny the troop movements but insisted that Moscow had no intentions of threatening Ukraine. For two weeks, more than 10,000 servicemen, 1,200 units of equipment, as well as 40 warships were positioned in Crimea, in what Russia said was a part of a snap training exercise.

The Ukrainian authorities expect the country to join the military alliance by 2030.

Although two former Soviet republics had deep cultural, economic and political bonds, Kyiv and Moscow have been at odds since the 2014 crisis in Ukraine’s southern and eastern regions. Ukraine accuses Russia of annexing the Crimean Peninsula that extends into the Black Sea. The Moscow-backed referendum held in March that year reportedly revealed that over 90 percent of Crimea’s residents wanted the peninsula to be under Russian control. However, the vote was declared illegitimate by Ukraine, Western countries and the United Nations.

The simmering seven-year conflict in eastern Ukraine has so far claimed the lives of some 14,000 people and left as many as 40,000 wounded, according to Kyiv’s estimates.

Meanwhile, tensions between Russia and the US-led alliance have grown in the past few months. This week Moscow announced its decision to suspend its diplomatic mission to NATO in retaliation for the expulsion of eight Russian diplomats from the alliance’s Brussels headquarters for the alleged spying. In addition, the US-led military alliance halved the size of Russia's team at its headquarters from 20 to 10.