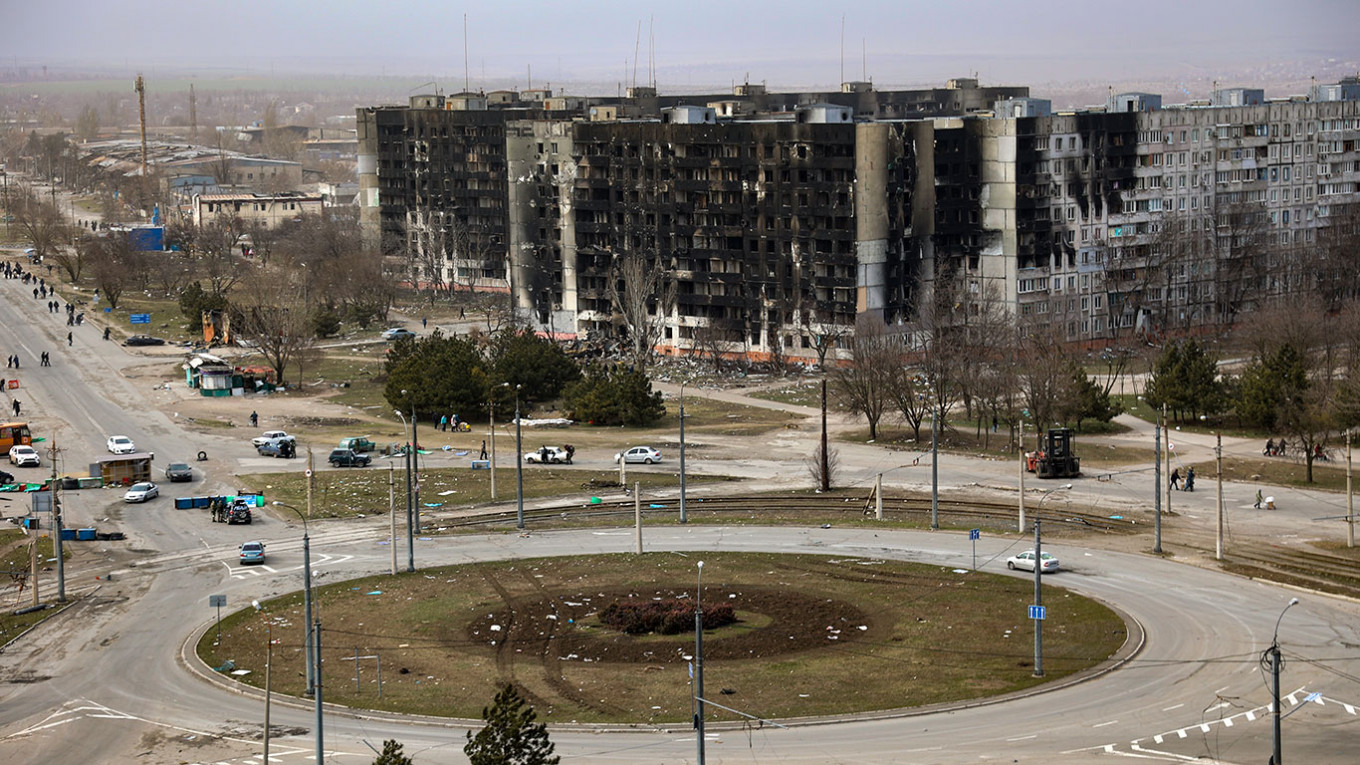 Russian troops have besieged Mariupol since the early days of an all-out offensive in Ukraine that began on February 24. / Alexei Alexandrov / AP Photo

Russian President Vladimir Putin claimed victory in Mariupol on Thursday, publicly calling off an assault on the Azovstal iron and steelworks — the final Ukrainian stronghold in the devastated city.

In a televised meeting at the Kremlin, President Putin ordered Defense Minister Sergei Shoigu not to storm the fortress-like steel complex filled with industrial warehouses, rail tracks, and underground tunnels, where nearly 2,000 Ukrainian fighters and around 1,000 civilians are holed up.

“I consider the proposed storming of the steel plant inexpedient. I order you to cancel it,” TASS quoted Russia’s president as saying on Thursday.

“There is no reason to penetrate through these subterranean pathways and beneath these industrial facilities,” he stressed, calling instead for Russian troops to blockade the area “so that a fly can’t get through.”

The Soviet-era Azovstal plant in the southeast of Mariupol is a major industrial complex with a labyrinth of tunnels and bunkers spreading out across about 11 square kilometers (4 square miles). The plant shelters thousands of Ukrainian troops and civilians, including women and children.

Putin’s order came after the Russian defense minister presented a report portraying the mission to take the Ukrainian port city as a success and claimed that the city had been “liberated.”

Meanwhile, despite Moscow’s statements about the cessation of the Azovstal assault, some Ukrainian sources reported that the Russian military continued to shell the plant.

Shortly after President Putin’s order, Advisor to the Mayor of Mariupol, Petr Andryushchenko, wrote on his Telegram channel that the bombing and shelling of the plant’s territory were underway.

“I am sure that the invaders will not stop until the complete destruction of everyone inside Azovstal,” Andryushchenko wrote.

The port city of Mariupol holds significant strategic value for the Kremlin as it forms a land bridge to the annexed Crimea peninsula.

The city on the Sea of Azov, which had 430,000 inhabitants before the invasion, has withstood nearly two months of Russian bombardments. It is estimated that around 100,000 civilians are trapped in the city without much food or aid.

Russian troops have besieged the southeastern city since the early days of an all-out offensive in Ukraine that began on February 24. Since the first day, the Kremlin has been claiming that the “military operation” in Ukraine was aimed to protect the people of the separatist-controlled regions, namely Donetsk and Lugansk, allegedly being attacked by the Ukrainian military. The Kremlin explained that the decision was made after separatist leaders of the so-called republics had asked Moscow for military support. In his televised address, President Putin told foreign countries not to interfere, saying it could lead to “consequences they have never seen.”

More than five million people have fled Ukraine in less than two months.

According to the data compiled by the Office of the UN High Commissioner for Human Rights (OHCHR), at least 2,345 Ukrainian civilians, including 70 children, were killed and 2,919 wounded in the ongoing hostilities. Ukraine’s Ministry of Foreign Affairs said Saturday that approximately 20,100 Russian troops had been killed. Russia refrains from regularly publicly disclosing its casualty numbers.