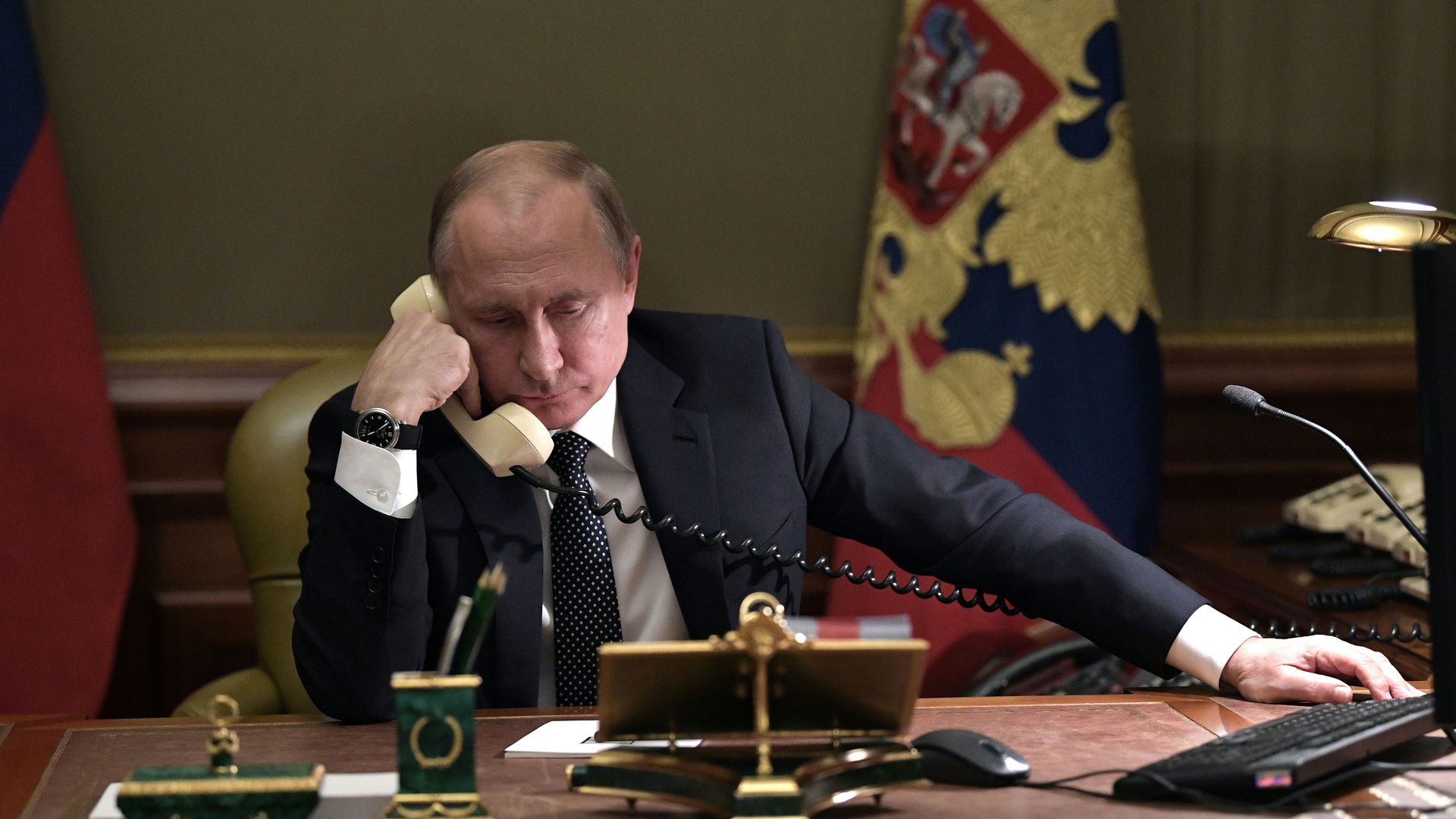 The call between the two leaders came amid West’s warnings about a possible Russian invasion of Ukraine. / Alexey Nikolsky / AFP/Getty

Russian President Vladimir Putin and his American counterpart Joe Biden held a telephone call on Saturday in the hope of achieving progress towards cooling down the tensions over Ukraine.

However, the hour-long conversation did not seem to help break the tense dynamics developing between Russia and the West for several weeks.

A statement issued by the White House on February 12 reads that during the call, President Biden made clear that if Russia undertakes a further invasion of Ukraine, the US and allies “will respond decisively and impose swift and severe costs on Russia.” Biden went on further to say that although Washington was “prepared to engage in diplomacy,” the US and allies “are equally prepared for other scenarios.”

In turn, President Putin called out the West for its failure to make Kyiv implement its obligations under the Minsk agreements aimed at ending the war in eastern Ukraine.

During a briefing with reporters on Saturday, Kremlin foreign policy aide Yury Ushakov said that during the call, Vladimir Putin “thoroughly described the Ukrainian authorities’ destructive policy aimed at sabotaging the Minsk agreements.”

According to Ushakov, the head of Russia also stressed that “it was dangerous to militarize Ukraine and pump it with advanced weapons, which is what Western countries are doing.”

“Given Ukraine’s doctrine, which is openly aimed at bringing Crimea back by force, its [Ukraine’s] potential accession to NATO is fraught with the most dangerous consequences, including a direct military standoff between Russia and the alliance, particularly because the US views Article 5 of the Washington Treaty as a sacred one,” Ushakov said, referring to the key section of the North Atlantic Treaty, under which each NATO member state considers an armed attack against one member state as an armed attack against them all.

The call between the two leaders came amid West’s warnings about a possible Russian invasion of Ukraine. The US, the UK, Germany, and Australia have already ordered the evacuation of most of its embassy staff out of Ukraine on Saturday. At the same time, New Zealand, Canada, Finland, Estonia, Japan, and the Netherlands urged their citizens to leave the country.

Ahead of the talks with Biden, Putin held a separate conversation with his French counterpart Emmanuel Macron. According to the Kremlin, the dialogue between the two leaders focused on prospects for reducing tensions around Ukraine.

Tensions between Russia and the West have soared in recent weeks amid regular statements coming from western officials who accused Russia of plotting an invasion of its neighbor and building up troops along the Ukrainian border. Moscow had repeatedly claimed that it was free to move its forces within its borders and had no plans to attack its neighbor.

Amid mounting tensions, the US has bolstered its military presence in Europe to reassure allies on NATO’s eastern flank. Washington also said it was planning to send additional 3,000 troops to Poland, Ukraine’s western neighbor. Some 8,500 are already on alert for deployment to Europe. Although the White House assured the US military would not enter a war in Ukraine, President Biden promised to impose severe economic sanctions against Moscow.

Kyiv has long been trying to join NATO to get protection against what it describes as Russian aggression. The Kremlin, however, has repeatedly claimed that Ukrainian membership in the military alliance would be dangerous for Russia.

Being concerned over NATO’s expansion along its borders, Russia seeks legally binding security guarantees excluding any further NATO expansion eastward and deployment of its weapon systems in close vicinity to Russian territory. However, the US and NATO formally rejected Russia’s demands for security guarantees, though Washington outlined areas where discussions are possible.