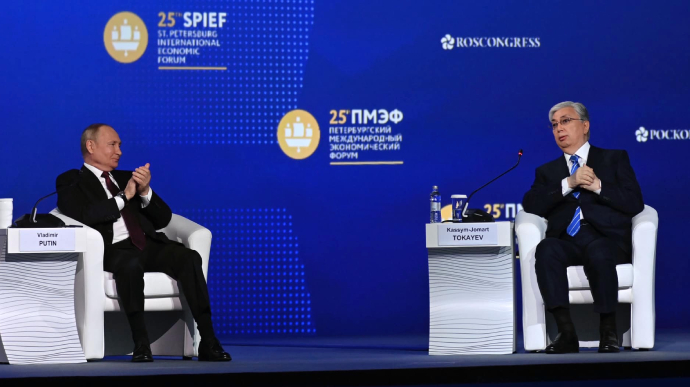 President Tokayev believes that if the right to self-determination is put into practice worldwide, then there will be over 600 countries instead of the 193 states which are currently members of the United Nations.

President Kassym-Jomart Tokayev has made it clear that Kazakhstan has no intentions to recognize the independence of the so-called Donetsk and Lugansk People’s Republics.

At the plenary session of the 25th St. Petersburg International Economic Forum (SPIEF) on Friday, Tokayev answered the question regarding Kazakhstan’s attitude to what Russia describes as a “special military operation” in Ukraine.

“Two UN principles, however, have come into contradiction – the territorial integrity of the state and the right of a nation to self-determination. Since these principles contradict each other, there are different interpretations of them,” he explained.

President Tokayev believes that if the right to self-determination is put into practice worldwide, then there will be over 600 countries instead of the 193 states which are currently members of the United Nations.

“For this reason, we do not recognize either Taiwan, or Kosovo, or South Ossetia, or Abkhazia. Apparently, this principle will also be applied to quasi-state territories, which, in our opinion, are Lugansk and Donetsk,” Kazakhstan’s president said, sitting next to his Russian counterpart Vladimir Putin, who recognized the two eastern regions of Ukraine as independent entities.

Separatist forces in the Donetsk and Lugansk regions – collectively known as Donbas – broke away from Ukrainian government control in 2014 and proclaimed themselves independent “people’s republics.” The Kremlin has been repeatedly accused of supporting the separatist regimes in these territories with weapons and troops. On February 22, 2022, Putin signed decrees recognizing Donetsk and Lugansk as independent entities. Two days later, Moscow launched a “special military operation” in Ukraine, claiming that it aimed to protect the people of these territories allegedly being attacked by the Ukrainian military.

Even though Kazakhstan is a close ally of Moscow, President Tokayev has not backed the ongoing war in Ukraine. In an interview with Rossiya 24 TV channel in mid-June, he said that Kazakhstan would not assist Russia in circumventing sanctions, prompting aggressive rhetoric by certain Russian politicians.

In his response to the plenary session, the Kazakhstani president also condemned some statements of Russian parliamentarians about the situation in Kazakhstan, which he believes are “absolutely incorrect statements.”

President Tokayev has also refused to accept the Order of Alexander Nevsky, which was most likely supposed to be awarded to Tokayev on Friday. According to a statement issued by the Kazakh leader’s press office, the president has made a decision not to accept any such honors while in office. He has already refused to accept an order from the government of Kyrgyzstan for the same reasons.

The Order of Alexander Nevsky is awarded to Russian citizens who have served in civil service positions for at least 20 years and have made a meritorious contribution to Russia. It can also be awarded to prominent politicians, public figures, or businesspeople from abroad.

Meanwhile, increasingly tense relations between Russia and the West over the war in Ukraine have not stopped businesspeople and officials from around the world from attending the St. Petersburg International Economic Forum last week, which reportedly resulted in more than $76 billion in deals.

The four-day forum brought more than 13,500 participants from 141 countries together to seek ways to improve and expand multilateral trade and economic cooperation and discuss current geopolitical issues.