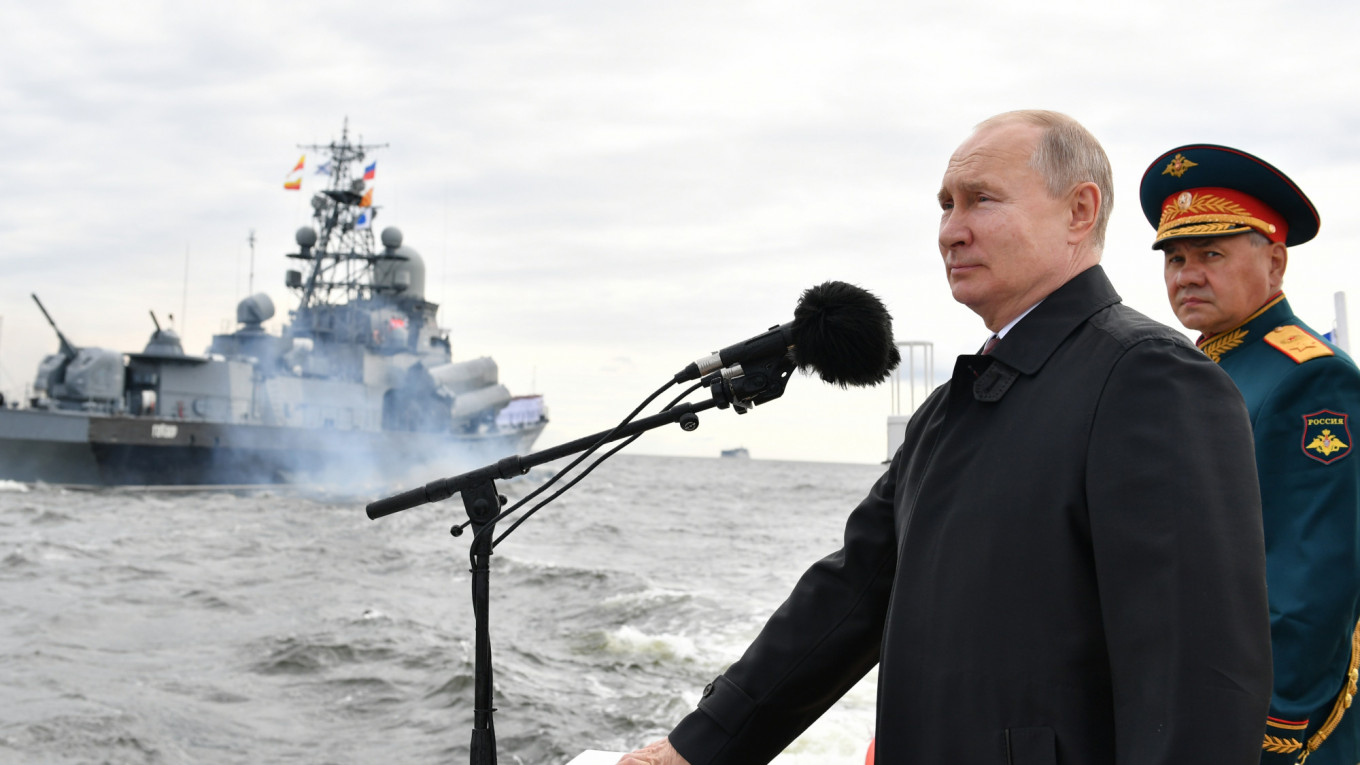 It has been weeks since a British warship displeased Moscow by sailing in an area near Crimea that Russia claims as its territorial waters, but the Kremlin still remembers the accident.

In his speech at a navy day parade in St. Petersburg, Russian President Vladimir Putin has said the Russian Navy could detect any enemy and launch an “unpreventable strike” if needed.

“Today, the Russian Navy has everything it needs to secure the defense of our native country and our national interests,” Interfax quoted President Putin as saying on Sunday.

“We are capable of detecting any submarine, surface, or airborne adversary and dealing them an imminent strike if necessary,” he added.

President Putin’s warning comes amid tensions between London and Moscow after the British destroyer HMS Defender had entered three kilometers into territorial waters in the region of Cape Fiolent off the coast of Crimea. Moscow claimed that a Russian border patrol warship fired warning shots to push the British destroyer back. After the incident, the UK dismissed that assertion, saying that Russia was conducting a routine “gunnery exercise.” London also stated that HMS Defender was sailing in Ukrainian waters.

Located on the northern coast of the Black Sea, Crimea has become a bone of contention between Kyiv and Moscow since the 2014 crisis in Ukraine, followed by Russia’s takeover of the peninsula. The Moscow-backed referendum held in March that year reportedly revealed that over 90 percent of Crimea’s residents wanted the peninsula to be under Russian control. However, the vote was declared illegitimate by Ukraine, Western countries, and the United Nations.

Russia has repeatedly voiced concerns over the expansion of NATO’s presence along its borders, including in the Black Sea. For Russia, the Black Sea is of particular importance for economic and geostrategic reasons. As the country’s only warm water ports, the seaports located there have always served Russia’s economic interests. The control of the Black Sea also means total control over the Sea of Azov - a small body of water surrounded by Russia and Ukraine connected to the Black Sea by the Kerch Strait.

Meanwhile, President Putin praised Russia’s rapid rise to naval power in his speech on Sunday. According to the president, the country now possesses “the latest hypersonic precision weapons systems, that have no equivalent in the world, and which we constantly and successfully improve.”

“Russia has ensured its naval presence in almost all regions of the World Ocean, and the faithful successors to the marine combat glory of our Fatherland keep watch in the northern and southern latitudes,” he stressed.

Russia’s Main Naval Parade in St. Petersburg featured more than 50 vessels of all classes ranging from missile cruisers to strategic nuclear submarines. Along with destroyers, submarines, and assault vessels, an advanced version of the Russian nuclear-powered ballistic missile submarine, known as Knyaz Vladimir, was on display for the first time.

Knyaz Vladimir is being hailed as one of Russia’s most powerful Borei-A class strategic missile-carrying underwater cruisers, which can carry up to 20 Bulava (RSM-56) intercontinental ballistic missiles. Other versions of the Borei class submarines could carry only up to 16 missiles. The new version can launch 96-200 hypersonic, independently maneuverable warheads, producing 100-150 kilotons each.

Russia’s Navy currently includes 68 submarines, 20 of which are diesel-powered and the remaining 48 being nuclear-powered, according to Mil.Press Flot. In addition, the country’s Navy maintains 33 large surface warships, more than 100 small surface combat ships and boats, roughly 60 minesweepers, 21 amphibious ships, and two training ships.