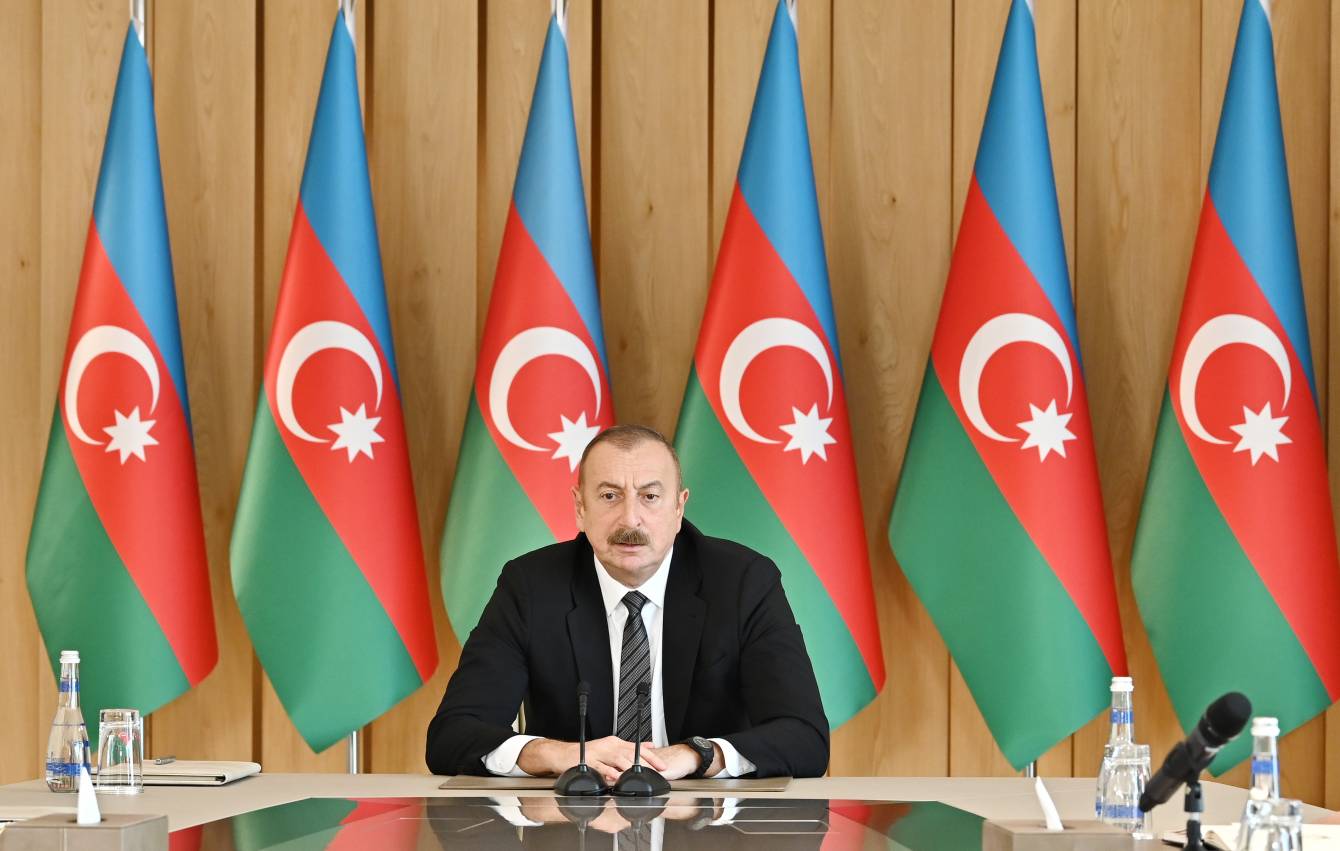 President Ilham Aliyev convened a government meeting to discuss the results of the first quarter of 2022, April 12, 2022 / President.Az

Azerbaijani President Ilham Aliyev has called on foreign players to stop arming Armenia. In remarks at a government meeting on Tuesday, President Aliyev said Armenia is being supplied with weapons from abroad and could not afford to purchase such weapons.

“In the second Karabakh war, we destroyed Armenia's military equipment worth about 4-5 billion dollars. Some of this equipment was taken as spoils of war, and we are using it. Some of it is displayed in the Military Trophies Park,” President Aliyev said, according to a statement posted on the president’s official website.

“The question is: where does so much money come from in a poor country? Where do these loans come from? Were these loans then repaid or written off? If those loans had not been given to them, I am sure there would have been no need for the second Karabakh war.”

President Aliyev added that financial allocations aimed at the militarization of Armenia would be considered an unfriendly move against Azerbaijan and prompt an adequate response from Baku. He vowed to invest in national army-building projects as much money as needed.

Armenia and Azerbaijan have long been at odds over the latter’s Karabakh (Garabagh) region. Following the Soviet Union’s dissolution in 1991, Armenia launched a military campaign against Azerbaijan that lasted until a ceasefire deal was reached in 1994. As a result, Armenia occupied 20 percent of Azerbaijan’s internationally recognized territories. Over 30,000 ethnic Azerbaijanis were killed, and one million were expelled from those lands in a brutal ethnic cleansing campaign carried out by Armenia.

On September 27, 2020, the decades-old conflict between the two countries spiraled after Armenia’s forces deployed in occupied Azerbaijani lands shelled military positions and civilian settlements of Azerbaijan. During counter-attack operations, Azerbaijani forces liberated over 300 settlements, including the cities of Jabrayil, Fuzuli, Zangilan, Gubadli, and Shusha, from a nearly 30-year-long illegal Armenian occupation. The war ended in a tripartite statement signed on November 10, 2020, by Armenia, Azerbaijan, and Russia. Under the statement, Armenia returned the occupied Aghdam, Kalbajar, and Lachin districts to Azerbaijan.

Around $5 billion worth of Armenian military equipment, including those demonstrated in Baku at the post-war Victory Parade, was destroyed, captured, or found abandoned by the Azerbaijani forces during the war. The solemn parade showcased tens of Armenia’s military hardware and equipment including fully operational D-20 and D-30 howitzers, various anti-aircraft installations, OSA-1T and KUB short-range air defense systems, anti-aircraft guns, T-72 tanks, and other military equipment. In addition, destroyed and unusable military equipment that once belonged to the Armenian Armed Forces was showcased at the parade.

According to data released by the Stockholm Peace Research Institute (SIPRI), Russia was the largest supplier of arms to Armenia between 2011 to 2020. Its share in Armenia’s arms imports accounted for 94 percent over the same period.

The military deliveries from Russia included mainly armored personnel carriers, air defense systems, multiple rocket launchers, tanks, as well Iskander surface-to-surface missiles, Smerch rockets, and Su-30SM combat aircraft — all of which have been deployed against Azerbaijan in the 44-day war in 2020.

The cost of arms purchases of Armenia from Russia during this 10-year period stood at $5 billion. Moscow also periodically allocated new loans to Yerevan to help it pay off its debts. One of the latest financial allocations of Russia was a $200 million loan for the purchase of weapons under an agreement ratified by the parties in 2015. Deliveries under this contract were made in 2018.

Russia has been co-chair to OSCE Minsk Group alongside the US and France for mediating negotiations between Armenia and Azerbaijan. The mandate of a co-chair of the Group requires a neutral position on the conflict.

However, Russian Foreign Minister Sergei Lavrov reportedly said in a recent meeting with his Armenian counterpart Ararat Mirzoyan that Russia would continue to help Armenia strengthen its defense capabilities.