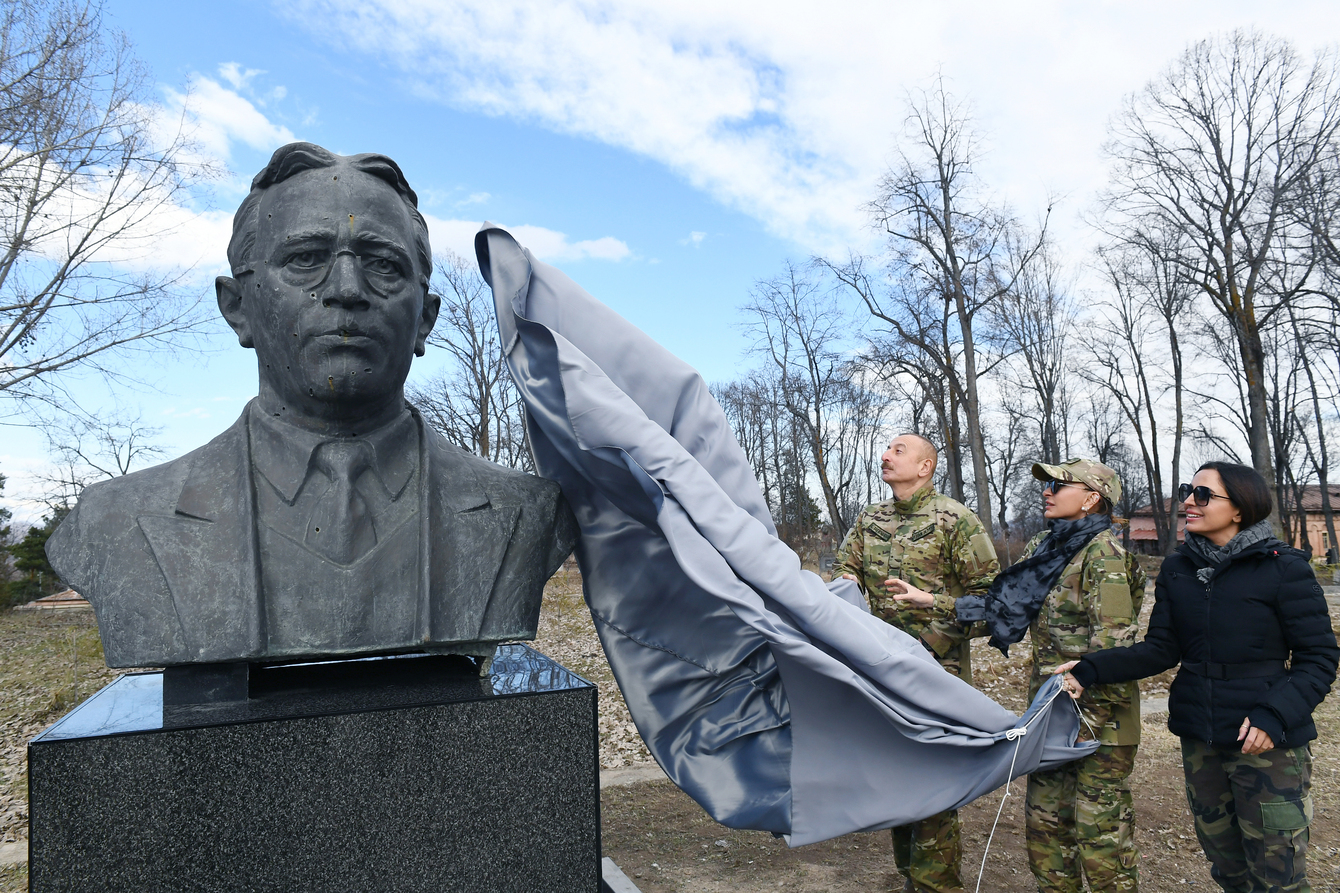 President Ilham Aliyev and his family members unveil the monument of great Azerbaijani composer Uzeyir Hajibeyli in Shusha, Azerbaijan. The monument was brought back to the Azerbaijani city after the end of Armenia's nearly 30-year-long occupation, January 15, 2021 / President.Az

Azerbaijani President Ilham Aliyev on Thursday visited the recently liberated territories of Azerbaijan where he broke ground for new infrastructure projects and brought back monuments of famous Azerbaijanis to their hometown after nearly 30 years.

The president's first stop was in Fuzuli district, which was freed from Armenia's occupation throughout the counter-attack operations, codenamed "Iron Fist," on October 17. The president laid foundation stone for Fuzuli-Shusha highway and Fuzuli airport in the Fuzuli district. The highway will enable a shorter and faster connection between the two locations. When completed, the airport will be the second of its kind in the Karabakh region of Azerbaijan after the Khojaly airport which is out of operation for almost 30 years following Armenia's occupation of Azerbaijani lands.

"It is an essential project for the development of our liberated regions. The Fuzuli International Airport is to be commissioned this year. At least the runway should be commissioned in 2021. The airport building may be commissioned this year or next year. This airport's primary purpose will be to cater to the needs of foreign visitors arriving in Shusha. The distance from here to Shusha is not long," the president said, according to his official website President.Az.

The airport's runway, spanning 2,800 meters in length, will receive both international and domestic flights. Fuzuli is located 60 kilometers southeast of Shusha. Both Fuzuli and Shusha remained under Armenia's occupation for nearly three decades since the early 1990s when Armenia and Azerbaijan fought a lengthy war in the latter's Karabakh region. Following the Soviet Union’s dissolution in 1991, Armenia kicked off a full-blown military aggression against Azerbaijan. The bloody war until a ceasefire in 1994 saw Armenia occupying 20 percent of Azerbaijan’s internationally recognized territories – the Nagorno-Karabakh (Daghlig Garabagh) region, including the city of Shusha on May 8 in 1992, and seven surrounding districts, including Fuzuli on August 23 in 1993. Over 30,000 ethnic Azerbaijanis were killed and one million were expelled from those lands in a brutal ethnic cleansing policy conducted by Armenia.

President Aliyev said the establishment of a new highway and an air harbor in Fuzuli is part of the "grand return" of Azerbaijanis to the Karabakh region. The president announced that another international airport will be built in either liberated Kalbajar or Lachin district. Both Kalbajar and Lachin districts have been returned to Azerbaijan based on the tripartite ceasefire statement signed by Armenia, Azerbaijan and Russia on November 9.

"I have come as the Commander-in-Chief of the Army that broke the enemy's back, and I state it here under the sacred flag and before the heroic servicemen that we will live in these lands forever! We will restore Shusha and all other destroyed cities and villages. We will restore all our destroyed historical sites."

Shusha is one of five cities liberated from Armenia's occupation by the Azerbaijani army during the 44-day-long counter-offensive operations from September 27 through November 9. The Azerbaijani army restored Azerbaijan's sovereignty over the city on November 8. The liberation of Shusha has played a crucial role in the retreat of Armenia's forces and cessation of hostilities in a ceasefire on November 10.

For Azerbaijanis, Shusha is the temple of Azerbaijani culture and music. Shusha is home to one of the leading schools of mugham, the traditional Azerbaijani genre of vocal and instrumental arts that have influenced music throughout the Caspian and Middle East regions. The city is often referred to as "the Music Conservatory of the Caucasus" because of the many talented musicians the city has produced throughout its history, such as the founding father of Azerbaijani composed classical music and opera, Uzeyir Hajibeyli, world-famous Azerbaijani poet Molla Panah Vagif and poetess Khurshudbanu Natavan and famous Azerbaijani and Soviet opera tenor Bulbul.

Monuments of Uzeyir Hajibeyli, Khurshudbanu Natavan, and Bulbul have been returned to Shusha and unveiled by President Aliyev on Friday. The structures suffered seriously from the Armenian cultural vandalism when Shusha was occupied in 1992. They were illegally transferred to Armenia after the capture of Shusha and then were purchased by the Azerbaijani authorities, brought to Baku and placed in the courtyard of the Museum of Art.

President Aliyev said the return of the monuments to Shusha is a symbol of Azerbaijan's victory. On January 5, the president declared Shusha the capital of Azerbaijani culture. Director-General of the Islamic World Educational, Scientific and Cultural Organization (ICESCO), Salim bin Mohammed Al-Malik said the organization offered Shusha to be declared the capital of the Islamic culture, as well.