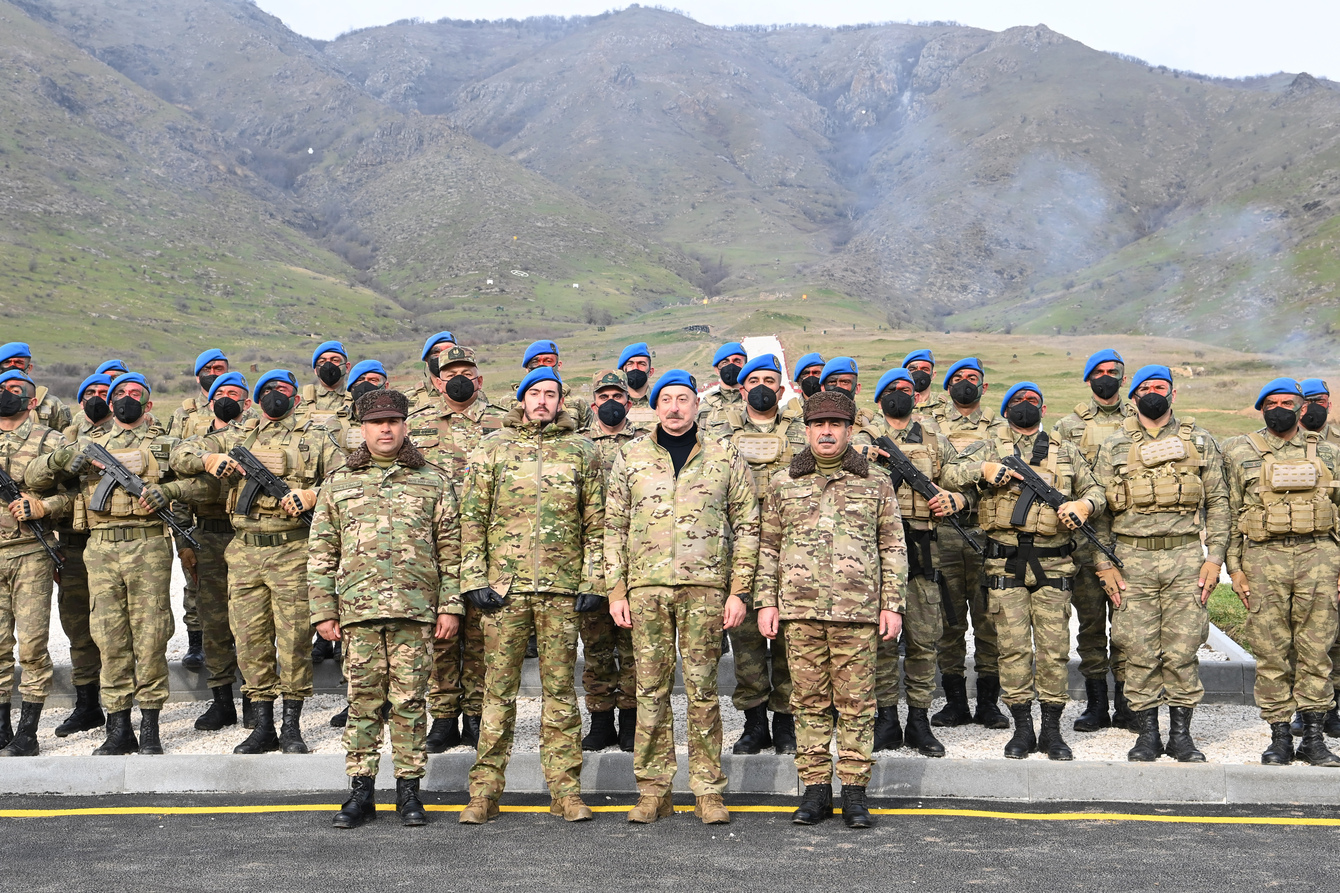 President Ilham Aliyev and his son stand for a photo with the Commando Unit personnel and top officials of the Defense Ministry in Hadrut, the Karabakh region, December 24, 2021 / President.Az

On his 60th birthday, Azerbaijan’s President Ilham Aliyev visited the country’s Karabakh region and attended the opening of a new special forces’ military unit in the Hadrut settlement of the Khojavand district.

The head of the country observed the training activities of the new Commando Unit of the Azerbaijan Armed Forces in Hadrut and handed over a battle flag to the unit’s commander.

“The opening of a new military unit in Hadrut today is a very significant event. Also because this region is of strategic importance. Our strong armed forces based in Hadrut will protect our security, the security of our country,” President Aliyev said on Friday while addressing the commando personnel.

“Not one, not two, but many commando brigades are already being established in Azerbaijan, and these brigades will be capable of performing any military task. This will greatly increase the strength of our army. I want to say again that there will be many such brigades, and thousands of our servicemen will serve in these brigades. Thus, the Azerbaijani Army will continue to maintain its professionalism and fighting spirit,” he added.

According to the president, the country’s defense budget has been increased, and the newly signed contracts are being implemented to upgrade the army’s arsenal with all-new cutting-edge military equipment and weapons.

The formation of the Commando Unit is part of the upgrade of the Azerbaijan Armed Forces in line with the Turkish military model. Before joining the army’s new “blue-beret” branch, the commando personnel have been through weeks-long “Commando preparation” courses in Turkey.

The first Commando Unit in Azerbaijan was officially inaugurated on October 19, and the second - on November 26. The commando forces held their first live-fire tactical exercises on December 4.

Azerbaijani authorities have long been working to bring the national army on a par with international military standards in terms of personnel readiness and supply of weapons and equipment. Following the last year’s 44-day war with Armenia, officials in Baku increased their interest in the Turkish army as the primary model for modernization.

According to President Ilham Aliyev, Azerbaijan intends to create “a small model of the Turkish army,” which is considered the second most powerful army in NATO. The strategic Shusha Declaration signed on June 15, 2021, ultimately focused on deeper cooperation between the two countries in the defense sector.

The 44-day war between Armenia and Azerbaijan in the latter’s Karabakh region was the most massive warfare involving the Azerbaijan Armed Forces since the First Karabakh War in the 1990s.

A decades-old conflict between Armenia and Azerbaijan over the latter’s Karabakh (Garabagh) region started with Armenia’s full-blown military aggression against Azerbaijan following the Soviet Union’s dissolution in 1991. The bloody war lasted until a ceasefire in 1994 and saw Armenia occupying 20 percent of Azerbaijan’s internationally recognized territories. Over 30,000 Azerbaijanis were killed, and one million were expelled from those lands in a brutal ethnic cleansing policy conducted by Armenia.

On September 27, 2020, the Armenia-Azerbaijan conflict took a violent turn when Armenia’s forces deployed in the occupied Azerbaijani lands shelled military positions and civilian settlements of Azerbaijan. During the counter-attack operations that lasted 44 days, Azerbaijani forces liberated over 300 settlements, including the cities of Jabrayil, Fuzuli, Zangilan, Gubadli, and Shusha, from nearly 30-year-long illegal Armenian occupation. The war ended in a tripartite statement signed on November 10 by Armenia, Azerbaijan, and Russia. Under the statement, Armenia also returned the occupied Aghdam, Kalbajar, and Lachin districts to Azerbaijan.

The control over the Hadrut settlement, where the new special forces’ military unit was inaugurated this week, was regained on October 9, 2020. The settlement had been under Armenian occupation since October 2, 1992.