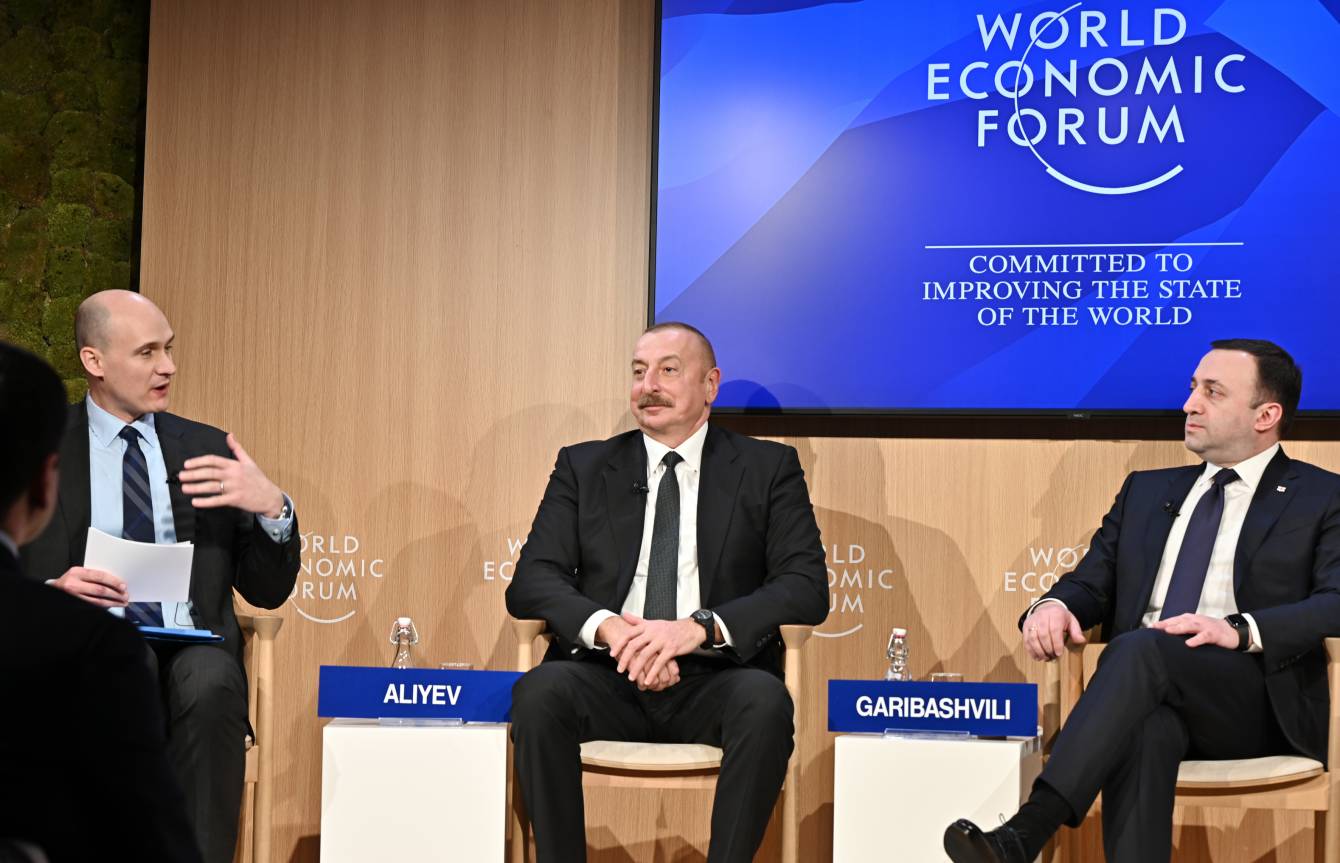 Yerevan is blocking progress towards the creation of a trilateral cooperation format in the South Caucasus involving all three countries of the region – Azerbaijan, Georgia and Armenia, Azerbaijan’s President Ilham Aliyev has said.

The president’s remarks came during a plenary meeting held as part of the World Economic Forum in Davos.

Discussions about the South Caucasus region were attended by the president of Azerbaijan, the Georgian prime minister, a representative from a Turkish private company, and a commissioner from the European Union (EU). Armenia was not represented in the meeting.

“Why is Armenia not here? Because Armenia rejected our proposal with Georgia to start a trilateral format of cooperation,” President Aliyev was quoted by his press service as saying at the “Eurasia's Middle Corridor: From Pathway to Highway" plenary meeting on Thursday.

According to him, Armenia’s lack of response to Azerbaijan’s proposal to sign a peace deal derailed all efforts on this front. The proposed deal would be simple and based on the fundamental principles of international law.

“Our suggestion was for leaders to meet in Georgia. Georgia historically has been where all the neighbors met, but Armenia was not ready for that. And this is one of the potential risks because if three countries of the Caucasus unite their efforts in energy transportation, security stability, and border delimitation, the region will be much safer,” President Aliyev noted.

For his part, Georgian Prime Minister Irakli Garibashvili said Georgia was truly a neutral, unbiased and objective mediator between Azerbaijan and Armenia.

“What President Aliyev mentioned, this is truly our interest to organize such a meeting – a trilateral meeting – because this region belongs to us – Azerbaijan, Georgia, Armenia. We can really transform it into a region of opportunities: peace, stability and prosperity,” he said.

Azerbaijan has been insisting on the signing of a peace treaty with Armenia to prevent any escalations between the two countries following the 44-day war of 2020.

In March 2022, Baku submitted a proposal containing five basic principles to Yerevan, which highlights the key issues related to the peace negotiations between the two countries, including the mutual recognition of territorial integrities and delimitation and demarcation of the state border.

In April 2022, President Ilham Aliyev met with Armenian Prime Minister Nikol Pashinyan in Brussels to discuss the implementation of the peace agenda. In the meeting hosted by the European Council President, Charles Michel, the sides agreed to set up joint working groups that should work on the issues related to the delimitation and demarcation of the Armenia-Azerbaijan borderline, a larger portion of which remained out of Azerbaijan’s control for nearly three decades due to Armenian occupation.

President Aliyev later said Armenia's authorities had accepted the principles submitted by Azerbaijan. Foreign ministers of the two countries agreed on the parameters of the participants in the Joint Border Commission in two consecutive phone conversations that followed the Brussels meeting. The border commissions from the two countries held meetings in May, August and November 2022 to negotiate the process of delimitation of the border.

The next round of meetings between the Azerbaijani and Armenian leaders occurred in Prague, the Czech Republic in October last year. The 5-hour-long discussions were also attended by the European Commission President Charles Michel and French President Emmanuel Macron. Revitalizing peace negotiations between the two South Caucasus nations, which had been locked in a decades-long conflict, was the focus of the meeting. Armenia and Azerbaijan confirmed their commitment to the Charter of the United Nations and the Alma Ata 1991 Declaration through which both recognized each other’s territorial integrity and sovereignty.

Baku-based political analyst Elkhan Shahinoglu says Nikol Pashinyan wants France, which is not involved in the region, to be a mediator in normalization with Azerbaijan, but he does not accept the mediation of Georgia, which has a partnership relationship with both Azerbaijan and Armenia.

“There are two reasons why Pashinyan was not in the Davos meeting. First of all, Georgia also approaches the resolution of issues like Azerbaijan from the principle of territorial integrity, because it has a similar problem. Secondly, Georgia and Azerbaijan combine various regional projects, but there is no common project with Armenia,” Shahinoglu told Caspian News.

“In this case, Pashinyan thinks that, if he agrees to Georgia's mediation, Tbilisi will support Azerbaijan's position unwittingly. But if Pashinyan talks about peace, one of the ways of this are through the creation of a common South Caucasus house, and if the support for Armenian separatism will continue, neither there will be a common house, nor a comfortable life for Armenia.”

Meanwhile, Azerbaijan's foreign minister sought to continue the discussions started at the Prague meeting in Moscow in December 2022. However, Armenia’s foreign minister refused to attend the meeting, where the issues pertaining to the preparation of a peace treaty were to be discussed.

Azerbaijan’s Foreign Minister Jeyhun Bayramov said Armenia put the negotiation process at a stalemate with such irresponsible and inconsistent decisions.

“At the same time, we have seen other clear examples of the manipulation policy of the Armenian side in recent days. Although the Armenian side refuses the negotiation process and avoids participation in the negotiations, it only makes calls, as if the Azerbaijani side is responsible for it [stalled peace talks],” Bayramov told local media on Friday. “This is a completely wrong approach. Its main purpose is to distract and confuse the international community.”

Armenia’s Foreign Minister Mirzoyan has recently blamed Azerbaijan for “disrupting” negotiations for normalization. Mirzoyan also called the separatists in Azerbaijan’s Karabakh region “the authorities of Nagorno-Karabakh”, which contradicted the mutual recognition of territorial integrities and PM Pashinyan’s personal remarks that Karabakh is an internationally recognized territory of Azerbaijan.

The Foreign Ministry of Azerbaijan responded on Saturday to Armenia’s foreign minister accusing him of making hypocritical and ludicrous statements.

“Armenian Foreign Minister should clarify where the first proposal for the preparation of the peace treaty came from, who presented the basic principles for the first time, and who provided the first draft of the elements of the peace treaty at the Geneva meeting [October 2, 2022], as well as the issue of how long it took for both Azerbaijan and Armenia to comment on each proposal,” the ministry said in a statement.

“It is well-known to Foreign Minister Mirzoyan how the planned meeting in Tbilisi between the leaders of Azerbaijan and Armenia was obstructed by all efforts, and that Armenia since the beginning of December has not yet responded to the proposals to the draft statement of such a possible meeting, presented by Azerbaijan as a sign of constructive approach,” the ministry added, calling on Yerevan to declare whether it is ready for a meeting.