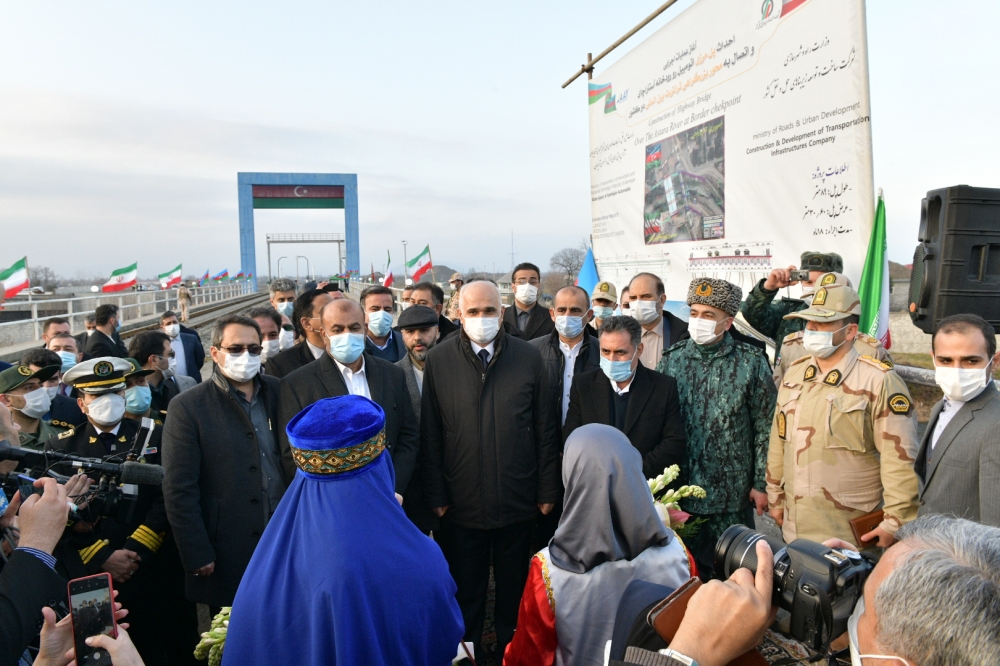 On January 25, 2022, delegations led by Azerbaijan’s Deputy Prime Minister Shahin Mustafayev and Minister of Roads and Urban Development of Iran Rostam Ghasemi attended a groundbreaking ceremony, for a highway bridge, which will be built over the Astarachay River on the border of the two countries. / Azertag

Azerbaijani President Ilham Aliyev has said that his meeting with the Iranian president in November 2021 opened “a new page” in the relations between the countries and expressed hope that Iranian companies would take part in the reconstruction works in Azerbaijan’s liberated lands.

The statements were made on January 25 as part of an online meeting with Iran’s Roads and Urban Development Minister Rostam Ghasemi, who is on a visit to Azerbaijan.

“My meeting with the President of the Islamic Republic of Iran in late November was very successful and meaningful. It opens new opportunities for Iran-Azerbaijan relations. This means the opening of a new page in our relations, a page of friendship and brotherhood,” President Aliyev said.

While referring to the Iranian delegation’s visit to Azerbaijan’s liberated territories on January 24, President Aliyev noted that the visitors had an opportunity to see the devastation there with their own eyes. He also expressed confidence that Iran’s companies will soon begin to work actively in liberated lands.

“During the occupation, Armenia destroyed all our cities and villages. Therefore, construction work has now begun across this vast area – more than 10,000 square kilometers. [...] As I said, I hope that Iranian companies will take an active part in this work,” the Azerbaijani president said as part of the meeting.

According to him, Azerbaijan’s economy ministry has already been given relevant instructions. At the same time, preliminary talks have been held with the Iranian side, and now Baku is expecting “concrete results.”

Meanwhile, the meeting also focused on the intergovernmental commission of Azerbaijan and Iran.

President Aliyev said that some of the commission’s priorities were discussed with Azerbaijan’s Deputy Prime Minister Shahin Mustafayev on January 24. The list includes the creation of the North-South transportation corridor, the construction of the Khudafarin Hydroelectric Power Stations, and the construction of a bridge over the Astarachay.

President Aliyev also touched upon the “3+3” cooperation platform introduced to establish regional cooperation. The platform, launched following the Second Karabakh War, includes Azerbaijan, Armenia, Turkey, Russia, and Iran. Azerbaijan’s president described the format as “very promising,” saying that the meetings within this platform will be held regularly in the interests of the region’s countries.

Ghasemi and his deputies arrived at Azerbaijan’s Fuzuli International airport, newly built in the liberated city of Fuzuli, on January 24. The Iranian delegation visited some ongoing construction projects in Fuzuli, Zangilan, and Horadiz.

On January 25, Ghasemi and Azerbaijan’s Deputy Prime Minister Shahin Mustafayev attended the groundbreaking ceremony for the construction of a new transit road bridge over Astarachay River on the two countries’ border near the Caspian Sea.

Mustafayev said that the bridge’s construction was important for increasing traffic along the North-South transport corridor.

“Railways are also very important for the two countries and their connection to the North-South corridor,” he added.

For his turn, Ghasemi said that “basically, this project would improve links between the two countries as well as links with countries like Russia.”

The bridge’s construction should be completed in 15 months with a credit of around $6 million. This bridge would reduce the time for goods to reach the Russian capital Moscow from the Iranian border to three days.