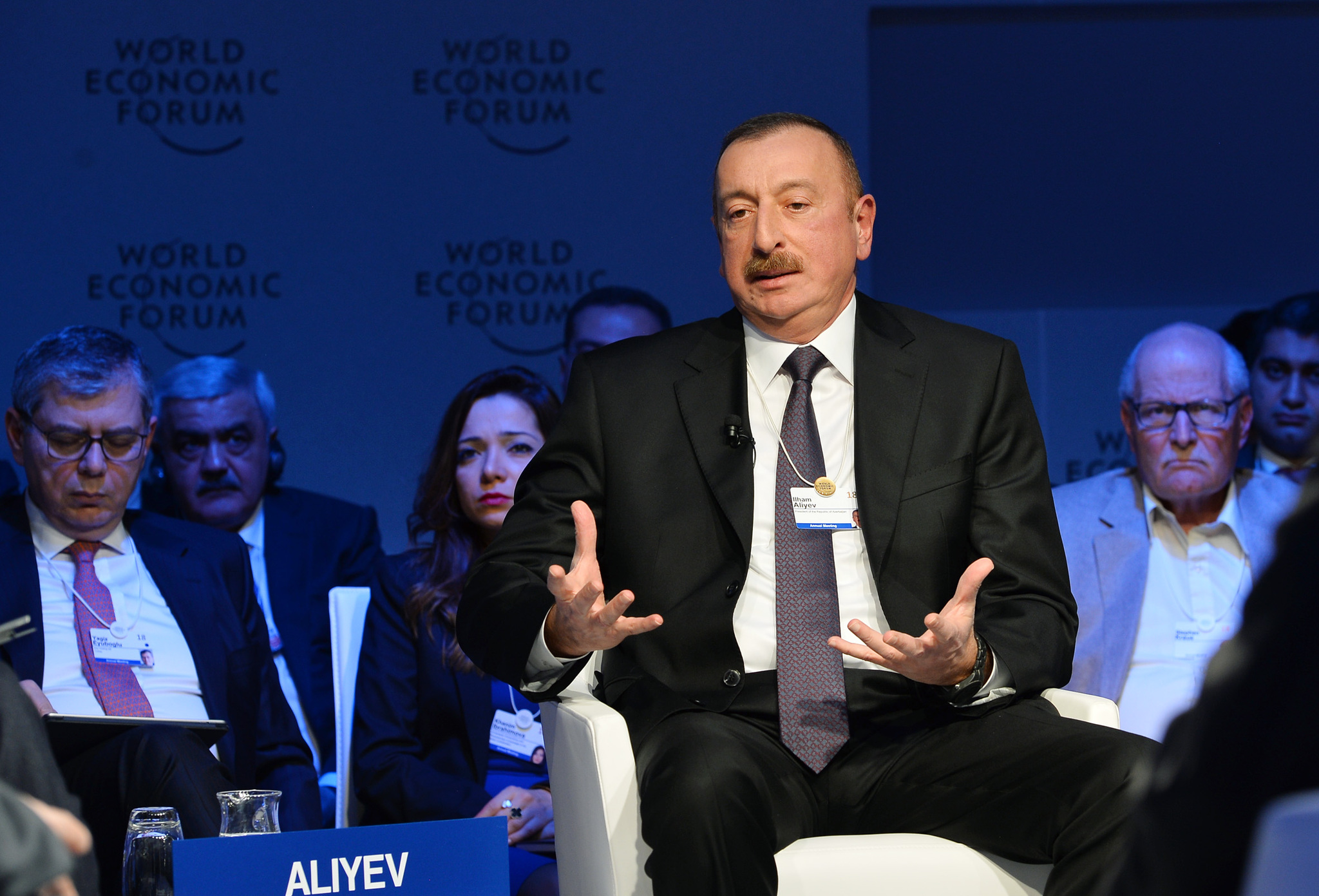 The organizers of the World Economic Forum (WEF) are gearing up to launch the next edition of the forum's Annual Meeting, which will gather top officials from around the world, including Azerbaijan's President Ilham Aliyev in the Swiss city of Davos on January 21-24.

Before hosting President Aliyev, the WEF's official website published an article authored by the Azerbaijani leader, where he provided a comprehensive insight into the role of Azerbaijan in a cohesive and sustainable world as a strategic transport hub and key energy player.

In the light of Azerbaijan's contribution to the global and European energy security, President Aliyev said Azerbaijan has continued to successfully implement energy projects, including the Southern Gas Corridor mega project.

"Supporting the EU’s [European Union] efforts to diversify gas supply, Azerbaijan has implemented the Southern Gas Corridor," he said in the article published to the WEF website. "This 3,500-km project will change the energy map of the entire region by bringing natural gas from the Caspian region to European markets. Rather than an alternative to Europe’s gas supply, the Southern Gas Corridor provides a means of diversification."

Years of searches of the EU for diversified natural gas sources led to signing a joint declaration on the Southern Gas Corridor with Azerbaijan in 2011. The document was a milestone in the history of both Azerbaijan and the EU as it has for the first time earmarked Azerbaijani gas for European consumption.

With a total capital investment of $40 billion, the Southern Gas Corridor (SGC) megaproject will convey gas trapped in Azerbaijan's offshore Shah Deniz field beneath the Caspian Sea to as far as Italy in Southern Europe. Shah Deniz is considered one of the world’s largest gas-condensate fields, located on the deepwater shelf of the Caspian Sea, 70 km (44 mi) southeast of Baku. The field's largest partner and operator BP says it is the company's second-biggest discovery of its kind after the Prudhoe Bay oil field in Alaska. BP estimates the reserves of Shah Deniz to be about 1.2 trillion cubic meters (42.38 trillion cubic feet) of natural gas and 2.2 billion barrels of condensate.

SGC consists of the Shah Deniz-2 project and three pipelines that measure 3,500 kilometers in length and traverse six countries - Azerbaijan, Georgia, Turkey, Greece, Albania, and Italy. The expanded South Caucasus Pipeline, which measures 691 km (429 mi) in length, is the first segment of SGC connecting Azerbaijan, Georgia, and Turkey. The 1,850 km-long (1,150 mi) Trans Anatolian Pipeline (TANAP) is the largest and middle chunk of SGC stretching from the eastern border of Turkey to its western border with Greece. In Greece, the European part of the corridor starts in the final pipeline of the structure - the 878 km-long (546 mi) Trans Adriatic Pipeline (TAP) that connects Greece, Albania, and Italy.

Shah Deniz field is expected to deliver 16 billion cubic meters (bcm) of gas to Turkey and the European Union. Six bcm of the overall supplies are slated for Turkey, which has been receiving commercial gas via TANAP starting June 2018. Although TANAP joined TAP on the Turkish-Greek border on November 30 in 2019, Azerbaijani gas has not yet reached Italy due to TAP's uncompleted construction.

"The fourth phase of the project is the Trans-Adriatic Pipeline (TAP). The length of the pipeline is 878km and 90% of construction is completed. The pipeline runs from Greece via Albania through to the Adriatic Sea to Italy. This year, it is slated to begin transporting Azerbaijani gas to Europe," President Aliyev said in the article published to the WEF website.

For the consumption of 512 million people living in 28 countries in the European Union, around 401 billion cubic meters of gas were imported in 2018, which is 0.6 percent more than in 2017. Russia and Norway were the dominant exporters of gas into the EU. The gas imported in pipelines shared 82 percent of the overall European gas purchase. In 2010, this figure stood at 69 percent.