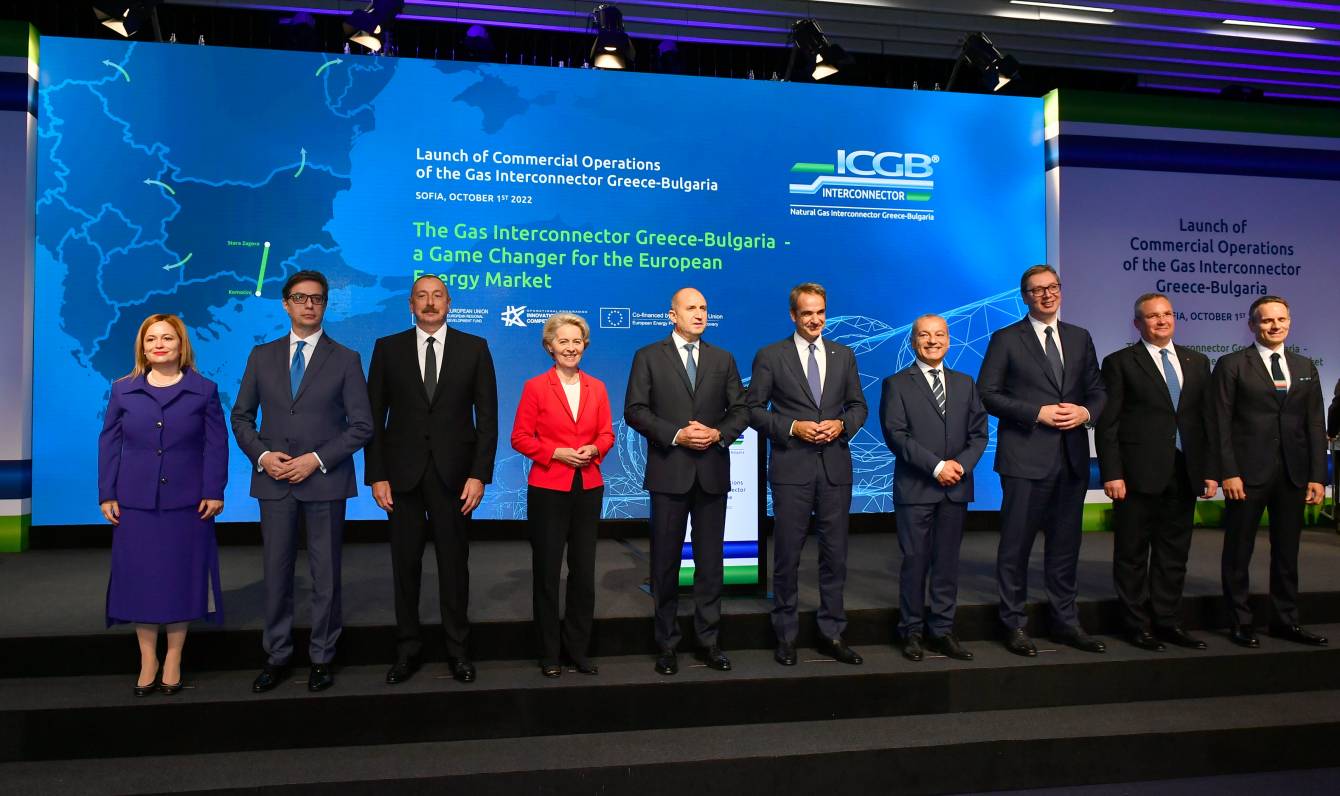 Azerbaijan's President Ilham Aliyev inaugurated on Saturday the Greece-Bulgaria Interconnector (IGB) that will enable the first-ever direct supply of Azerbaijani natural gas from the Caspian Sea to the Bulgarian markets.

While addressing the inauguration ceremony in Sofia, President Aliyev said the IGB project would play an important role in strengthening the energy security of Europe and diversification of gas supplies.

“For almost two years, Azerbaijani gas is on the European market and now in Bulgaria,” President Aliyev said, further mentioning the Southern Gas Corridor (SGC), a mega pipeline designed to support the increase and diversification of European energy supplies.

According to President Aliyev, in 2021, Azerbaijan's total gas export amounted to around 19 billion cubic meters (bcm), of which 8.2 bcm was sent to Europe, making an increase of 40 percent as compared to 2020. He further said that Azerbaijan would increase its export up to more than 22 bcm, of which 11.5 bcm will go to European consumers.

President Aliyev also recalled the Memorandum of Understanding signed between Azerbaijan and the European Commission to double the supply of Azerbaijani natural gas to Europe by 2027.

Since December 31, 2020, Azerbaijan has been supplying natural gas to Europe via the Trans Adriatic Pipeline (TAP), which forms the final segment of the Southern Gas Corridor. TAP starts at the Turkish-Greek border and runs along 773-kilometer onshore and 105-kilometer offshore routes traversing Greece and Albania toward its final destination in Italy.

Currently, the European market accounts for the largest share of daily gas exports from Azerbaijan. European consumers are supplied with about 27 million cubic meters of Azerbaijani gas per day. Starting in 2023, Azerbaijan is expected to supply 12 bcm of gas to the European Union. By 2027, the total volume of gas deliveries is forecast to reach 20 bcm annually. President Aliyev said that Azerbaijan's proven gas reserves of 2.6 trillion cubic meters make it possible to send more blue fuel to European consumers.

The European Union countries have been experiencing a steep gas crisis amidst the escalation of an economic conflict between the West and Russia – the largest supplier of natural gas to Europe. In 2021, the EU’s gas imports from Russia stood at 155 bcm, sharing 45 percent of the bloc’s overall natural gas imports.

However, since Russia's invasion of Ukraine, supplies dropped due to the West’s economic sanctions against Moscow. Russia’s state-run energy operator Gazprom halted gas exports to Poland and Bulgaria as it demanded the payments to be made in Russian roubles.

In April, European Commission President Ursula von der Leyen said “the era of Russian fossil fuels in Europe will come to an end” as the EU leaders agreed to reduce imports from Russia by 66 percent by the end of 2022 and stop supply completely by 2027.

Gas supplies directly from the Caspian Sea to Bulgaria

Bulgaria previously imported Azerbaijani gas at the Kula-Sidirokastro border checkpoint with Greece through an existing line, the small capacity of which made it possible to transport only 250-300 million cubic meters of gas per year to the country. The lion's share or 3 billion cubic meters of the country's purchases traditionally came from Russia.

The technical capacity of IGB is estimated at 3 bcm per year with room for expansion up to 5 bcm after the construction of a compressor station on Greek territory that would also allow for reverse flow.

As part of the development of the Southern Gas Corridor, Bulgaria and its neighbors will have access to alternative supplies from the Caspian region through IGB. The pipeline is seen as a game-changer for the Bulgarian energy market with its ability to increase competition and decrease the prices for consumers while securing diversified gas deliveries.

Teodora Georgieva, executive director of the IGB believes that the interconnector could not transform from an idea to reality without Azerbaijani gas.

“Azerbaijani gas volumes to Bulgaria provide the backbone of the project and fill a third of its pipeline capacity with potential for additional volumes,” she said.

“This is the first project in Bulgaria that brings real diversification of natural gas sources and ensures energy independence; the first fully automated gas pipeline in the country, and for its completion, we executed the third largest horizontally directed drilling in Europe. IGB will also be Bulgaria's only direct connection with TAP and will make the country part of the Southern Gas Corridor.”