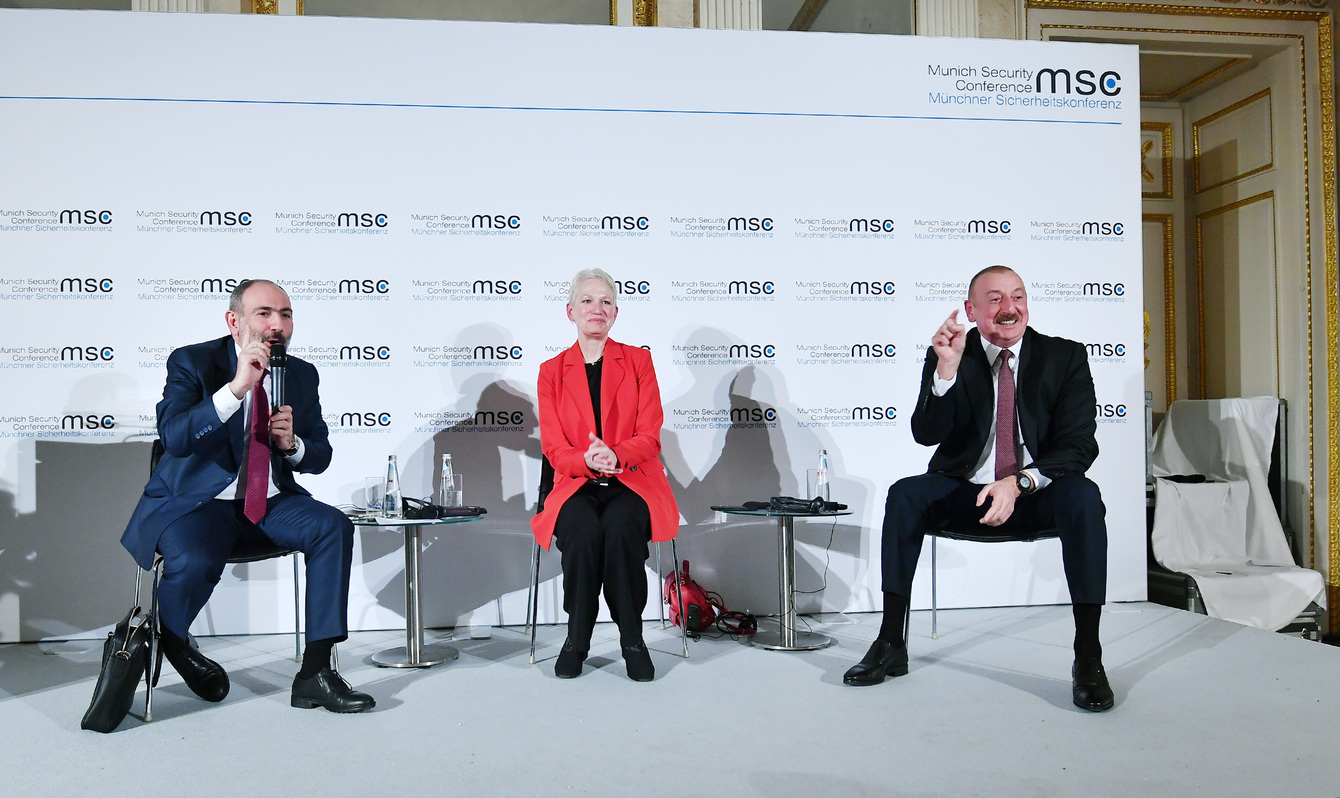 What has not happened during thirty years of the Armenia-Azerbaijan Nagorno-Karabakh conflict, took place within less than an hour in Munich last week when the leadership of Armenia and Azerbaijan sat for the first-ever tête-à-tête public debate over the long-lasting conflict in South Caucasus.

The panel discussion involving President Ilham Aliyev of Azerbaijan and Prime Minister Nikol Pashinyan of Armenia came off on the sidelines of the Munich Security Conference, an annual gathering of global leaders and policymakers, on February 15. During a discussion President Aliyev referred to historical facts and international documents in his remarks.

“In 1921, the Caucasus bureau of the Bolshevik party made a decision to retain Nagorno-Karabakh within Azerbaijan, to retain and not to transfer as some Armenian historians want to present,” Aliyev said, referring to a historical document that recognized the region as being part of Azerbaijan, according to the president’s official website.

The Soviet decision mentioned by Aliyev was followed by another that was issued by the leadership of the Azerbaijan Soviet Socialistic Republic and sanctioned by the Soviet government in 1923, giving the Nagorno-Karabakh region the status of an autonomous region within the borders of Azerbaijan.

But the region turned into a hotbed of conflict, as indigenous Azerbaijanis over time became displaced as a result of ethnic cleansing by Armenian forces. By the late 1980s, anti-Azerbaijan sentiments reached its climax in Armenia leading to the mass deportation of ethnic Azerbaijanis from the country. After the Soviet Union collapsed in 1991, Azerbaijan's Nagorno-Karabakh region was invaded by Armenia. The two countries fought a bloody war that lasted until a ceasefire in 1994.

“Our people were subject to ethnic cleansing and in 1992, previous Armenian regime committed a war crime, genocide of Khojaly. As a result, 613 innocent civilians, among them 106 women and 63 children were brutally killed,” Aliyev noted.

Khojaly was the pinnacle of ethnic cleansing against Azerbaijanis by Armenia during the occupation of Azerbaijan's Nagorno-Karabakh region. The town of Khojaly, located in Nagorno-Karabakh, was invaded late in the night on February 26, 1992. Reports indicate that the hundreds of civilian Azerbaijanis were scalped, burnt alive, and decapitated.

Speaking on Saturday’s panel, Prime Minister Pashinyan responded to Aliyev’s remarks about Khojaly by noting an interview by Azerbaijan’s first and former president, Ayaz Mutallibov with the Russian newspaper Arguments and Facts. According to Pashinyan, Mutallibov allegedly told the newspaper that provocation in Khojaly was organized by the opposition of Azerbaijan in order to oust him from power.

Mutallibov did not waste any time after the news from the conference spread to hit back.

“A statement by the prime minister of Armenia, Nikol Pashinyan, in which he claims that I spoke about the involvement of Azerbaijanis in the Khojaly genocide, is absurd,” Mutallibov said according to 1news.az. “In an interview with a Russian newspaper regarding the events in Khojaly, I talked about the fact that there is an unconditional Armenian trace there.”

"I did not use the phrase that the Azerbaijanis committed the Khojaly genocide, this is ridiculous,” Mutallibov added.

Over the past year especially, Pashinyan has been pushing a plan to have the self-declared illegal regime in the occupied regions of Azerbaijan be a party to any political settlement between Azerbaijan and Armenia – a position that is unacceptable to Baku. President Aliyev said any talks regarding the deep-seated conflict should be held between Armenia and Azerbaijan only, which is a format that is recognized by international arbiters that form the OSCE Minsk Group.

“Armenia stops funding this illegal entity, Armenia pulls back all their military troops from Nagorno-Karabakh and completely withdraws from our territory. And then, we will have arguments to talk to this people,” Aliyev said. “But until then there is no way.”

Noting Azerbaijan’s multiethnic makeup, Aliyev said, “Azerbaijan is a multi confessional and a multi-national country. There are many national minorities in Azerbaijan who live in peace and dignity. And when our territorial integrity is fully restored, Armenians as national minority will enjoy all the rights and privileges as any other representative of any other nation in our country.”

Prime Minister Pashinyan insisted that forces stationed in Nagorno-Karabakh are for “self-defense,” and that resolution to the conflict is not possible without defining the status of the people now living there.

But Aliyev was adamant that there are no "self-defense" forces and the majority of the military stationed in the occupied Nagorno-Karabakh region is comprised of soldiers from Armenia, and if Armenians living in the region want to be self-determined, they need to do it someplace else.

"Armenian people self-determinated themselves, they have Armenian state. My advice is to find other place on Earth to self-determinate them for the second time, not in Azerbaijan," he said in his closing remarks.

The Nagorno-Karabakh region and seven surrounding districts of Azerbaijan are still under Armenian occupation, despite four United Nations Security Council Resolutions for Armenian forces to fully withdraw from the region.