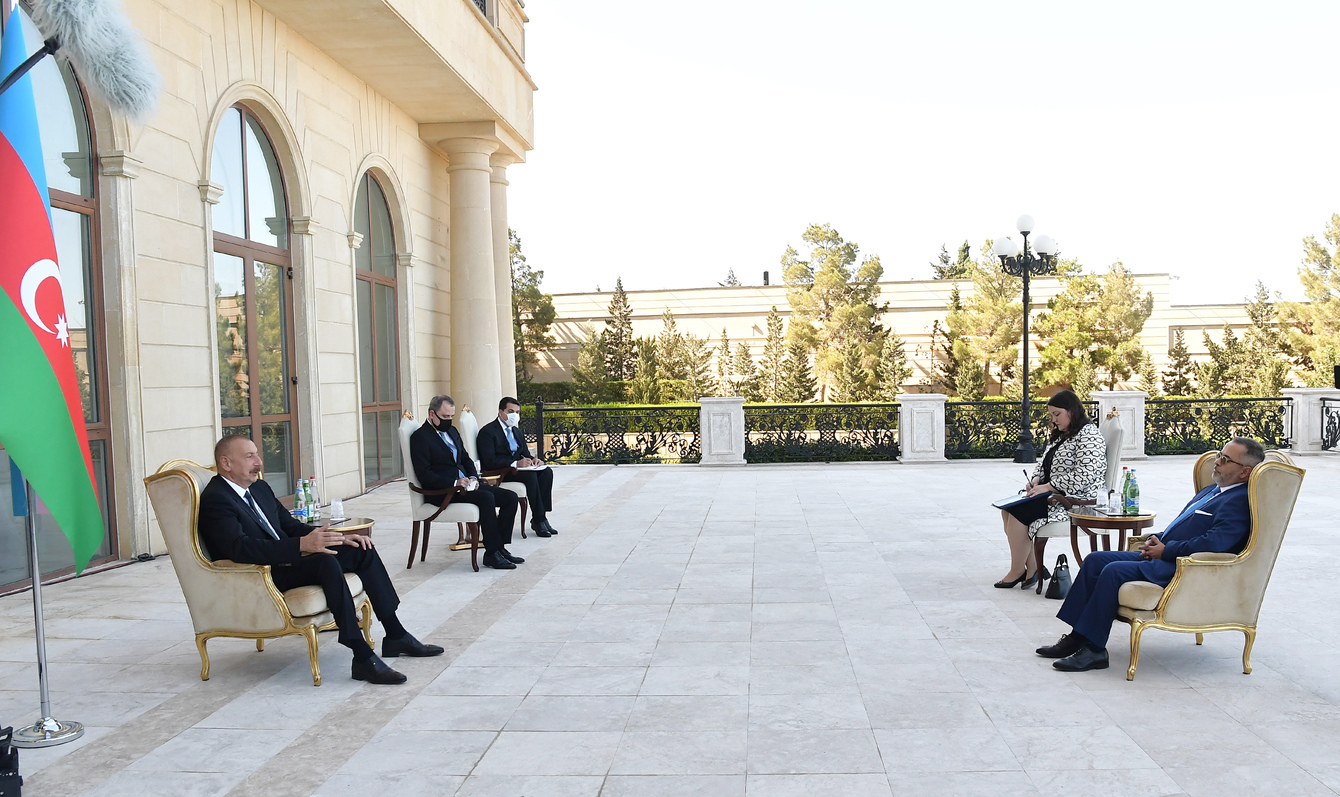 Azerbaijan's President Ilham Aliyev has voiced concerns over military cooperation between Greece, Cyprus and Armenia during a meeting with the newly appointed Greek ambassador to Azerbaijan, September 2, 2020, Baku, Azerbaijan / President.Az

Azerbaijan's President Ilham Aliyev has voiced concerns over military cooperation between Greece, Cyprus and Armenia, as the latter poses an existential threat to Azerbaijan due to its occupation policy and aggressive behavior.

"Armenia is a country which occupies our territories, committed the act of genocide in Khojaly, made a million of Azerbaijanis homeless, destroyed our historical, cultural and religious monuments, committed the policy of ethnic cleansing on the occupied territories, is violating the international law and is not complying with the UN Security Council resolutions and other organizations," President Aliyev said Wednesday during a meeting with the newly appointed Greek ambassador to Azerbaijan, Nikolaos Piperigos, according to President.Az.

President Aliyev went on to add that "military cooperation with Armenia is something which we are concerned of, because it possesses the existential threat to Azerbaijan because using these weapons they kill our military servicemen, they kill civilians." He also cited a Russian arms shipment to Armenia in July as an example of Baku's concerns.

"The active clashes stopped on July 16, and starting from July 17 until yesterday – yesterday was the last flight – there have been numerous cargo flights from Russia to Armenia through the Caspian littoral states’ airspace," he said, adding that trilateral cooperation between Greece, Cyprus and Armenia is a cause for concern.

Armenia and Azerbaijan fought a short but bloody war from July 12-16. Armenia's shelling of Azerbaijani positions in the Tovuz district on the border inflamed already strained tensions. Armenian troops targeted civilian areas killing a 75-year-old Azerbaijani resident. In total, Azerbaijan lost 12 servicemen, including one general, in the fighting.

Azerbaijan uncovered regular flights from Russia to Armenia, both during and after the war. On August 12, President Aliyev voiced his concerns over such arm deliveries during a phone call with his Russian counterpart Vladimir Putin. In an bid to downplay the significance of the flights, Russian Defense Minister Sergey Shoigu visited Baku and noted that the planes were carrying construction materials and Russian personnel serving at the 102nd military base in Armenia. The explanation, however, was met with skepticism from Hikmat Hajiyev, a senior aide to President Aliyev, who has asked Moscow to clarify its intentions behind the arms shipments.

While Russia is Armenia's strongest military ally, Yerevan has been trying to diversify its defense cooperation. On February 28, defense ministers of Armenia, Greece and Cyprus signed a trilateral action plan in the Greek capital city of Athens. Under the plan, the three countries would participate in joint training activities and hold regular meetings on military-political issues.

Additionally, Armenia signed a bilateral cooperation agreement with Greece, paving the way for 20 joint events between the two countries.

The first trilateral meeting of foreign ministers from Armenia, Greece and Cyprus was held in Nicosia, the capital of Cyprus, in June 2019. The countries agreed to establish economic, cultural and political ties for mutually beneficial cooperation amidst strained relations with Turkey. All three countries consider Turkey as a common enemy given Greek-Turkish tensions in the Eastern Mediterranean including the Cyprus conflict and strained relationship between Armenia and Turkey.

In a meeting with the new Greek ambassador to Baku, President Aliyev highlighted Azerbaijan's official position in light of the recent tensions between Greece and Turkey in the Eastern Mediterranean.

"Turkey is not only friend and partner, it is our brotherly country. And we support and will support Turkey in all the cases without any hesitation," President Aliyev said. "We support them in all the issues, including in the issue of their exploration in the Eastern Mediterranean."