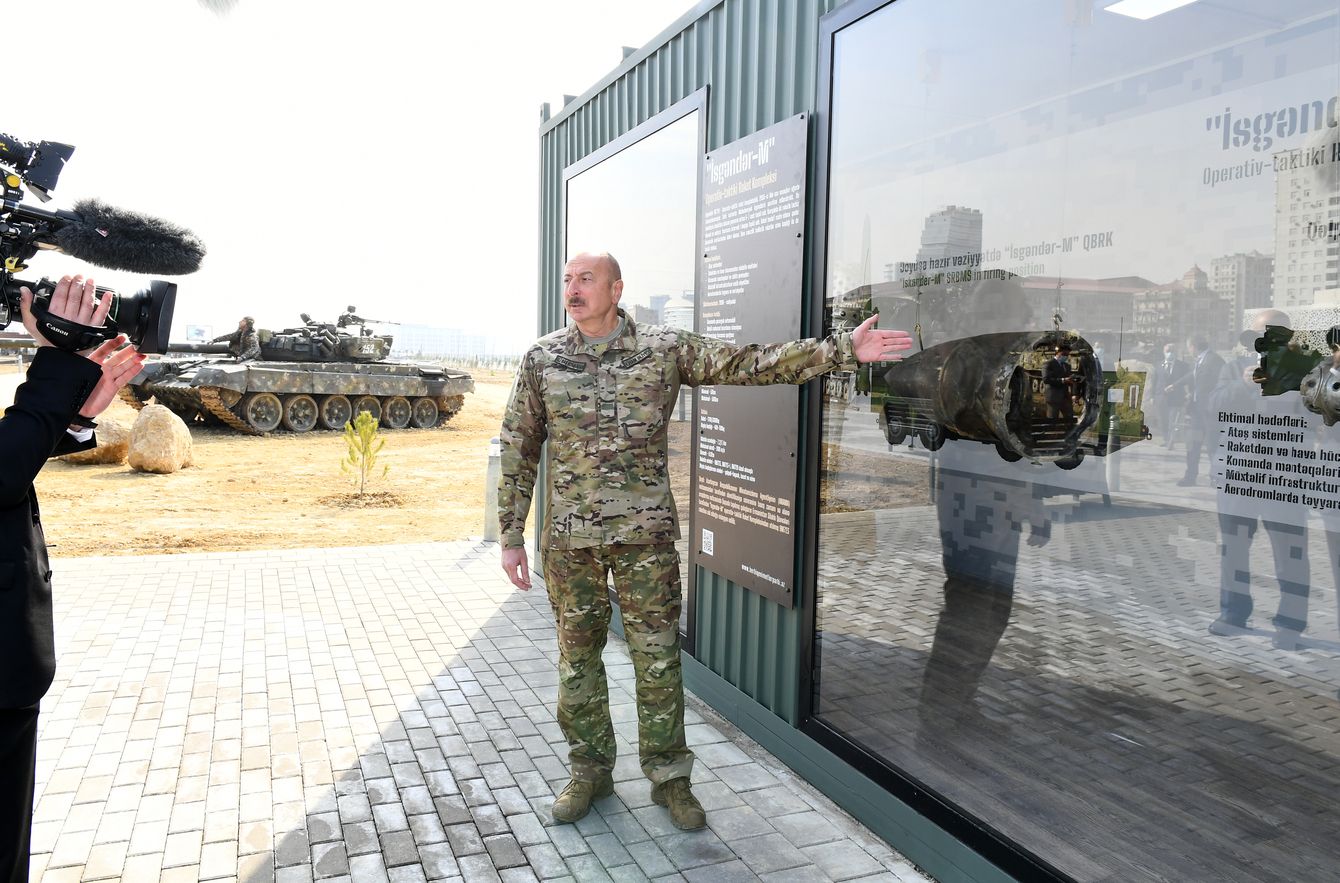 President Ilham Aliyev points out at the debris of Iskander-M missiles put on display at the newly launched Military Trophy Park in Baku, Azerbaijan, April 12, 2021 / President.Az

Azerbaijan’s President Ilham Aliyev demanded an official explanation on the launch of lethal Iskander ballistic missiles by Armenia on the city of Shusha during last year’s war in the Karabakh region.

Calling the move a "war crime", President Aliyev demanded answers and clarifications about Armenia's use of the Russian-made missiles.

“Where did the Armenian army get these missiles from? These missiles should not have been [in Armenia’s arsenal]. This is already visual evidence. It is evidence of Armenia's war crime and we want an answer,” President Aliyev said.

“We have not received an answer yet. But we will get. Let everyone come and see how Armenia was trying to destroy Shusha, our ancient city, with 'Iskander-M' missiles. They used it after we liberated Shusha. We have enough information. We are just waiting for an official statement," Aliyev added.

The fragments of the Iskander missiles are being demonstrated in a newly launched theme park in Azerbaijan’s capital city of Baku. The park, dubbed “Military Trophy Park,” features dozens of Armenia’s military equipment destroyed or captured by the Azerbaijani forces in the Second Karabakh War last year.

Mine clearance specialists of Azerbaijan unearthed the debris of two Iskander missiles on the outskirts of the Azerbaijani city of Shusha on March 15. It was later confirmed to belong to an M-type or more lethal version of the Russia-made missile, which is not listed in the arsenal of the Armenian army.

The Russian-made 9K720 Iskander, which is also known as SS-26 Stone in NATO reporting name, is a road-mobile short-range ballistic missile (SRBM) with a range of up to 500 kilometers. The system deploys both 9M723 ballistic and 9M728/29 cruise missiles. The Iskander supports different conventional warheads such as a cluster munitions warhead, a fuel-air explosive enhanced-blast warhead, a high explosive-fragmentation warhead, an earth penetrator for bunker-busting, and an electromagnetic pulse device for anti-radar missions, as well as nuclear warheads. Armenia has reportedly received the Iskander missiles from Russia in September 2016.

In Armenia’s arsenal, there are E-type (Э) rockets classified as “export ware” by the manufacturer in Russia. The strike range of the E-type Iskander is 200-280 kilometers, while the M-type projectile can fly up to 500 kilometers, according to the technical characteristics of the missiles. The Iskander-M missile is considered solely for the use of the Russian army. During the last year’s 44-day war in Azerbaijan’s Karabakh region, Armenia's forces reportedly had at least four Iskander missile systems in service.

President Aliyev said Russia's dismissal of the news about the deployment of Iskander by Armenia in the Karabakh region raises questions about Moscow's control of the military warehouses in Armenia.

"How do they know when he says, "Armenia has not used a missile, all the" Iskander "missiles are in warehouses"? Do they control Armenia's warehouses? If they control Armenian warehouses, then who controls this missile? Mr. Putin's spokesman, Mr. Peskov, then made a statement. He said that "Iskander" was not used. "Iskander" is here, you can go and see it, it is a 15-minute drive. I saw it yesterday in the Military Trophy Park."

Armenia’s use of the Russian Iskander missile for striking Azerbaijan has first made headlines in November when a former Armenian army chief, Movses Hakobyan, admitted to the use of the rocket during the war. In February, Armenia’s Prime Minister Nikol Pashinyan confirmed Hakobyan’s remarks by saying that the Armenian military fired the Russian-made missile in the last days of the war, but it did not explode or explode by 10 percent. Former chief of general staff of the Armenian army, Onik Gasparyan said he was allowed once to use Iskander for an attack on Shusha.