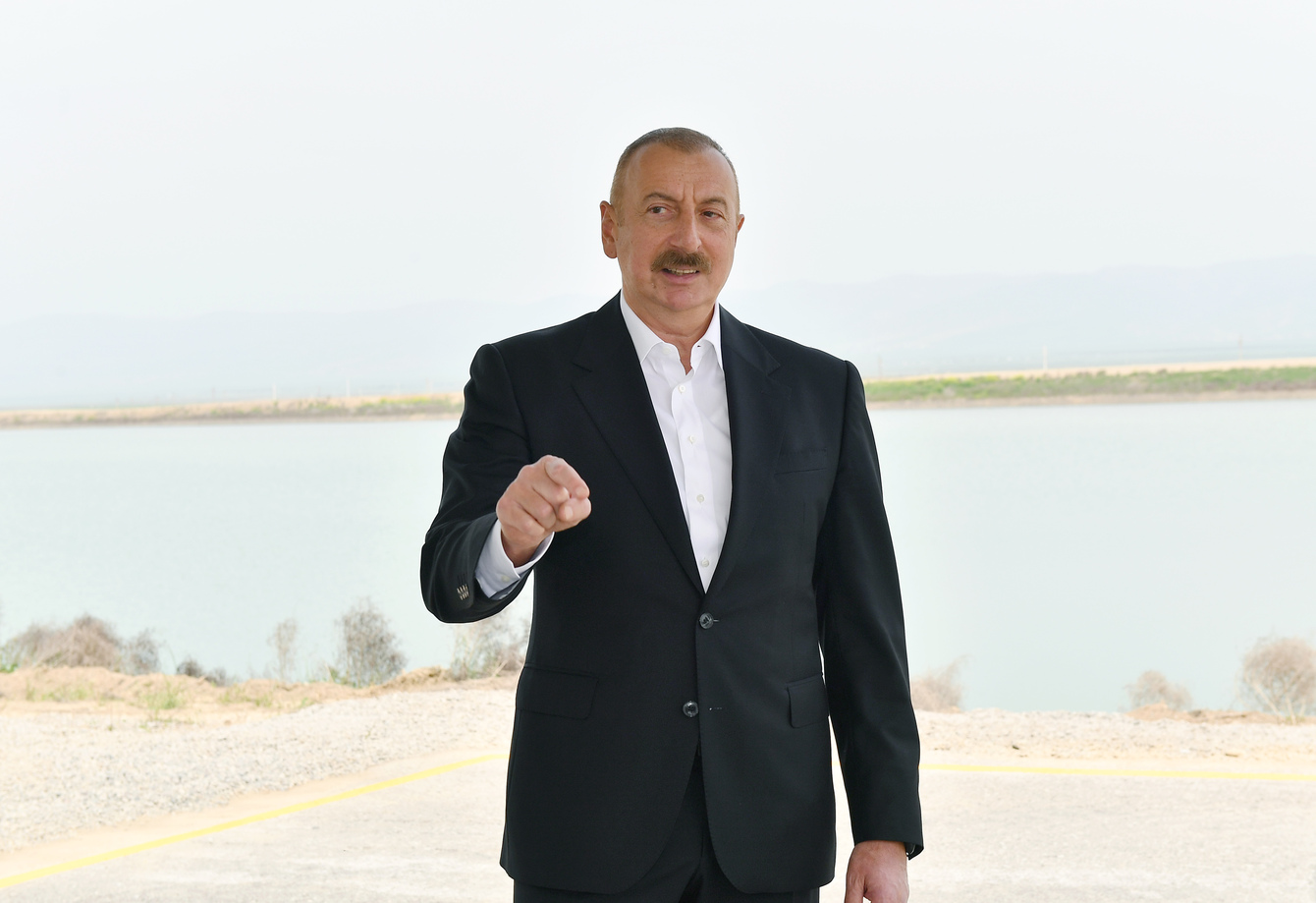 President Aliyev gave a speech to Azerbaijan Television as part of his visit to the Hajigabul district on April 20, 2021 / President.Az

Azerbaijan is not satisfied with Moscow's response, which dismissed the launch of Iskander-M ballistic missile by Armenia during the last year's Karabakh war, although its debris found on the battlefield is now displayed in Military Trophy Park in Baku.

Azerbaijan’s President Ilham Aliyev said the Russian response is not complete and added that the main question is how Armenia acquired the more lethal M version of the Russia-made missile that is banned for export.

“There are only two ways: either by smuggling or in violation of international norms and regulations because the Armenian army can only have Iskander-E, which is an export version of the missile. There is a huge difference between them. The range of Iskander-E missiles is 280 kilometers. Iskander-M is a long-range missile. Its range is 500 kilometers. So the Armenian army could not have Iskander-M missiles in its arsenal,” President Aliyev explained, according to President.Az.

President Aliyev dismissed accusations against Azerbaijan by the Russian media outlets about the transfer of the debris of the Iskander missiles from Syria to the Karabakh region. He said it is clear to Baku "when and why these missiles were fired, but an official response must be given from Armenia, which dropped these missiles on us, and Russia."

“These missile systems were either handed over to Armenia or were stolen and taken out of Russia. There is no answer to these questions. Of course, this is an unpleasant situation,” the Azerbaijani president said.

President Aliyev is convinced that the unexplained reasons for Armenia’s illegal acquisition of the ballistic missiles do not comply with the strategic partnership ties between Azerbaijan and Russia. He said that relations between strategic partners must be sincere.

“As for the smuggling theory, of course, this requires investigation, because during the war, a large supply of weapons was smuggled from Russia to Armenia,” Aliyev said, adding that Azerbaijan informed the Russian side about this issue at the highest level. "We know for sure that one Armenian arms dealer David Galustyan, based in Russia, illegally acquired weapons from Russian military factories and sent them to Armenia by passenger planes. The cost of these weapons was paid by Armenian oligarchs operating in Russia – Abrahamyan and Karapetyan. It is a crime."

Representatives of the national mine clearance agency of Azerbaijan found the fragments of two Iskander-M missiles in the city of Shusha in the country's Karabakh region in March. The fragments were later put on display at the newly opened Military Trophy Park in Azerbaijan’s capital city of Baku.

The Russian-made 9K720 Iskander, also known as SS-26 Stone, is a road-mobile short-range ballistic missile (SRBM) with a range of up to 500 kilometers. The system deploys both 9M723 ballistic and 9M728/29 cruise missiles. The Iskander supports different conventional warheads such as a cluster munitions warhead, a fuel-air explosive enhanced-blast warhead, a high explosive-fragmentation warhead, an earth penetrator for bunker-busting, and an electromagnetic pulse device for anti-radar missions, as well as nuclear warheads.

The Iskander missile system is produced in two variants: Iskander-M and Iskander-E. The M version is intended for use by the Russian military, while the E type is purposed for export. Russia dispatched the Iskander missiles, which were believed to be Iskander-E, to Armenia in September 2016. Armenia has demonstrated the newly purchased weapons in a military parade dedicated to the 25th anniversary of the country's independence on September 21 of the same year.

The debate around Armenia's use of the Russian Iskander missile for striking Azerbaijan surfaced in November when a former Armenian army chief, Movses Hakobyan, admitted to the use of the missile during the war. In February, Armenia’s Prime Minister Nikol Pashinyan confirmed Hakobyan’s remarks by saying that the Armenian military fired the Russian-made missile in the last days of the war, but added that it either did not explode or exploded by only 10 percent.

Armenia’s former chief of general staff Onik Gasparyan gave the most detailed description of Iskander’s launch on the Azerbaijani city of Shusha by admitting to the use of the missile once in order to take advantage on the battlefield. Gasparyan explained that Prime Minister Nikol Pashinyan had initially forbidden the missile’s deployment for the fear of international backlash, Forbes reports.