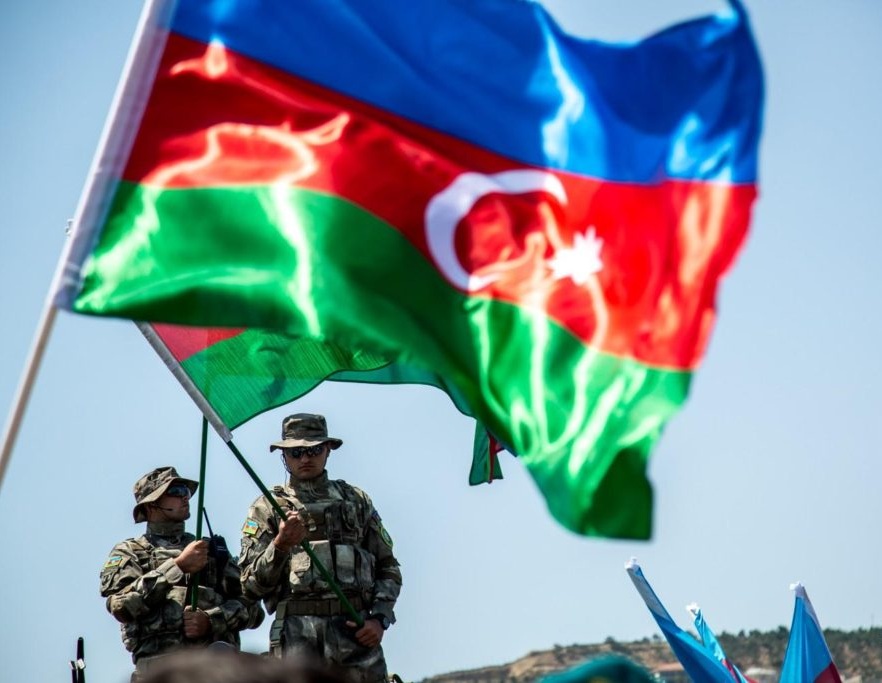 President Ilham Aliyev said there have been no clashes on the border, the situation is stable, and negotiations are underway. / Courtesy

Presidents of Azerbaijan and Russia discussed the recent events along the Armenia-Azerbaijan border in a phone conversation on Wednesday.

President Ilham Aliyev and President Vladimir Putin said the trilateral statements signed by Armenia, Azerbaijan, and Russia on November 10, 2020, and January 11, 2021, should be the basis for ensuring security and stability in the region. Political and diplomatic means should be activated to solve the issue, according to the presidents.

Armenian authorities have been alerting the international community about the recent developments in the Armenia-Azerbaijan state border. They have claimed that the Azerbaijani military has allegedly violated Armenia's border and entered the territory of the country. According to the Armenian media, Yerevan’s government has officially sent an application letter to the Collective Security Treaty Organization (CSTO) military bloc regarding its claims last week. Armenia is a member of CSTO along with Russia, Belarus, Kazakhstan, Kyrgyzstan, and Tajikistan, and under the organization’s charter, an intervention into the territory of a member state might activate collective assistance.

Azerbaijani authorities have refuted Armenia's claims and announced that the military forces of the country were taking necessary measures to protect the internationally recognized borders of Azerbaijan.

In a phone talk with Kazakhstan's President Kassym-Jomart Tokayev on Monday, President Aliyev said recent events along the Azerbaijan-Armenia border are part of the ongoing process for identifying the borders, which began after the end of last year's war in the Karabakh region of Azerbaijan.

The president said the Armenian side is showing an inadequate reaction to this process. According to him, Armenia's appeal to the Collective Security Treaty Organization is an unfounded attempt aimed at internationalizing the issue, since there have been no clashes on the border, the situation is stable, and negotiations are underway to finalize the process.

On May 12, Armenian acting Prime Minister Nikol Pashinyan said that the Azerbaijani military allegedly crossed the state border near the Sev Lake (Garagol in Azerbaijani) and advanced up to 3.5 kilometers (nearly 2 miles) into Armenia.

Pashinyan also called Russia’s President Vladimir Putin to discuss the alleged “encroachment on the territory of Armenia". Following the phone conversation, President Putin reaffirmed Russia’s commitment to further active mediation and close contacts with Yerevan and Baku in the interest of ensuring stability in the region.

Officials at the Foreign Ministry of Azerbaijan said that with the improvement of weather conditions in the liberated regions of Azerbaijan that border with Armenia, Azerbaijan continues its work on the border protection system carried out within the territorial integrity of Azerbaijan.

According to the ministry, the process is carried out in line with the maps available in both Baku and Yerevan that define the border between the two countries.

“We always stand for the respect of the sovereignty, territorial integrity and inviolability of the internationally recognized borders,” the ministry’s spokesperson Leyla Abdullayeva said. “Certainly, mutual respect for these principles, establishing good neighborly relations on this basis and embarking on the border delimitation / demarcation process in good faith is the only way forward to settle any dispute that might arise. Armenia and Azerbaijan have newly emerged from the war and successful border demarcation and delimitation are key to peace and security.”

Abdullayeva went on to accuse Armenian authorities of using inadequate and provocative rhetoric against Azerbaijan as a political tool before the forthcoming parliamentary elections in the country. She called on the Armenian government to work constructively with the Azerbaijani side to solve border issues through the bilateral channels.

Armenians will go to the polls on June 20 to elect the country’s parliament. The “Civil Contract” party of Pashinyan is among the election hopefuls. Pashinyan resigned on April 25 but remains in office as an acting prime minister of Armenia. He has already been touring the country to meet with the electorate. Political analysts condemn him for resorting to populism, including the use of topical political issues and making campaign-style promises in an effort to lure voters.