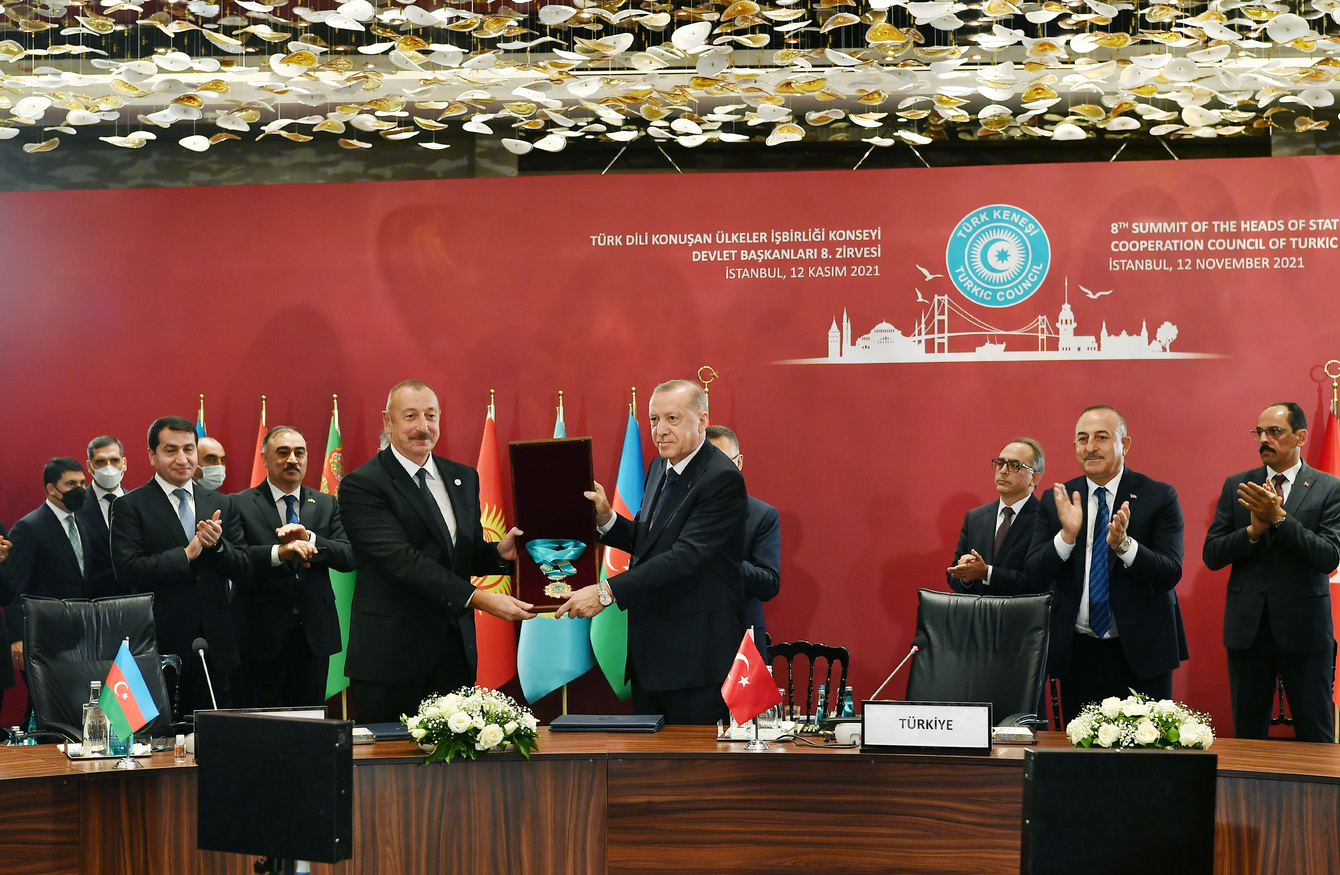 Azerbaijan’s President Ilham Aliyev has been awarded the “Supreme Order of Turkic World,” the first-ever order symbolizing the unity of the Turkic-speaking states.

The award ceremony took place at the 8th Summit of the Cooperation Council of Turkic-Speaking States held in Istanbul this week.

President Aliyev has been presented the top award by Turkish President Recep Tayyip Erdogan upon a decision signed by the leaders of Turkey, Kazakhstan, Kyrgyzstan, and Uzbekistan.

“In recognition of the historic victory that ensured the liberation of the territories of the Republic of Azerbaijan and the restoration of its territorial integrity under the leadership of His Excellency Ilham Aliyev, the President of the Republic of Azerbaijan, the Commander-in-Chief, which significantly contributed to the Turkic unity and paved the way to achieving enduring peace and stability in the region, the Council of Heads of State, upon the proposal of the President of the Republic of Turkey, His Excellency Recep Tayyip Erdogan, hereby decided to award with great honor His Excellency Ilham Aliyev with the “Supreme Order of Turkic World,” reads the decision.

While presenting the order, President Erdogan said the liberation of the Azerbaijani lands from Armenia’s occupation last year was of great importance for the entire Turkic world. He further added that “the re-establishment of Azerbaijan’s territorial integrity has expanded the unity and equality of the Turkic world” and “paved the way for lasting peace, stability, and cooperation in the region.”

President Ilham Aliyev, in his turn, expressed his gratitude on behalf of Azerbaijani people as he believed that the award was presented to all the people of Azerbaijan.

“We have put an end to nearly 30 years of occupation. We have implemented the resolutions, which were adopted by the United Nations in 1993 but remained on paper. We have restored historical justice, we have restored international law, we have restored our national dignity. This Victory is of historic significance because it was a just war,” President Aliyev said, referring to the 44-day war with Armenia, and adding that Azerbaijan fought on its own land and have never set sights on the lands of other countries.

Armenia and Azerbaijan had been in an armed conflict for nearly 30 years over the Karabakh (Garabagh) region, an internationally recognized territory of Azerbaijan. Armenia launched full-blown military aggression against Azerbaijan following the Soviet Union’s dissolution in 1991. The bloody war lasted until a ceasefire in 1994 and saw Armenia occupying 20 percent of Azerbaijan’s internationally recognized territories. Over 30,000 Azerbaijanis were killed, and one million were expelled from those lands in a brutal ethnic cleansing policy conducted by Armenia. Although the United Nations Security Council adopted four resolutions in 1993 demanding the immediate withdrawal of the occupying forces from Azerbaijani lands and the return of internally displaced Azerbaijanis to their ancestral lands, Armenia failed to comply with all four legally binding documents.

On September 27, 2020, the decades-old conflict took a violent turn after Armenia’s forces deployed in the occupied Azerbaijani lands shelled military positions and civilian settlements of Azerbaijan. During the counter-attack operations that lasted 44 days, Azerbaijani forces liberated over 300 settlements, including the cities of Jabrayil, Fuzuli, Zangilan, Gubadli, and Shusha, from nearly 30-year-long illegal Armenian occupation. The war ended in a tripartite statement signed on November 9 by Armenia, Azerbaijan, and Russia. Under the statement, Armenia also returned the occupied Aghdam, Kalbajar, and Lachin districts to Azerbaijan.

The liberation of Azerbaijan’s lands has opened up ample opportunities to reshape the regional economy, trade, and transportation.

On January 11, 2021, Azerbaijan, Armenia, and Russia signed a statement in relation to the unblocking of all economic and transport communications in the region.

The government of Azerbaijan is currently working to open up the Zangazur corridor, a multimodal transport route connecting mainland Azerbaijan with its inseparable part of Nakhchivan and further with Turkey through modern-day Armenia’s territory.

The restoration of transport communications will also allow Armenia to have railway access to Russia and Iran via Azerbaijan’s territory. Moreover, Russian and Turkish railway grids will be interconnected with the opening of regional transport connections.